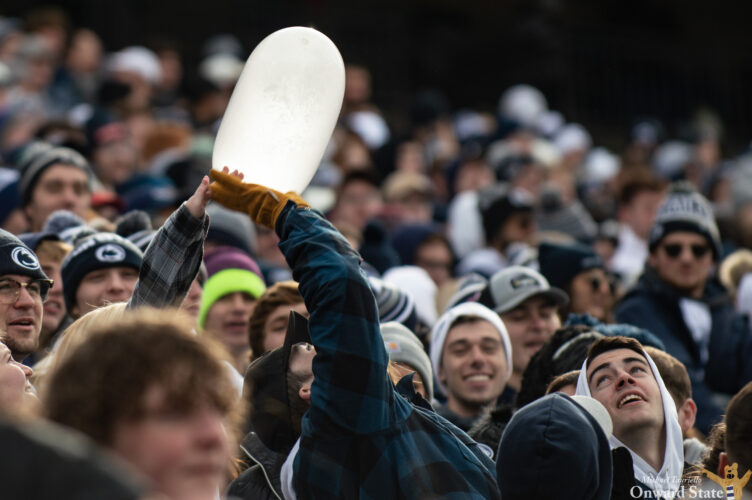 Saturday was the final trip to Beaver Stadium for thousands of Penn State seniors, including myself. Luckily, the Nittany Lions sent us packing with a solid win over Rutgers.

As always, gameday in Happy Valley had a lot going on. From the tailgate lots to the bleachers, here’s what we observed on Saturday.

Can we cut the crap when counting Beaver Stadium attendance? Saturday’s announcement of 106,038 fans was a total joke if you looked around the stadium at literally any point. I mean, come on.

During the game, Penn State invited about a dozen members of its 1976-77 cheerleading team out to the end zone to recognize a special anniversary.

In case you didn’t know, this cheer team is largely credited with originating Penn State’s “We Are” chant. Sure, Wally Triplett (might have) famously coined the phrase, but the cheerleaders introduced it to the Nittany Lion faithful at Beaver Stadium. Surprisingly, the cheer took quite a few years to catch on.

At any rate, having the team back in Happy Valley this weekend was special. It served as both a nice tribute and a good history lesson for fans at Beaver Stadium on Saturday.

Pat McAfee would’ve been proud of this weekend’s showdown.

Above all else, Penn State-Rutgers was a full-on punting clinic. In the first half, the Nittany Lions and Scarlet Knights traded off 12 straight drives that resulted in a punt. In fact, 10 of the game’s 18 total punts were forced on three-and-out possessions.

Across the game, both teams’ punts combined net 787 yards. Penn State averaged 42.9 yards per punt, while Rutgers led a bit with 44.4 yards per punt. Penn State punter Jordan Stout even earned a Big Ten Special Teams Player of the Week honor — his fourth of the season — following the impressive outing.

Thanks to that definitely-fewer-than-106,000 crowd, Beaver Stadium internet connections were finally not completely awful. Less-crowded servers let me and my friends scroll through Twitter while waiting for the game to pick up (and for the punting to stop).

When you’re freezing your ass off and watching Penn State play a less-than-exciting team, a good internet connection can go a long way. For the first time ever, posting a picture from the stadium didn’t take a dozen tries.

This weekend, 32 Nittany Lions walked across the Beaver Stadium turf alongside family members to soak in what could be their final moments as a student-athlete in Happy Valley. However, since all players across the NCAA were granted an additional year of eligibility, Senior Day appearances don’t necessarily imply the end for this group of Nittany Lions.

I loved seeing guys like Journey Brown and PJ Mustipher out there. Brown’s been a recurring face on the sidelines after getting his football career cut short due to a heart condition, but watching him stick around with the team and work his way to a degree has been nothing short of heartwarming. Mustipher’s season-ending injury was tough to swallow, too, but he seems to be making the most of it.

Who among this group will stick around? Who knows. Most of their decisions should roll in around or after Penn State’s bowl game, so we’ll hopefully find out soon. For now, we can enjoy the time we’ve had with ’em.

Student Section = For All Ages!

When far fewer folks are pouring into Beaver Stadium’s student section, most rules seem to go out the window. This weekend, I noticed many fans in the south end zone who certainly didn’t belong there.

Among my favorite honorary student section members included a family of six, two middle-aged women who were definitely former college roommates, and a group of Penn State dads who seemed to be reliving the glory days. The few security employees who were scattered throughout the stands did their best to keep non-students out, but most of those efforts were pretty futile in the end.

So far, we’ve seen the Symbol of Our Best don costumes resembling Bob Ross, Ferris Bueller, Freddie Mercury, and more. This week, though, we were treated to the Lion’s fatigues, which are typically worn during Penn State’s annual Military Appreciation Game. Nothing special, but still a solid fit.

Tune in next week to see Onward State’s official rankings of the Lion’s 2021 season ‘fits.

If you’re a true freshman quarterback coming off of a three-touchdown performance against a Big Ten opponent, you’d probably be pretty exciting heading into the locker room. Penn State’s Christian Veilleux took that excitement to a new level when he took a tumble heading into the tunnel on Saturday.

Veilleux was a good sport about it, though. He immediately made a funny face upon hitting the deck and even updated his Instagram profile picture to fully get in on the joke.

I’m 99.99% sure that “Football No. 2,” the second of three possible options on Beaver Stadium jumbotron shuffle, won the first six games this season. However, that incredible reign ended on Saturday when Football No. 3 emerged victoriously. I nearly leaped out of my seat in excitement, so let that be a testament to the exciting football game.