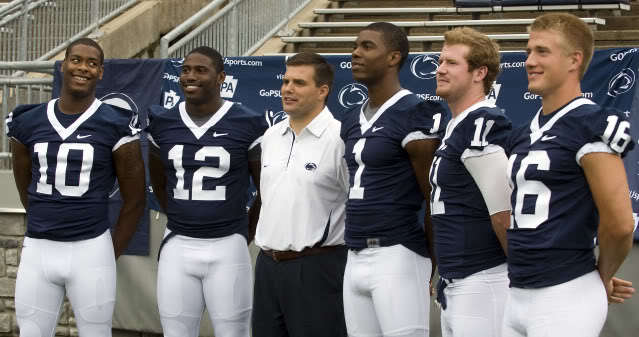 It has been a roller coster of a ride for two Penn State quarterbacks since the final regular season game against Michigan State, but it appears Rob Bolden and Kevin Newsome will both be back in blue and white for spring practices. But what happens beyond then remains unclear.

Bolden, who was the first true freshman quarterback to start a season-opener under Joe Paterno, was set to transfer after Penn State’s loss to Florida in the Outback bowl. But a denied transfer request from Coach Paterno, and desperate pleas from his mother and plenty of Penn State fans must have changed Bolden’s mind as he returned to campus for the start of spring semester.

It has also been rumored that Newsome, who did not make the trip to Tampa for the Outback Bowl, has returned to campus this semester. A recent Facebook status by Newsome supports the claim that he isn’t going anywhere.

I love PSU Forever. “Everything Aint gonna be easy now Kevin. Because everywhere in life there are going to be storms. SO IT’S ABOUT TIME YOU LEARNED HOW TO DANCE IN THE RAIN!!” — Papa the great

Whether he’s dancing in the rain or on the sidelines of Beaver Stadium, Newsome should be rejoining his teammates this spring, but his absence from the bowl trip certainly hurts his chances to compete for a starting position this spring.

If Newsome is playing this spring for the Nittany Lions, I expect it will be at a position other than quarterback.

On the other hand, Bolden’s return puts him back in the mix to earn the starting spot for the 2011 season. He will once again find himself pitted against former walk-on Matt McGloin, who finished the season as the starter. But perhaps the stiffest competition will come from classmate Paul Jones, who took a redshirt in 2010.

At 6-foot-3 and 230 pounds Jones was considered a four-star quarterback by Rivals.com, but he took his first year off due to academic issues.

Many believe Jones, who threw for two touchdowns in 2010’s Blue and White scrimmage, is favored to earn the starting position for 2011, but it will certainly be an open competition that will dominate headlines for another offseason.

With Jones and Bolden having seven years of combined eligibility remaining and only one starting position up for grabs, the topic of transferring will likely arise again– but for who?

Share via
Penn State Quarterbacks Bolden, Newsome to Stay for Now
https://onwardstate.com/2011/01/11/quarterbacks-bolden-newsome-to-stay-for-now/
Follow @onwardstate
Send this to a friend