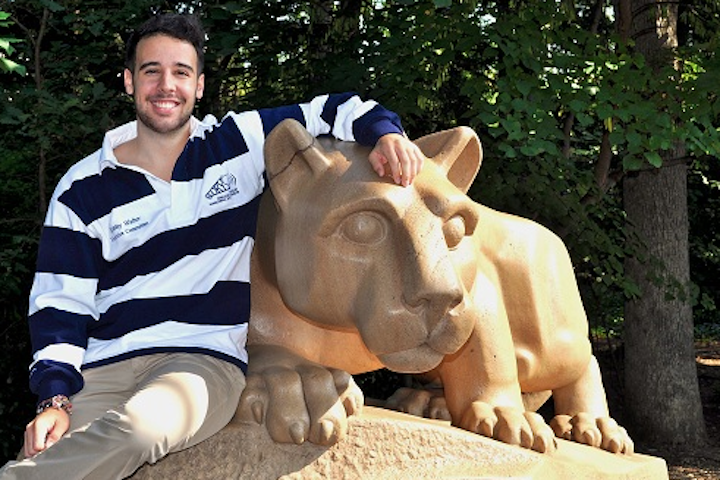 With the 2012 Homecoming celebration coming to a close a couple weeks ago, preparations for the 2013 Homecoming week are already underway. The first step in making that happen is naming the new Executive Director, who oversees all Homecoming operations. Bobby Walter — who served as the Homecoming Public Relations Director this past year — was named as the new 2013 Executive Director on Monday.

Walter was kind enough to answer 10 questions for us in the latest installment of our 10 question interview series.

Onward State: What does “For The Glory” mean to you?
Bobby Walter: To me, “For The Glory” means taking pride in being a part of something that is bigger than any individual. It’s working to improve your community and celebrating the the place that has influenced so many Penn Staters’ lives.

OS: What is your main goal for Homecoming 2013?
BW: Homecoming made an incredible amount of progress this past year with the addition of our Night 5K and adding new elements to our already existing events. This year, my goal is to strengthen the foundation that last year’s and previous years’ Homecomings have laid for us by striving to establish a solid image. I plan on reorganizing Homecoming internally so that anything that is put out by our organization portrays a clear, consistent brand and continuing to create interesting, new marketing techniques.

OS: What is your favorite Penn State tradition?
BW: Growing up in State College, the parade was something I looked forward to every year. Back then, I was mostly excited about the candy and dancing to the music that all the floats played, but now I’ve grown to enjoy every aspect of the nation’s largest collegiate parade (I do still enjoy both the candy and the dancing).

OS: What is an area you think can be improved from Homecoming 2012?
BW: A problem that we run into every year is people not being aware that there are Homecoming events every day during Homecoming week– some days there are even two or three. Going along with the idea of having a solid image or brand for Homecoming as an organization, is having students, alumni, faculty, staff and community members aware of what we do during Homecoming week. I look forward to working with the State College community this year in hopes to raise enthusiasm and involvement among locals.

OS: What was your first official act as Homecoming Executive Director?
BW: Today, I began reviewing the application process for students who are interested in applying to be on the Homecoming Executive Committee and will start reading final reports written by HEC 2012 this evening.

OS: Who is your favorite figure in Penn State history?
BW: I have a lot of respect for George Atherton and the decisions he made to guide our university towards where it is today.

OS: You’re now Homecoming Executive Director. How long will it take you to change your email signature?
BW: As soon as Bridgette (Executive Director for 2012) transfers the official email alias to my name. That’s actually something that I hadn’t thought of yet– still seems somewhat surreal.

OS: If you had a dinner party and could invite three people, who would you pick?
BW: Jean-Jaques Rousseau, Alexander McQueen, and Tina Fey.

OS: If you had a Creamery ice cream flavor named after you, what would it be?
BW: Blob’s Birthday Bash (Birthday cake ice cream with the little, colorful pieces that are in Funfetti icing).

OS: If you could be a dinosaur, which would you be, and why?
BW: Probably a Gigantoraptor… They have such fancy feathers.