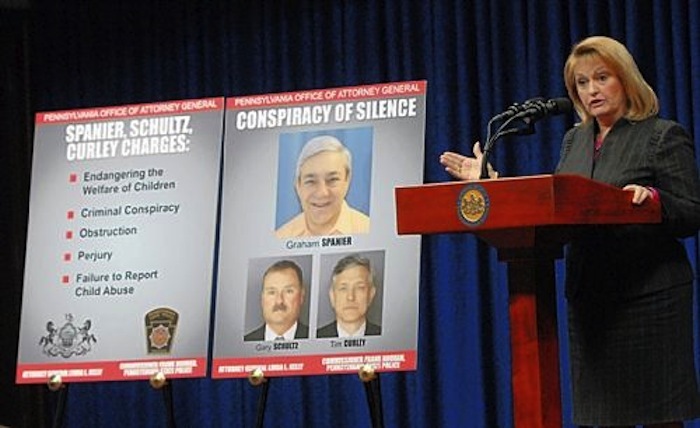 After two days of testimony, we’re officially going to trial.

Judge William Wenner ruled instantly after closing arguments this afternoon that all charges against Gary Schultz, Tim Curley, and Graham Spanier will stick. A trial date has not been set yet but is anticipated for the spring. Yahoo’s Dan Wetzel reports that legal experts think the contentious trial could last up to two months.

“It’s a tragic day for Penn State University for sure,” Judge Wenner said while making his ruling.

AG Investigator Anthony Sassano was the last witness to testify. He was one of the first investigators to interview Mike McQueary as part of the Sandusky investigation. The three attorneys attempted to paint a picture of coercion by the prosecution to get exaggerated statements by McQueary to make for a better case against Sandusky. Curley’s co-counsel Brian Perry asked Sassano to explain why Sandusky was acquitted of deviate sexual intercourse in the McQueary victim case in an intense line of questioning that had to be interrupted by Wenner.

“From Day one, Mike McQueary never said he saw penetration,” Sassano said. “He said he saw Jerry Sandusky behind a boy in a position he believed was penetration. They only way we would know is if the victim came forward or McQueary saw it.”

Perry wasn’t the only attorney to go after McQueary’s testimony. Spanier’s attorney Elizabeth Ainslie put it bluntly in her closing remarks.

“I believe Mike McQueary is making it up as he goes along,” Ainslie said, arguing that McQueary’s uncorroborated and inconsistent testimony is the only evidence against her client. “But in the end, he says nothing about Dr. Spanier. The evidence against Dr. Spanier is all innuendos and farfetched inferences.”

“We heard really nothing out of the ordinary from McQueary when he took the witness stand. Except we did hear some embellishment like we always do,” Roberto said during closing statements. “I really don’t know what foundation the prosecution is proceeding on.”

Ultimately, conviction probably rests on whether the prosecution can prove the three former administrators intentionally and knowingly failed to report child sexual abuse, rather than just honest negligence.  As Gary Schultz’s lawyer Tom Farrell put it, “There’s a difference between failing to make a report and interfering to make a report.”

Share via
We\'re Going to Trial: All Charges Stick in Curley/Schultz/Spanier Preliminary Hearing
https://onwardstate.com/2013/07/30/were-going-to-trial-all-charges-stick-in-curleyschultzspanier-preliminary-hearing/
Follow @onwardstate
Send this to a friend