Penn State’s mission to the moon, the Lunar Lion, has booked its 2015 flight to space with Team Phoenicia LLC.

The Lunar Lion is the only university-led team competing for the Google Lunar X Prize — the “largest international based prize of all time” — which will pay out $20 million to the first privately funded mission to land on the moon.

Team Phoenicia, as part of its agreement with Penn State, will “contract with a launch vehicle provider” and arrange for the launch of the Lunar Lion rover into orbit in 2015. After it reaches orbit, the Lunar Lion will then be pushed in a “lunar-intercept trajectory” (read: toward the moon), as illustrated below: 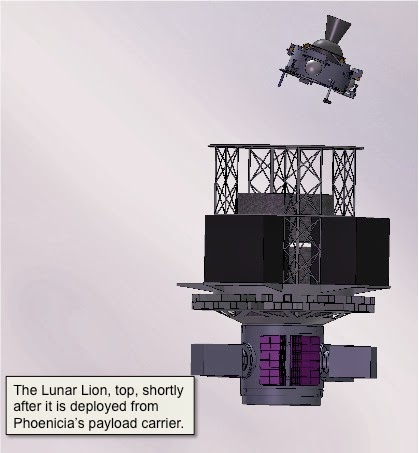 Phoenicia is an “orbital payload manifesting company,” which is basically a carpooling service for rockets. Think of it this way — it’s expensive to send a rocket into space, but if the cost is shared among several passengers (payloads), launching a payload like the Lunar Lion into orbit becomes more economical for all parties involved.

In other words, Phoenicia’s role is to aggregate payloads to be sent into space from multiple customers, including the Lunar Lion. The Lunar Lion, in turn, will not have to pay the full cost of launching a rocket into orbit. This was a cost that the university-led moon mission had planned on incurring in full, according to Lunar Lion Team Lead Michael Paul.

“We initially used the listed cost of an entire launch vehicle in our fundraising targets and mission budget projections,” said Paul in a press release. “Now we only have to target a fraction of that cost for launch and can apply our energy and funding to other areas of the mission.”

By booking its trip to space with Phoenicia, the Lunar Lion has added to a long list accomplishments over the life of the project, which include but are not limited to the following:

The last item on the Lunar Lion’s checklist, of course, will be the actual moon landing and the placing of a miniature Lion Shrine on the lunar soil. While they’re at it, I wouldn’t mind a “Penn State Lives Here” sign on the moon, either.

For more information on the Lunar Lion, you can read our Jan. 2013 interview with Team Lead Michael Paul.

Roll your eyes all you want. This is a “We Are” moment if I’ve ever seen one.

The town hall will be livestreamed at 8 p.m. on Tuesday, July 14.