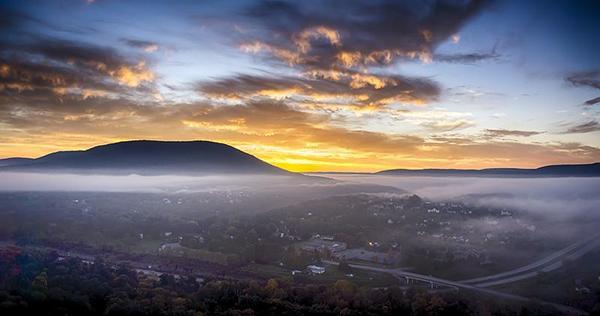 This post was submitted by a member of the community. You can have your content published on Onward State by submitting it here.

In “The Legends of the Nittany Valley,” folklorist Henry Shoemaker records some of the American Indian and settler stories that provide much of the cultural and historical basis for Penn State mythology, including Mount Nittany as our sacred symbol and pristine retreat, the love story of Princess Nittany and Lion’s Paw, and even the reclusive Nittany Lion.

Yet stories alone have no independent life to speak of; their significance grows from the affection, tenderness, and patience of the reader, from the moments spent in solitude or near friends with the words of a long-dead peer over a coffee at Saints or W.C. Clarke’s. Herodotus or Dante would be nothing without the gift of time and attention paid in gratitude by the living reader. It’s through that gift that we reverence something culturally significant, and make something from the past a part of our present time.

This is what tradition is, if distilled — the continuing act of encountering the past, helping it come alive again in some way, and then in due course becoming a part of the past ourselves as we look to the future. This beautiful notion is encapsulated in an even more beautiful practical, example: The singing of Robert Burns’s 1788 “Auld Lang Syne” every New Year’s Eve. It’s a literal and lyrical Scottish injunction to remember our friendships and honor days gone by on the eve of a new time.

This helps explain why Mount Nittany, by all accounts an ordinary Pennsylvania mountain, is nonetheless sacred for Penn Staters and the people of the valley. As with the stories of the past, we’ve infused the Mountain with a distinctive meaning. Penn State Professor Simon Bronner writes that we “inspirit the land” of Mount Nittany and places like it. We do this in a thousand distinct ways, through hikes alone to learning and sharing the same stories to nights spent with friends around a small fire.

The Mount Nittany Conservancy is what makes our experience of the Mountain possible—specifically what makes our experience of it as a natural space, protected from development, a perpetual part of the Nittany Valley experience. Even if you’ve never heard of Henry Shoemaker, and aren’t inclined to pick up his stories, the Mount Nittany Conservancy has made it possible to encounter a bit of the legend, mythology, and history of the Mountain through two new podcasts. The first, “Mount Nittany in Myth and Legend,” is a digestible seven minutes and is concerned with origins:

The second podcast, “The Story of Mount Nittany,” is a meditative 40-minute encounter with the reason the origin stories matter. In it, we hear from the people who conserve the Mountain for all to enjoy, from personalities as varied as Nittany Lion’s letterman Bob Andronici and student-volunteers combating erosion, to trailblazer Tom Smyth recounting decades of history (at 13:30), to Vince Verbeke’s “wayfinding stations” (18:21), to Penn State Arboretum director Kim Steiner’s insight on Mountain forestry (21:25), to Mount Nittany Conservancy founder Ben Novak’s experience of the “ordinary” Mountain (24:04), vision for land acquisition (28:08), and creation of square-inch deeds (31:55), to Bob Frick’s experience with less-preserved mountains (25:30), to Ben Bronstein’s historical markers (26:15), to Sue Paterno’s reflection on the Mountain (32:37) and Coach Joe Paterno’s affection for Mount Nittany as one on the Mount Nittany Conservancy’s inaugural board. Bob Frick, a Mount Nittany Conservancy board member, served as the executive producer of these podcasts, which were co-produced with WPSU’s Katie O’Toole and Patty Satalia.

Nearly a century before many of us were born, Henry Shoemaker declared: “There is no spot of ground a hundred feet square in the Pennsylvania mountains that has not its legend. Some are old, as ancient as the old, old forests. Others are of recent making or in formation now. Each is different, each is full of its own local color.”

Mount Nittany is one of those Pennsylvania mountains, and the Nittany Valley remains a place where legends continue to take shape. Thanks to Henry Shoemaker’s stories, and the Mount Nittany Conservancy’s new podcasts, you can get a better sense for why the Mountain matters and why hiking it is such a special experience.

“Hiking Mount Nittany” is one of those things that finds its way onto the Penn State bucket lists of most students, and it’s something many make a ritual pleasure. A single hike often serves as an occasion for encounter with “local color” of the Mountain and the valley, a color which has a radiance that outlasts every autumn.

Tom Shakely is author of Conserving Mount Nittany: A Dynamic Environmentalism, and a member of The Nittany Valley Society’s Board of Directors.

On The All-American Rathskeller

“All things considered, I’m cautiously optimistic that the Herlocher’s local purchase of the Foster Building will achieve some degree of good conservation, although it’s a tragedy for the distinctiveness of State College to lose the Skeller in the process.”

How Penn Staters Can Encounter Their Heritage