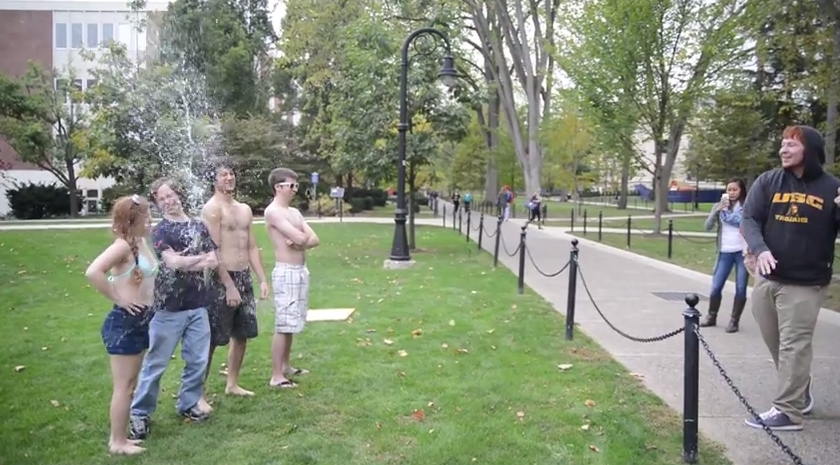 On a cold, windy October day, one wouldn’t exactly expect to see a group of shirtless atheist and agnostic students by the Willard Building, begging you to pelt them with water balloons. But in order to raise money for the Penn State Atheist and Agnostic Association, this is exactly what a brave, and rather cold, group from the organization decided to do.

As part of the Stone an Atheist fundraiser, participants “stoned” group members with water balloons for $0.75 to $1. The group’s members hope to use that money to pay for high-profile atheists to speak at events for the group, like Dave Silverman, the president of the American Atheists. Furthermore, the group just wanted to let people know it exists.

“More often than not, people just come up and talk to us and never buy balloons,” said President Max Hummel.

There’s a more serious aspect to the fundraiser, too. The group wanted to give attention to the fact that in many countries, stoning atheists is still an accepted punishment for the belief.

So next time you see a bunch of shirtless students begging for you to pummel them with balloons in the cold, be assured they’re not crazy.

Former Visual Editor, best known for recording Sue Paterno dancing to “Shake it Off”. From Greencastle PA, a town with four traffic lights and a graduating class of 110, Jack’s main life goal is to make sure he never has to return to Greencastle again. A senior in Journalism, you can follow him on twitter (@jackslens), but I wouldn’t. If you think your event deserves video coverage, know someone or something that does, or maybe just want to chat, email him at [email protected] He loves that, and you seem cool.

Penn State already requires students living in on-campus housing to be immunized from mumps and measles, among other infectious diseases.

Behind every Nittany Lion is a Penn State mom, and we wouldn’t be here without them. Happy Mother’s Day!