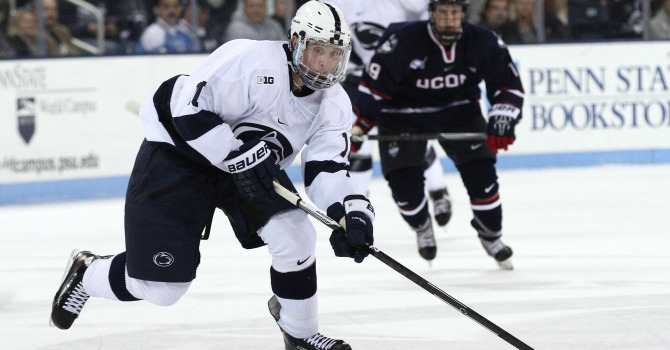 The men’s hockey team fired on all cylinders Sunday afternoon, as the Nittany Lions cruised to a 7-1 victory over Holy Cross, sweeping the weekend series against the Crusaders.

Scott Conway, one of three freshmen seeing significant ice time this season for the Lions, scored two goals and added two assists. His first goal, the first of his collegiate career, came after a beautiful deke around a defensemen near the blue line allowed Conway to skate in and beat the Crusaders’ netminder to give Penn State a commanding 5-1 lead. He added a second goal on the power play with two minutes left in the third period to give the Lions their seventh and final tally.

“The first one’s always the hardest one,” Conway said after the game. “I’ve just been trying to put pucks to the net as much as I could during these last five games, and it finally went in.”

Along with his newly found knack for scoring, Conway has found a role as Penn State’s “agitator,” the kind of player that bothers the opposing team and forces penalties. Conway could be found getting in the face of a few Holy Cross players after the whistle, and his physical play allowed Penn State to win puck battles that generated quality scoring chances.

“I try to get under the other team’s skin as much as I can, get them pissed off,” he said. “Hopefully they get something called.”

“It’s who he is,” added coach Guy Gadowsky. “I don’t think he sets out to really play the ‘aggravator’ type of game, but it seems like he does that very well.”

Penn State dominated the game right from the start, keeping the majority of play in the Crusaders’ zone. The Lions made a statement with their physical play, highlighted by defenseman Nate Jensen’s big hit that leveled Holy Cross’ Scott Pooley at center ice with five minutes remaining in the period. After a cross checking penalty on the Crusaders’ Brett McKinnon put Penn State on the powerplay, David Glen nearly scored the game’s first goal on a puck that rolled through the crease, but he couldn’t get off a shot attempt on the half-empty net. The Nittany Lions finished the period outshooting Holy Cross 15-5.

Gadowsky praised the work of goaltender Matthew Skoff, especially during the first period. Although the junior netminder only faced five shots, he turned each one aside to keep the game scoreless.

“It was a tough first period for him because he only faced five shots, but they were actually pretty good ones,” Gadowsky said. “I think that’s hard for a goaltender. It’s easier when you’re into the game and seeing pucks regularly.”

“He looked calm throughout the whole night,” Gadowksy added. “His demeanor has perforated through to the team.”

Skoff would have to be solid early in the second period as the Crusaders’ increased their pace of play and put the pressure on the Lions. The goalie made a key save on a shot attempt in close just thirty seconds into the period to keep the game scoreless. After dominating the first twenty minutes, Holy Cross held a 6-0 shot advantage six minutes into the second period, which included a a Crusaders’ 5-on-3 advantage for 1:35.

After successfully killing off both penalties, Casey Bailey opened up the scoring with just over five minutes to play in the period on one-timer on a pass through the slot from Taylor Holstrom. The assist was Holstrom’s sixth of the season, giving the senior the Big Ten lead. Curtis Loik buried a one-timer on the powerplay just three minutes later to put the Lions up 2-0, assisted by Conway and Erik Autio. The assist was Autio’s first collegiate point.

In the third period, the floodgates opened. Eric Scheid ripped a one-timer from Conway on a 2-on-1 past Holy Cross’ goalie Matthew Ginn less than four minutes into the frame to give Penn State a three-goal advantage. David Glen added his second goal of the season under two minutes later, sneaking the puck under Ginn’s pads for a 4-0 lead.

Holy Cross answered with a goal from Jake Bolton just over two minutes later, a quick wrist shot from the left circle that beat Skoff high blocker side. It was Skoff’s only blemish of the afternoon, finishing with 29 saves.

Penn State answered five minutes later on Conway’s first goal to go up 5-1. Senior and former Icer Jacob Friedman notched his first collegiate goal with 4:13 left to play, burying a shot in deep after cleaning up Ricky DeRosa’s rebound. Conway scored his second goal of the game, this time on the powerplay, with two minutes remaining to give Penn State their seventh and final goal.

The Lions face off against Bentley this upcoming Thursday and Friday at Pegula Arena before kicking off a tough four-game road trip against No. 8 UMass Lowell and No. 14 Michigan. Coach Gadowsky said the addition of the three freshman coupled with the experience from last year’s season have paid huge dividends thus far, and hopes to carry the momentum of the weekend sweep into the rest of the year.

“We could never do this if it wasn’t what we went through last year,” Gadowsky said, noting that the team faced the second-toughest schedule in the nation last season. “We improved so much from October to March. So I think when you add a (Scott) Conway, and an (Erik) Autio, and a Jimmy (James Robinson), your skill improves.”

Penn State economics professor Jadrian Wooten knows a thing or two about ~the economy~. Now, he’s connecting his passion for econ with *literally* one of his favorite shows.

Staff Picks: Best Places To Get A Haircut In State College