Zwinak and Keiser Out For Season With Career-Ending Injuries 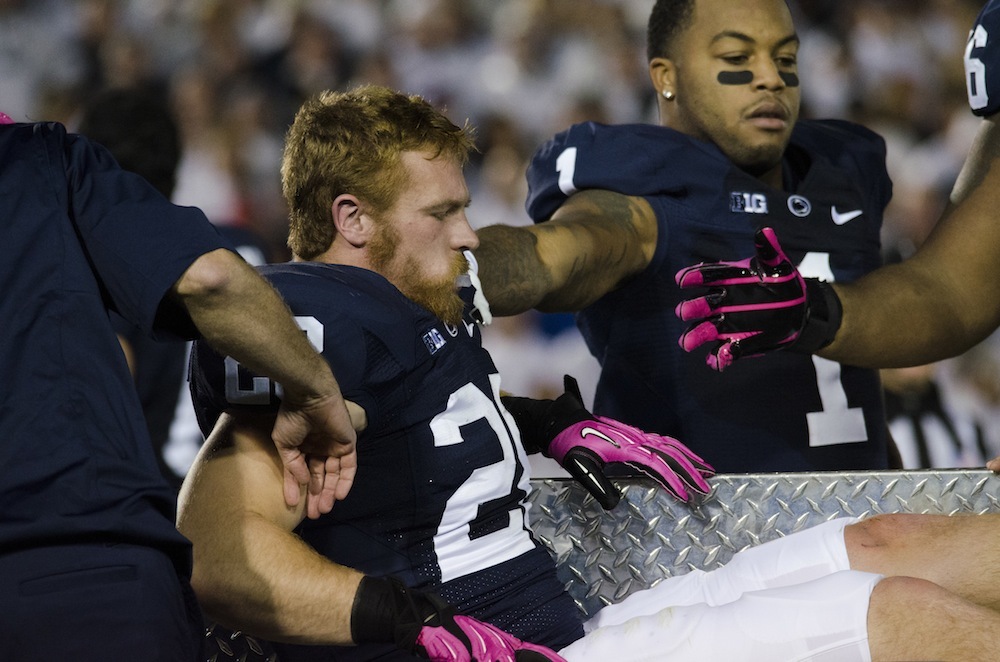 Penn State running back Zach Zwinak and safety Ryan Keiser, both seniors, will miss the rest of the season according to an announcement by head coach James Franklin on Monday.

Zwinak suffered an apparent leg injury during the opening kickoff of Saturday’s primetime matchup with Ohio State and was carted off the field. It appeared to be his lower left leg as medical personnel removed his cleat and focused on his ankle area.

Zwinak did not return to the game. The team did not release any information on the specifics of the injury, but it’s a career-ender for Zwinak who’s in his last year of college eligibility. The injury means an expanded role for both Bill Belton and Akeel Lynch over the remainder of the season.

Zwinak finishes his senior season with 40 carries for 112 yards and three touchdowns. Through four years of play at Penn State, the workhorse running back racked up 2,108 yards on 456 carries with 21 rushing touchdowns.

Keiser, a co-captain on the team, sustained an injury at practice on Thursday. He was the team’s starter at free safety through the first six games of the season and recorded 25 tackles, third-most on the squad.

True freshman safety Marcus Allen is next in line for action at free safety and will be the new starter, according to Derek Levarse. Allen saw plenty of play on Saturday against the Buckeyes and recorded 11 tackles and a pair of pass breakups in the secondary as Keiser’s replacement.

True freshman Marcus Allen is PSU’s new starting safety. He had 11 tackles and broke up two deep passes against the Buckeyes.

There will likely be more information available on the extent of the injuries at Franklin’s press conference on Tuesday afternoon. We wish the best to both Zwinak and Keiser and hope for a speedy recovery.

Share via
Zwinak and Keiser Out For Season With Career-Ending Injuries
https://onwardstate.com/2014/10/27/zwinak-and-keiser-out-for-season-with-career-ending-injuries/
Follow @onwardstate
Send this to a friend