Once a Maryland Coordinator, Franklin to Face Former Recruits Saturday 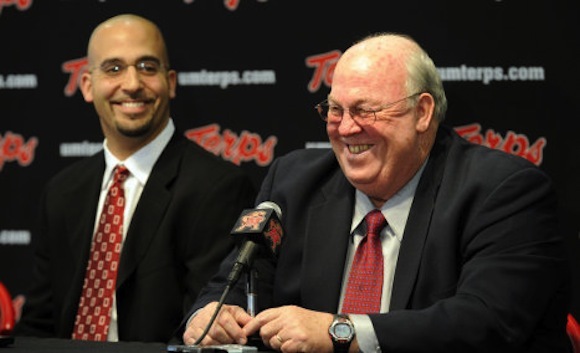 It’s no small secret that James Franklin is a winner on the recruiting trail. On Saturday, he’s hoping that some of his recruits won’t end up beating him.

Penn State (4-3) hosts Maryland (5-3) Saturday at noon, where Franklin served as the assistant head coach and offensive coordinator from 2008-2010. Franklin recruited many starters still on Maryland’s roster. On Saturday, he’ll coach against them for the first time.

“A lot of the fifth year and sixth year seniors I know really well,” Franklin said at his midweek press conference.

Chief among them is senior quarterback C.J. Brown. Brown is the Terrapins’ leading passer (1316 yards, eight touchdowns) and rusher (376 yards, five touchdowns). “I know him really well,” said Franklin. “[He’s an] athletic guy who runs really well and can make plays with his arm as well.”

With Brown under center and Mike Locksley at offensive coordinator (with whom Franklin also worked), Maryland runs a spread no-huddle offense that averages 31 points per game. “They’re big into the quarterback running game, fast and productive,” said Franklin. “Their skilled players are really good.”

One of those skilled players, Stefon Diggs, a preseason all-Big Ten selection, has racked up 46 receptions for 601 yards and five touchdowns already this year, numbers similar to those of DaeSean Hamilton. Last week against Ohio State, facing a similarly dual-threat quarterback in J.T. Barrett, the Nittany Lions were torched as they allowed the freshman quarterback to rush for 75 yards and two touchdowns, both of which came in overtime.

Franklin suggested that Maryland and Penn State line up evenly. He noted that the Terrapins have an advantage in turnover margin, total offense, and scoring offense, while his Nittany Lions have the edge in penalties per game, total defense, and scoring defense. “It’s interesting how that breaks down,” he said.

One major difference, however, is youth. Penn State’s the second youngest team in the country. Maryland, meanwhile, returns 17 of 22 starters, one of the highest rates in the conference. “They’re an experienced group,” Franklin said.

The first-year coach also pointed to Maryland’s strong special teams, which is leading the Big Ten in punt return average. Sophomore defensive back William Likely averages 16.3 yards a return, with one touchdown, seventh-best in the country. He has also returned two of his four interceptions for touchdowns. “He’s a player,” said Franklin.

Franklin will have to best his former recruits to get Penn State off its first three game losing streak since 2004.

“We’re excited to be back at home,” he said.

Share via
Once a Maryland Coordinator, Franklin to Face Former Recruits Saturday
https://onwardstate.com/2014/10/29/once-a-maryland-coordinator-franklin-to-face-former-recruits-saturday/
Follow @onwardstate
Send this to a friend