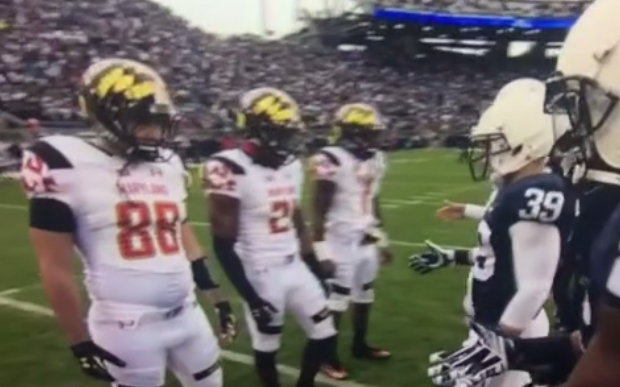 Looks like Maryland let all that rivalry talk get to its head.

Before today’s 20-19 loss, three of Maryland’s captains refused to shake hands with Penn State’s at the coin toss, instead choosing to stand there like idiots in a baffling show of poor sportsmanship that resulted in a 15-yard unsportsmanlike conduct penalty.

The players, Stefon Diggs, Sean Davis and P.J. Gallo, are Maryland captains, which is a real head-scratcher. The handshake snub came after a pregame scuffle that saw no punches but lots of pushing and shoving. After the game, James Franklin was as taken aback by the juvenile act as any rational fan.

Players weren’t happy about it either:

Mike Hull on the no-handshakes before the game: “Yeah, it was disrespectful. What are you gonna do. They won.” — Derek Levarse (@TLdlevarse) November 1, 2014

According to Edsall, that handshake denial was not a directive from him, and he apologized in his post-game press conference.

Randy Edsall on pre-game no handshakes: “That’s not way we want our kids to be. I want to apologize. That was not choreographed” — Brett McMurphy (@McMurphyESPN) November 1, 2014

But prior to the apology, he had already added more fuel to the fire.

Maryland might have won the game, but it made itself the laughing stock of the country in the process. Obviously, Maryland is a long, long way from any sort of rivalry with us, especially if it thinks this is how to start one. Maybe we can talk rivalries if it pulls off a 33-game winning streak against us.

Share via
Maryland Refuses Handshakes With Penn State After Pregame Scuffle
https://onwardstate.com/2014/11/01/maryland-refuses-handshakes-with-penn-state-after-pregame-scuffle/
Follow @onwardstate
Send this to a friend