Maryland Still Trying For a Rivalry With Penn State 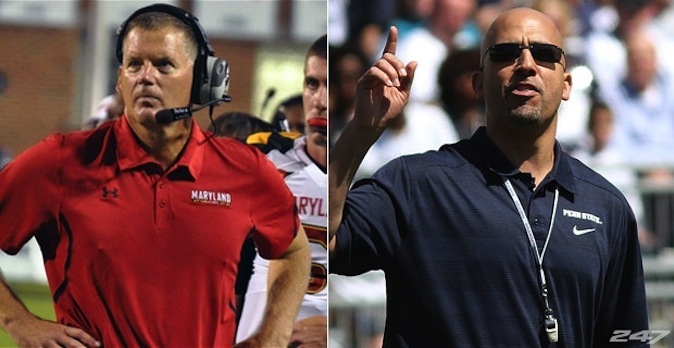 If Maryland coach Randy Edsall gets his way, Penn State and Maryland will soon call one another rivals. Obviously, Maryland has a lot of work to do for that to become a reality.

Edsall’s apparent distaste for Penn State started in the summer, when he said “talk is cheap” in regard to James Franklin’s recruiting. After that, the takes from Penn Staters were fast, furious, and unanimous — Maryland is no rival of ours.

But this week, Edsall re-established his hope for a rivalry for the pair of eastern B1G schools.

“I think I’ve been on record, you have to win games and that’s one thing that we haven’t done here at the University of Maryland,” Edsall said, according to Yahoo! Sports. “Most of our guys weren’t even born yet the last time [Penn State and Maryland played]. Again, it’s just one of those things that we will get the chance to play them now on a yearly basis, and what we have to do, is continue to get better. If you are ever going to make a series a rival, there has to be wins on our side to be able to make that happen.”

Indeed, Penn State holds a monstrous 35-1-1 all-time series lead, with Maryland’s last and only victory coming in 1961, even before Joe Paterno’s time at the helm. On the other hand, Maryland isn’t exactly a Rutgers, for which we will never have enough respect to call a rival. For one, the Terrapins are historically much better than Rutgers (Maryland has 25 bowl appearances to Rutgers’ eight, and 11 conference championships to one). Also, there’s a fair chance that Maryland wins on our turf tomorrow — most sportsbooks have Penn State winning by only a field goal. If a team comes into Beaver Stadium and wins during its first year in the Big Ten, it deserves some respect. To add some intrigue, Franklin was a coach at Maryland for some time, and now he’s hoping his former recruits don’t take him down.

But like any good rivalry, this one will likely never be realized unless it gets heated on the recruiting trail. In that regard, Franklin has already given Terps fans ample reason to hate his guts. Penn State has commitments from two of Maryland state’s top five recruits in Adam McLean and Kamonte Carter; expanded to the state’s top 20, Penn State also has a commit from Jonathan Holland, while Maryland has merely one top 20 commit in its own state.

“Penn State has always recruited down here and Penn State has pretty much always gotten who they wanted to get down here,” Edsall told Yahoo! “It goes back to beating them on the field to change those things, those are the things that you have to do. We’re in an area where it’s a bordering state and you have the population that we have here there is going to be a lot of people that are going to come in here and recruit. It’s just one of those things and what you have to do is go out and play to the best of your ability and win. That way you can probably keep more of those guys here at home.”

While Rutgers has absolutely no idea what a Big Ten rivalry should be like, Maryland is approaching this with more respect and realism. And despite the comments that will likely come on this article decrying a rivalry with Maryland as an impossibility, Penn State is in a rut right now. If Maryland is going to get anything going, the time is now.

“Going to State College,” Edsall said to the Washington Post. “It hasn’t been a place that has been very friendly to the University of Maryland over the years.”

James Franklin, meanwhile, isn’t convinced that a rivalry is close.

Share via
Maryland Still Trying For a Rivalry With Penn State
https://onwardstate.com/2014/10/31/maryland-still-trying-for-a-rivalry-with-penn-state/
Follow @onwardstate
Send this to a friend