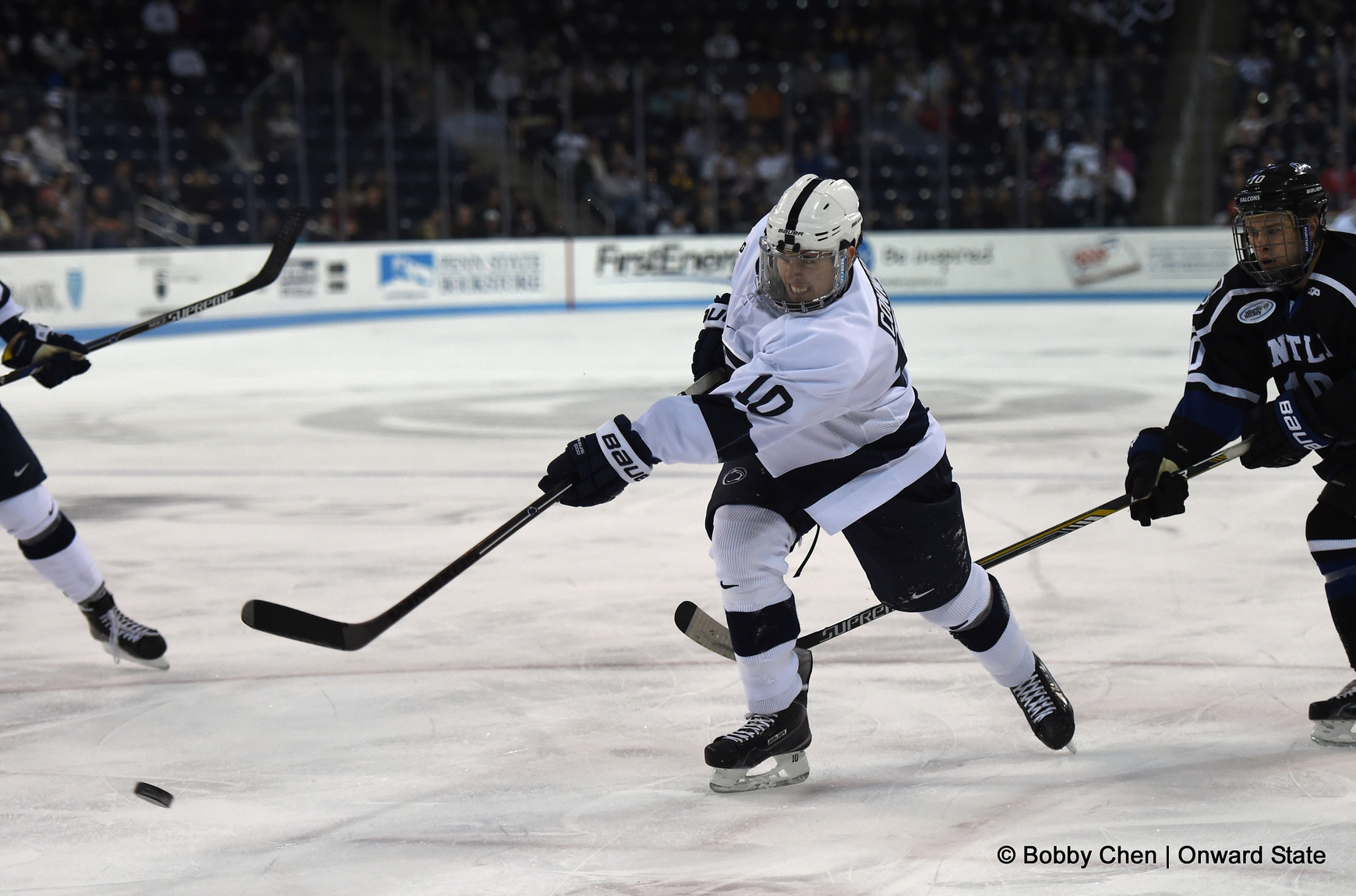 Taylor Holstrom, second in the country with 12 points through seven games, tied the game with 2:59 remaining in the final period. With the crowd buzzing, Eric Scheid picked up the puck in the defensive zone after the faceoff, zoomed down the ice, and threw a shot on net with traffic in front that found twine just 16 seconds later, blowing the roof off of Pegula Ice Arena.

“Jimmy [James Robinson] had a great drive to the middle of the net, took the D with him, and just traffic in front so I figured might as well throw it at the net, and hopefully something good happens,” Scheid said. “And I had it go in.”

While the third period ended in elation, the first two periods were a frustrating affair. After surrendering two power play goals in the opening period, Penn State found themselves having to claw their way out of a frightening hole.

“We certainly didn’t do our best at the start, knowing full well that their powerplay is sixth in the nation,” said coach Guy Gadowsky. “Our game plan was not to give them any power play opportunities, and we gave them two, and it’s 2-0. Things just weren’t clicking.”

But the Nittany Lions (5-1-2) pulled within one goal of the lead after freshman Scott Conway’s goal with 10:46 remaining in the second period, his third goal in the last three games.

In the third period, Penn State sent a barrage of shots to the net, but couldn’t get anything past Bentley’s goalie Brent Dougherty. The Nittany Lions outshot the Falcons (3-4-0) by a factor of three in the final period, but didn’t get on the scoreboard until Holstrom’s goal with just under three minutes to play.

The win was the second come-from-behind victory in as many nights after Penn State entered the series having never bested a team while trailing. In the last two years at the Division 1 level, Penn State has seen their fair share of late leads evaporate into thin air, but it appears this team is poised to be on the winning side of those close games.

“We’ve asked the team to identify if we had some mental toughness issues when we’re up in the third,” said Gadowsky. “And this weekend, we had two opportunities going in down in the third, and I think they came through with flying colors.”

“We’ve been a part of a lot games where we’ve given up leads in the third,” added Scheid, “and it’s been really haunting us lately, so to be able to come back both nights and get a win, it feels pretty good.”

Share via
Two Goals In 16 Seconds Give Penn State Dramatic Win Over Bentley
https://onwardstate.com/2014/11/01/two-goals-in-16-seconds-give-penn-state-dramatic-win-over-bentley/
Follow @onwardstate
Send this to a friend