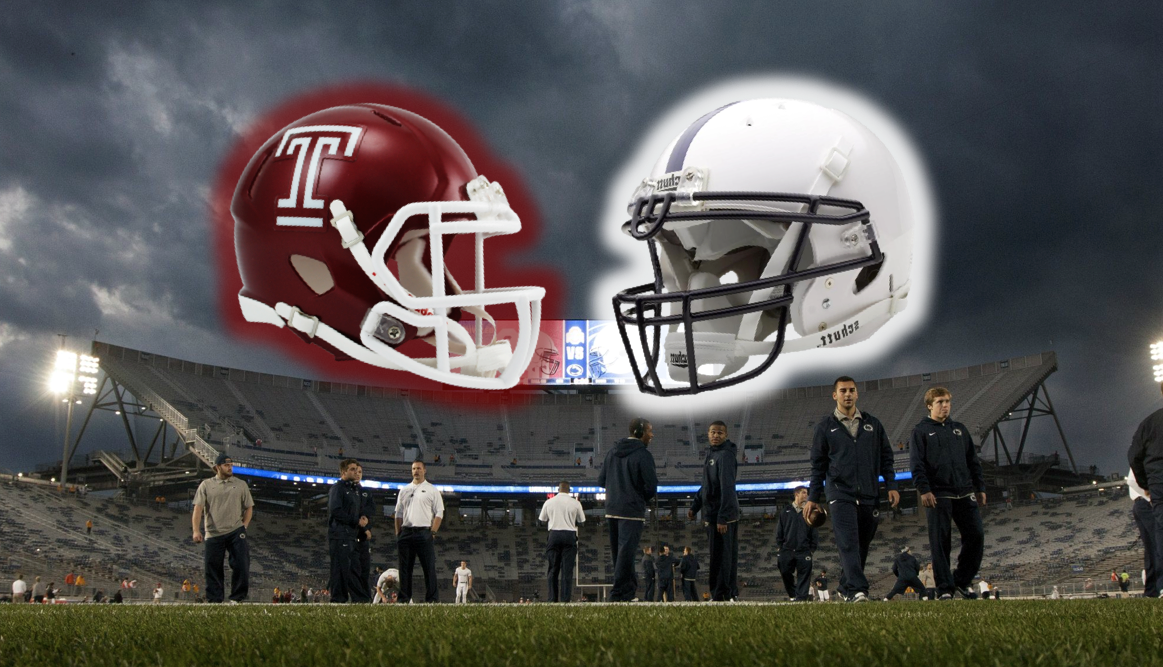 Most of us predicted a struggle, but the Onward State staff is cautiously optimistic that Penn State will become bowl-eligible for the first time since 2011 on Saturday.

Here’s what we think about Saturday’s noon matchup with Temple:

Arguably, each of the last five games for Penn State has gotten more and more ugly. We might see the culmination of this trend on Saturday. The Nittany Lions have developed an apparent allergy to scoring and against Temple’s tenth-ranked scoring defense, it may be a struggle.

Temple can’t really score against a formidable defense either, so expect another low scoring game that will be decided by Sam Ficken’s dependable leg. Yes, the Owls’ P.J. Walker is a formidable dual-threat quarterback. But Penn Staters shouldn’t worry; the Lions have faced three running quarterbacks in the past four games and, especially last week in Bloomington, have largely shut them down.

It will be a cold day in an empty Beaver Stadium due to yet another noon kickoff. But following Saturday, Penn State should be eligible to go bowling for the first time since 2011.

Watching the Nittany Lions has been nothing short of painful and disappointing. Although it doesn’t feel like it, this game has some big time postseason implications.

I look nothing into Temple’s upset of ECU, because the box score reveals a much different story. Temple’s quarterback has some talent, but the Owls offense will be no match for Penn State’s top-ranked defense. There really isn’t too much to say about this contest, because at the end of the day, it’s Temple.

The team should have its wits about it right now, given the fact that the Nittany Lions are a win away from becoming bowl eligible. Simply put, the offense does not need to be special, it just needs to be effective. Penn State cannot lose this game, and I don’t foresee the Owls pulling off another upset.

No, it won’t be as bad as Penn State vs. Iowa in 2004. That game is on another level when it comes to football mediocrity. However, this game has all the makings of an epic sequel. Or whatever the opposite of epic is. Lackluster?

Both teams boast formidable defenses that will be sure to keep the opposing offense at bay. The Owls enter Saturday’s contest with the tenth-best scoring defense, while Penn State ranks sixth nationally in scoring defense, third in total defense, and first in rushing defense. Try as they might, the Owls are going to have a hard time moving the ball. P.J. Walker can be an effective dual-threat quarterback, but he’s only rushed for 183 yards on 73 carries (2.5 avg) this season. He’s more effective as a goal-line threat, with three rushing touchdowns, but Penn State’s only given up 10 rushing touchdowns in 27 tries this year in the red zone. Walker has thrown for more than 1,600 yards and 11 touchdowns, but also 10 interceptions. For a quarterback who’s prone to making mistakes, facing Penn State’s world-destroying defense is less than ideal.

For Penn State, the offense remains woefully ineffective. Hackenberg’s 454-yard performance against UCF in Dublin looks more like an anomaly than a sign of things to come. The offensive line, for all its struggles, will receive a boost if it has a healthy Donovan Smith and a limited Miles Dieffenbach in the lineup, but it’s uncertain if the two will play. Belton’s 92-yard run and overall performance against Indiana is encouraging, but the senior needs to prove it wasn’t a fluke.

If this team is going to win and become bowl eligible for the first time since 2011, it will be because of Sam Ficken and a top-tier defense. In the meantime, let’s just pray the offense doesn’t screw everything up.

In a matchup that can be best described as “definitely having two college football teams,” one team has to be awarded a victory, and I think that will be Penn State.

The Nittany Lions surrendered no offensive points against Indiana last week, and should exhibit a similar effort against a comparable Owls offense. Any anomalous play can pop up of course, and the Owls could score on one big play or capitalize on Penn State’s inevitable turnover. If they don’t, however, I don’t see Mike Hull and Co. letting them get any momentum.

The matchup begins to look scary when you consider Temple’s tenth-ranked scoring defense, and if the Penn State offense struggles early, it could have a long day. Still, the Nittany Lions have too many playmakers to allow itself to be completely left off of the scoreboard.

In the last home game of the season not over Thanksgiving break, the crowd is going to be fired up for this one. The atmosphere should persuade Temple to play like the team that lost by 20 to UCF, not the team that fluked its way past No. 23 ECU.

No matter what, one of these teams has to win, and one will become bowl eligible by the end of the weekend. Let’s hope Penn State will be the one to pull it off.

This game really shouldn’t be televised. I actually feel bad that my dad is coming up for this.

Temple’s offense has put up some decent numbers this year (27.6 points per game), but that has come against a mostly weak schedule. The team has a quality win against No. 23 East Carolina that, quite honestly, is probably a better win than any of Penn State’s this year, but the Owls are still 5-4 and sixth in the weak American Athletic Conference.

Penn State will struggle to move the ball (again) and the defense will play well (again) and keep Temple mostly off the scoreboard. I think the defense will be able to give the offense enough of an advantage in field position that even the few chunks of yards it picks up will be enough to get a field goal out of a few of the drives. I think Penn State will grab bowl eligibility in the least exciting way possible on Saturday. It’s a shame that this incredible defense is being wasted in a year with an offense this poor, but that’s the reality of things for Penn State this season.

This was the score of the game in 2011. Temple played host, so my mom and I drove 20 minutes over the bridge to Philadelphia to watch what has so far been my only Penn State road game. The lower level was half-full with mostly Temple fans, and the upper level was about three quarters full with almost entirely Penn State fans.

This is also the single worst sports event I have ever been to. The game was absolutely atrocious. Sloppy play on both sides made it nearly unwatchable, and it was probably the only time I’ve ever truly thought Penn State might actually lose to Temple.

This game has all the makings of a similar suck-fest, especially given the Nittany Lions’ recent play. The fact that they’re favored by double digits tells me that Temple must really suck, and therefore, this game will go down in the history books of horribleness.

Penn State is ass. Temple is ass. This game is going to be ugly as all hell, but I still think we pull out the win at home. Temple won’t move the ball for anything on our defense, and I think we can muster enough for DaeSean to put up a solid game. Coupled with a few Ficken kicks, PSU pulls off a 18-3 win, touchdown, safety, three field goals. It’s no 49-6, but a win is a win and Penn State gets bowl eligibility against an in-state “rival.”

Now a month into the semester, our staffers have some strong feelings about Penn State’s most effective course delivery method.

Staff Picks: Dining Hall Food We Miss The Most