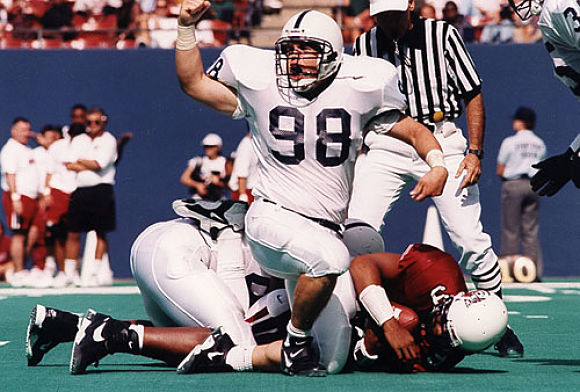 Temple head coach Matt Rhule has made a lot of memories in Beaver Stadium.

After graduating from State College High, Rhule played football at Penn State from 1994-1997. He has fond memories of his playing days — especially the magical 1994 season, in which the Nittany Lions finished undefeated and No. 2 in the country.

“I remember the first time I got into a game,” Rhule said on a teleconference this week. “Just the sheer joy of, I had worked hard, and finally having the chance to get into the football game was a special, special moment for me on a personal level.”

“I’ll probably never forget when we beat Ohio State [63-14]. We knew we were going to the Rose Bowl. I really wasn’t a factor, I wasn’t really playing, but I just never forget that game, that energy in there, it was a special day.”

Those may be his most vivid memories now, but Rhule is sure to add to his collection when he leads his Owls into Beaver Stadium for the first time as a head coach.

“It’s exciting, you know?” said Rhule. “I spent a lot of my life there, spent a lot of my time there. There are great people there that I’m excited to see. So, from a personal standpoint, those things are nice for me.”

After graduating from Penn State, Rhule became the linebackers coach at Albright College. After one season in that position, he bounced around as a grad assistant at Buffalo and UCLA. He landed his first Division-1 position coaching job at Western Carolina in 2002 and, four years later, Temple offered him a job as the defensive line coach for another Nittany Lion-turned-Owl, head coach Al Golden.

But when Temple came calling again after the season and offered him the head coaching position, he couldn’t pass up the opportunity to return to his home state.

“I want to thank [Temple athletic director] Bill Bradshaw for giving me this opportunity,” said Rhule during his introductory press conference in 2013. “He turned me down two years ago, and he was right two years ago. I wasn’t ready then, but I’m ready now.”

Rhule became ready to become a head coach by learning under some of the game’s best coaches, both old and young: He coached under Golden and the Giants’ head coach Tom Coughlin and played for Joe Paterno, who will not join Rhule for the first time in the coach’s 39 years of football in Beaver Stadium.

“Any time you get an opportunity to go out there [and coach] like I will this week, you’re going to miss having [Joe Paterno] across the field,” he said.

Still, Rhule is trying to build a program that mirrors Paterno’s, but faces a much taller task, as Temple has a reputation of mediocrity. The program has only made it to four bowl games in its history, and it has an all-time .437 winning percentage.

Rhule is looking to change that reputation, and he knows the opportunity that his team faces on Saturday. A signature win against his Alma Mater in Happy Valley would provide huge momentum on- and off-the-field, and at 5-4, the Owls stand just one win away from a bowl berth that has proved to be elusive in the program’s history.

“I’d like to get to six wins for these kids that we have here,” Rhule said. “They’re great kids, they’ve worked really hard, they’ve done everything we’ve asked… I’d really like to be bowl-eligible and give these kids the opportunity to go do that. It’s be great if we could do it now, I’d prefer to not have to wait another couple weeks.”

“More importantly, though, I think it’s a great opportunity for our kids to go there and play against a really good football team. You come to Temple so you can play in games like this. And one is here.”

But Rhule is realistic. He knows his team faces a tall task: While the Nittany Lions haven’t been the most consistent bunch this season, James Franklin’s team still has talent.

Of the Nittany Lions, Rhule said: “It starts with their defense. Coach Shoop has done a great job, they’ve got a tremendous defensive line… With Zettel, they have a bunch of kids inside that wreak havoc. Austin Johnson is a big kid, they get it done inside. Hull is a tremendous linebacker, you put him with the other kids, like [Brandon] Bell, you create havoc off the edge.”

“Offensively, they have weapons. Belton is a weapon, Lynch is a weapon, Hackenberg is as good of a quarterback as there is, and really, wherever you look, they’re really good at what they do. They have tremendous personnel. So we’ll just have to compete, hang in there, and do the best we can against a very talented team.”

A big opportunity for your team, in your hometown, surrounded by your family at your Alma Mater? That’s a situation that would get even the most mild-mannered coach fired up. But while he will appreciate the situation, Rhule thinks he’ll be able to keep his emotions in check once game time rolls around.

“Hopefully I’m cool, calm and collected!” said Rhule. “Some of my great memories and happiest times of my life were out there. The way I approach it, and by no means was I a great player, but any of the highlights I had there, I had by doing what I was trained to do, what I was told to do, by having fun and playing the game.”

“When I go back there, I’ll ask myself: ‘Why would I do anything different?’ I’m going to go out there, relax, have fun, and coach football.” Share via
Temple\'s Matt Rhule Ready for Return to Beaver Stadium
https://onwardstate.com/2014/11/14/temples-matt-rhule-ready-for-return-to-beaver-stadium/
Follow @onwardstate
Send this to a friend