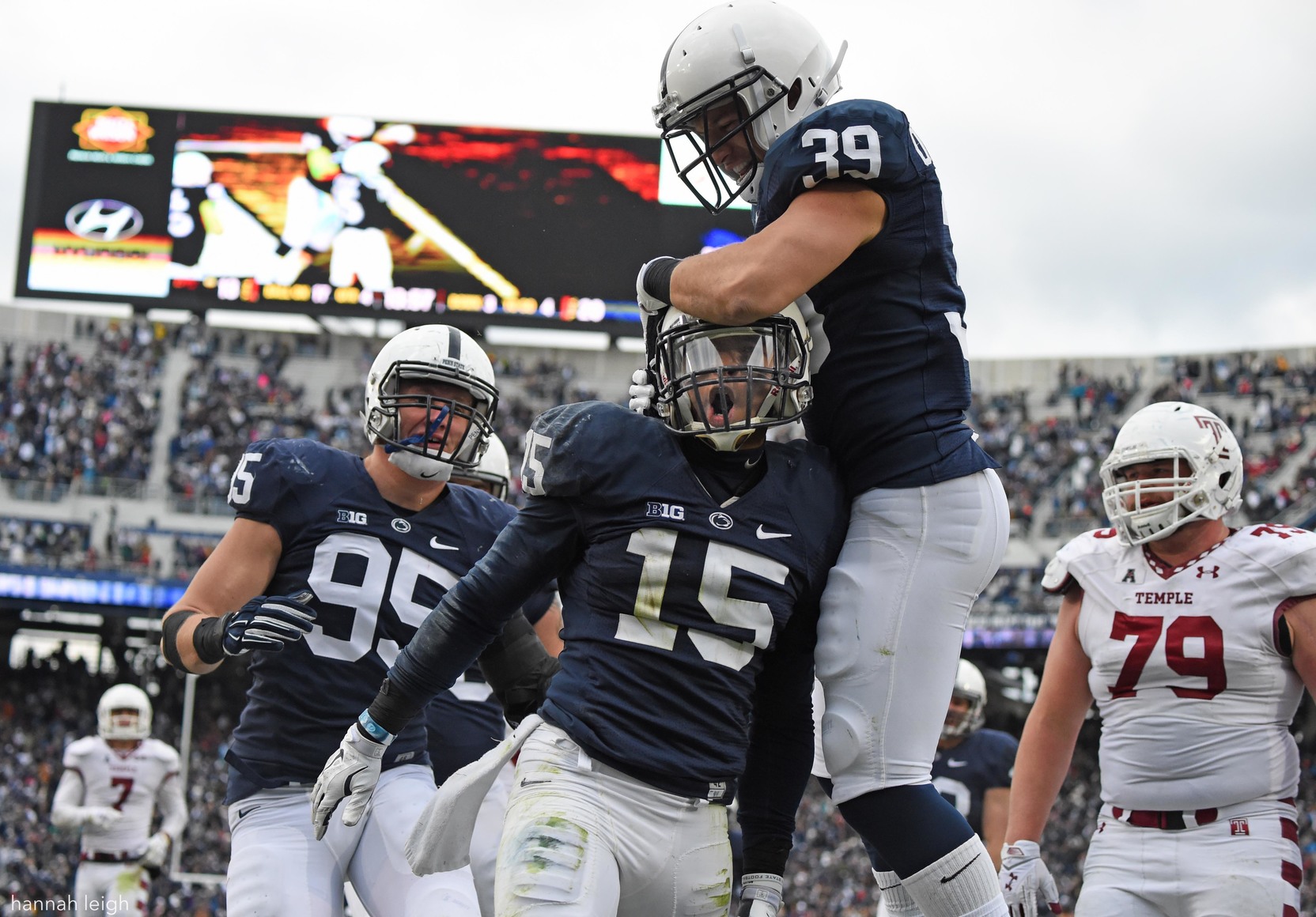 For the first time since 2011, Penn State is going bowling.

Penn State (6-4) won its second straight game Saturday in Beaver Stadium, knocking off the Temple Owls 30-13. The win guarantees Penn State bowl eligibility for the first time since the 2011 season, in which the Nittany Lions suffered a 30-14 loss to the University of Houston in the TicketCity Bowl.

After a non-descript first half that saw a combined 9 points on three field goals, Penn State capitalized on four straight Temple turnovers late in the third and early fourth quarter to nail down the victory.

A pair of rushing touchdowns by Bill Belton and Akeel Lynch on back-to-back drives in the third quarter, followed by a Grant Haley pick-six in the opening minutes of the fourth quarter pushed Penn State’s lead to two touchdowns before Sam Ficken tacked on a 21-yard field goal to end the scoring.

Penn State started fast, driving all the way down to the three-yard line on its first drive, only to be stopped short of the endzone. The team had to settle for a 29-yard Ficken field goal to go up 3-0. This seemed to be a trend in the first half — almost every time the offense put together a decent-looking drive, it shot itself in the foot with a penalty or turnover.

On the next drive, Belton rushed for eight yards on first down, but fumbled on the next play. While it looked like he was down before the ball came out, it was still ruled a fumble by the American Athletic Conference officiating crew — the first of the year by a Penn State running back. Temple capitalized on the lucky turnover, going 33 yards on seven plays. The Owls’ Austin Jones then hit a 30-yard field goal to tie the game.

After the teams traded punts, Temple forced another turnover, as Christian Hackenberg threw a pass behind Mike Gesicki, his intended target, and the Owls’ Tavon Young intercepted it and took it back to the Penn State 40-yard line. After the game, however, James Franklin said the errant pass wasn’t Hackenberg’s fault.

“The one interception early on, the receiver ran the wrong route, so that really wasn’t on [Hackenberg],” said Franklin. “We have to do a better job protecting the ball. One thing we couldn’t do against this team was turn the ball over and we did that early. I thought the fumble early on was a big play in the game that gave them confidence and momentum. But we stuck to our guns… we stuck to the game plan and I was pleased.”

The Penn State defense, however, stood tough after the turnover, as it stopped Temple’s Jahad Thomas for a loss and forced a punt. The defense gave up just 49 yards in the first half.

“[Defensive coordinator Bob Shoop] is really great at what he does,” said Mike Hull. “He put together a great game plan, and put us in a position to make plays.”

Sam Ficken added a field goal as time expired, and Penn State went into the locker room with a 6-3 lead.

It looked as if the offensive slump would continue into the second half, as Hackenberg threw another interception on the first drive of the third quarter. As he was being chased to his right, he threw a floater across the field, off his back foot, to a blanketed Bill Belton. Temple’s Tyler Matakevich picked off the pass and took it back 40 yards into Penn State’s red zone.

But, as has happened so many times this year, the Penn State defense shut the opposing offense down. It held Temple to a 3-and-out, forcing a 25 yard field goal from Jones to tie the game at six.

The hold seemed to inspire the offense, and it finally broke through on the next drive. Bill Belton rushed for 37 yards on the first play of the drive, and Akeel Lynch took it 38 yards to the end zone on the next play to put Penn State up 13-6. The Lions wouldn’t trail in the game after that score.

The defense shouldered the load for the rest of the game, as it forced Temple turnovers on five of the next six Owl drives. Christian Campbell, Adrian Amos, Grant Haley, and Jesse Della Valle all grabbed interceptions, and Austin Johnson recovered a fumble to effectively end any chances of a Temple comeback. The interceptions were the first of Campbell’s and Haley’s careers, and Haley returned his 30 yards for a touchdown.

The offensive line livened up in the second half as well, paving the way for Lynch and Belton to rush for 168 yards and two touchdowns in the half. The team rushed for 254 yards as a whole in the game, the most in a single game this season.

The game was the first that featured both Donovan Smith and Miles Dieffenbach playing together on the line, and the combination of the two helped Penn State tremendously.

“There’s no doubt that having such a physical presence, having two of our more experienced players on the offensive line, was big for us,” said Franklin. “It’s definitely great having those two guys back.”

Player of the Game:

This week, we have a tie for Player of the Game between freshmen Grant Haley and Christian Campbell.

Haley played a great game, notching three tackles, and grabbing his first career interception and taking it back 30 yards for a touchdown. He also returned 3 kicks for 72 yards.

Campbell wasn’t expected to start, but played well in Trevor Williams’ spot, who was out for “non-disciplinary reasons.” He too had three tackles and his first career interception.

After the game, Franklin spoke about his two standout freshmen in the secondary. “I like freshmen, I like freshmen that come in and make plays for us,” said Franklin as he glanced towards the recruits in attendance sitting in the Recruiting Lounge above the stage. “We’re going to play guys that are ready, we’re going to play guys who prepare themselves physically and mentally. I’m really proud of those guys. They’ve been playing all year long and they’ve been playing well.”

Quote of the Game:

Franklin, on becoming bowl eligible: “We love the fact that we were able to find a way to get a W, but it does mean something a little bit more special the fact that we had 49 seniors that stayed around this program when this University and when the community and football program needed them the most. The fact that we are going to be able to send them out the right way, and are able to continue our season and to keep our family together for a month or so after the regular season ends is special, and I’m really happy for those guys.”

Vine of the Game:

This is a new section this week, but it’s necessary. Here’s our favorite Vine of the game:

The story of the first half, in one Vine. And quite frankly, the whole season. https://t.co/MMuaI1TOk7 (Credit: @ericbsion)

Ficken went 3-for-4 on the day, hitting field goals from 29, 50, and 21 yards (a 42-yard attempt was blocked late in the game). With those three field goals, Ficken is now 22-26 on the year, which is tied with Kevin Kelly (2006) and Matt Bahr (1978) for the most in a single season in Penn State history. All four of his misses this year were blocked; he’s perfect when the ball makes it past the line of scrimmage.

Penn State travels to Champaign, Illinois next week to take on Illinois. The Illini are 4-6 (1-5 B1G) after falling to Iowa earlier today. Last time the two teams met, Penn State pulled out a 24-17 victory in overtime.