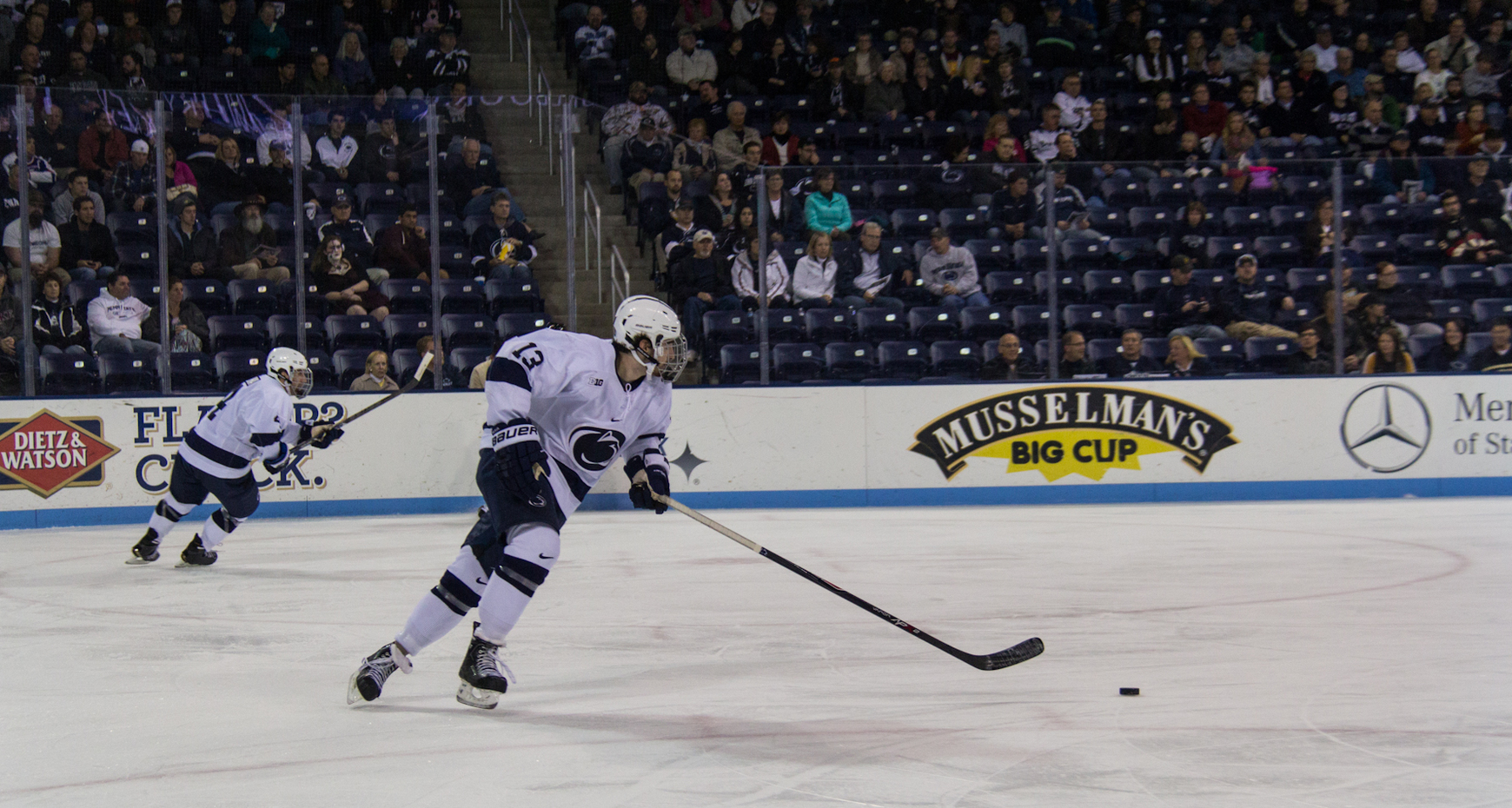 Typically, close games between evenly-matched teams are decided by one moment. And unfortunately for Penn State tonight, that one moment happened to be a questionable five-minute major and game misconduct on defenseman Nate Jensen that allowed Robert Morris to score twice and put the game out of reach. Despite goals from Scott Conway and Casey Bailey, Penn State was never able to fully recover from the five-minute major and ultimately dropped its first game of the Three Rivers Classic 4-2 to the Colonials. Penn State now slips to 9-5-2 on the year.

Both teams were coming off long layovers (Penn State last played 23 days ago while Robert Morris last played 15 days ago), which led to some disjointed play in the first period. Penn State hopped on the power play midway through the period only to have it nullified 36 seconds later on a sloppy neutral zone tripping penalty by Luke Juha. The Nittany Lions were able to kill the short Robert Morris power play and an ensuing Tommy Olczyk high-sticking penalty, but failed to capitalize on an interference penalty later in the period. Eamon McAdam (29 saves, .906 save percentage) and Terry Shaw (35 saves, .946 save percentage) made 9 and 13 saves in the period, respectively.

The second period began much like the first, with neither team able to get much going offensively. Momentum ultimately shifted in favor of the Colonials midway through the second period, however, when Jensen was given a questionable five-minute major and game misconduct for a hit to the head.

“I thought it was a really good game and [the penalty call] was the game,” said coach Guy Gadowsky after the game. “We watched it over and over and we’re going to tell Nate Jensen to make that exact play the exact same way every single time.”

The Nittany Lions withstood the Robert Morris attack for the majority of the five minutes until the Colonials finally broke through with a goal from Brady Ferguson. Ferguson found the puck alone in the slot and wristed one past McAdam to give the Colonials a 1-0 lead. Robert Morris piled on just thirty seconds later with a weak wrister from the left circle that arguably should’ve been saved by McAdam.

“I thought [McAdam] played very strong,” said Gadowsky. “I thought Eamon battled hard and made some great saves. He probably wants the second [goal] back but obviously a little frustration showed when the game took such a drastic turn.”

Scott Conway tacked on a goal for the Nittany Lions just three minutes later when he beat the glove of Shafer right in front of the crease, and Penn State went into the third period trailing 2-1.

Penn State came out of the gate firing on all cylinders in the third, with a Luke Juha slap shot ringing off the crossbar just thirty seconds into the period. Zach Saar, who played in his first game of the season tonight after offseason hip surgery, almost tied the game minutes later when he drove to the net and slid the puck just wide of Shafer. Saar looked like his former self tonight, laying big hits in open ice and wreaking havoc in the crease and behind the net.

“I thought he was physical and I thought he got some good shots on net,” said Gadowsky. “He looked pretty comfortable out there and I thought he had a very strong game. He’s a big, big boy who has a reputation and he brings a bit of a different element to us.”

However, Robert Morris was the one struck first in the third when Daniel Leavens deflected a Chase Golightly shot past McAdam to give the Colonials a commanding 3-1 lead. Casey Bailey cut the Robert Morris lead to one with 1:49 left when he found a loose puck in front of the net and wristed it by Shafer, but it was too little too late for the Nittany Lions. Robert Morris picked up an empty netter a minute later to seal the 4-2 victory.

“[Western Michigan] is a big game for us,” said Gadowsky. “Obviously we’d like to be playing for the Three Rivers Classic Championship, but this is still a very big game for us so we’re going to prepare just the same as we would for any other opponent.”