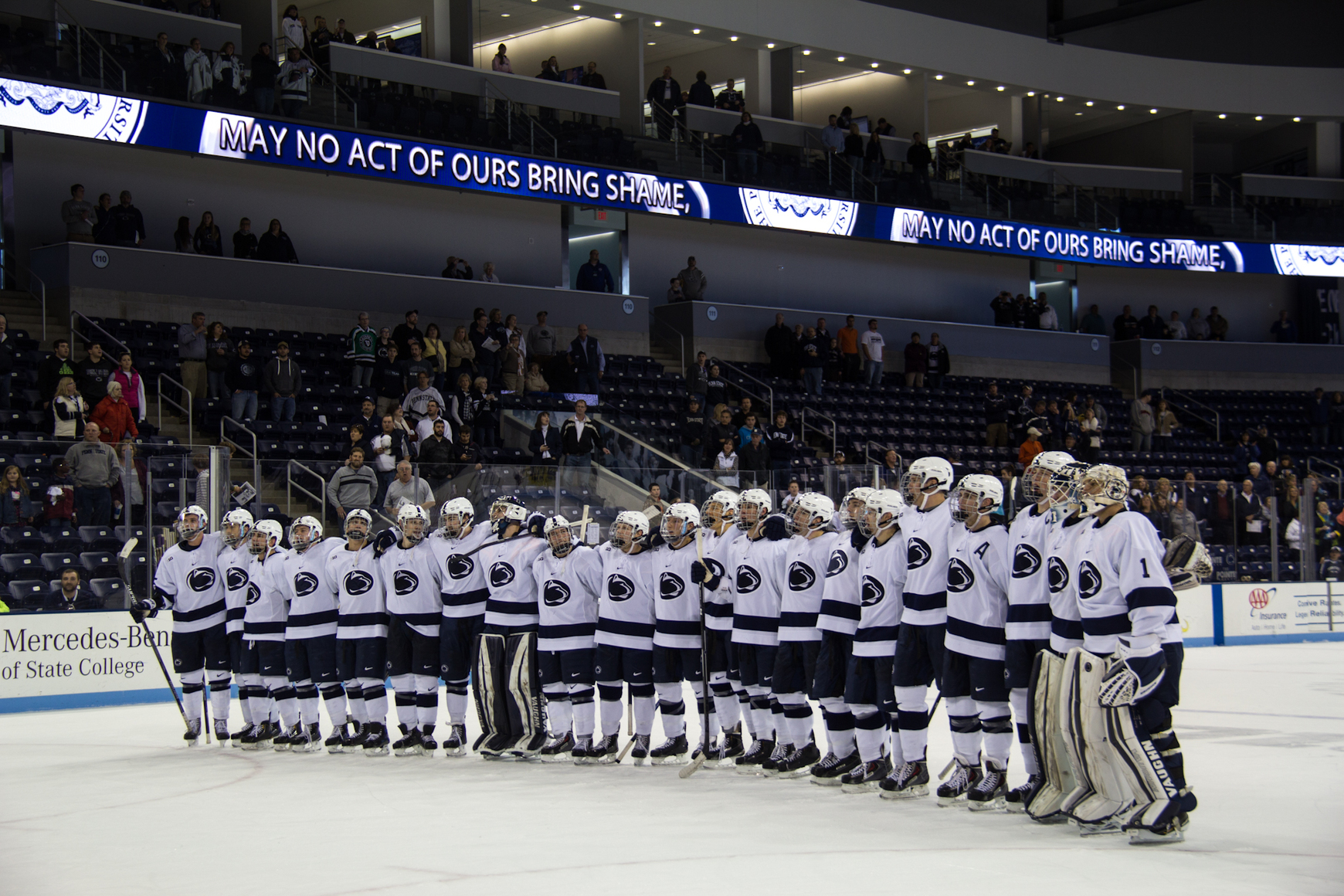 Is this Penn State hockey’s most important series ever? Probably not, but it feels that way this week.

The Nittany Lions are nearing the end of the best season in their short Division I history, but a slight slide in the standings may have drastic implications on their postseason play. After being near the top of the Big Ten for most of the season, a sweep last weekend courtesy of the second-to-last place Ohio State Buckeyes set the Nittany Lions back to fourth place in the six-team division.

This upcoming weekend, the No. 16 Michigan Wolverines will travel to Pegula Ice Arena to take on Penn State. The following weekend, Penn State travels to No. 15 Minnesota. Those two teams are respectively in first and second place in the Big Ten, and the Nittany Lions will need to win most of their remaining games to catch up.

The difference between a top-two seed and a bottom-four seed in the Big Ten Tournament is massive. The top two teams get a bye into the semifinals, while the bottom four have to play for the honor. Having to win two games to win the single-elimination tournament instead of three is clearly a substantial difference, and it would be wonderful for Penn State to reach that threshold.

That’s why these following two weekends will be telling for Penn State. As head coach Guy Gadowsky said on Tuesday, it’s essentially playoff time right now. Let’s take a look at how this weekend will shape up.

By most measures, Michigan looks like the better team on paper. Penn State has established its identity as a gritty team that loves to shoot the puck and beats opponents on explosive offense rather than stingy defense. The Wolverines are one of the few teams that can rival it, however.

Penn State’s identity is represented best through its dynamic first line, as is Michigan. Where Penn State has Casey Bailey and Taylor Holstrom (more on him later), Michigan has Zach Hyman and Dylan Larkin.

In net will be Eamon McAdam for the home team, facing off against either Steve Racine or Zach Nagelvoort – both of whom have had substantial success this season. Penn State comes into this series having lost five of its past six, while Michigan has won three straight after losing three in a row. Since the inception of Big Ten hockey, Penn State holds an advantage over the Wolverines, winning four out of seven meetings.

As we mentioned before, Penn State shoots and scores a lot. Like, historical shot and goal totals. Having the ninth-best scoring offense in the country won’t scare the Wolverines though, as they have the most goals per game of anyone.

Penn State does remain true to its shot totals, though. It has 2,410 total shot attempts this season, and 1,298 on goal. Michigan has figures of 2,048 and 1,026. The Nittany Lions should still be able to get more pucks on net, so the biggest storyline of the weekend will be whether it’s Penn State’s quantity or Michigan’s quality that finds the back of the net more frequently.

Gadowsky was struck with bad news earlier this week when he found out that Taylor Holstrom, who is second on the team in points, may be out for the rest of the season with an injury to his leg. In his absence, Casey Bailey will remain at right wing on the top line, David Goodwin will move to center, and Tommy Olczyk will move up to take over the left wing. Goodwin and Bailey’s chemistry, coupled with Olczyk’s solid two-way play, should still keep the unit effective.

On the other side of the ice, however, is one of the most lethal lines in college hockey, led by Zach Hyman and Dylan Larkin, who rank third and 13th in the nation in points. Hyman, a senior, leads Hobey Baker voting while the freshman Larkin was a first-round draft pick by the Detroit Red Wings last year.

Defense isn’t one of Penn State’s points of pride. The Nittany Lions are one of the few teams to have not registered a shutout this season. The team’s philosophy has been to just score more goals than it allows, and the first half of that phrase has been what it focuses on.

Fortunately, Michigan is the same way. Penn State has given up 92 goals through 32 games (2.88 per game), but get this: Michigan has given up 86 through 30, or 2.87 per game. The units on paper look more or less the same, so this weekend should be decided by whichever goaltender outduels the other.

For Penn State, sophomore goaltender McAdam will get the start. Although he has looked very fundamentally sound this year, he has also shown flashes of shakiness. One particular instance that comes to mind is the teams’ second meeting this year. Michigan scored eight goals on McAdam in an 8-1 thrashing.

At the other end, either Nagelvoort or Racine will get the start. The younger Nagelvoort has the better goals-against average and more starts, but the veteran Racine has the experience. The two players both have a save percentage of .908, significantly lower than McAdam’s .913.

So, What Will Happen?

Who knows? When Penn State wins, it’s usually thanks to its offense, but this might be the one team that it can’t straight-up outscore. The Nittany Lions’ defense and goaltending, which have been fine all season, will have to step up in order to level the ice. The unit will need to shut down Hyman and Larkin – something that few teams have been able to accomplish.

Michigan is the better team on and perhaps off paper, but Penn State has proven that it’s full of surprises. As Gadowsky said, it’s playoff time. Losing Holstrom, although it leaves a hole at the top of the lineup, might just be the extra motivation this team needs to take its play to the next level.

This series looks almost too close to call. I see Penn State holding the slight advantage, thanks to a home ice and all of the excitement surrounding the end of its historically successful season. The games could be one or two goals apart, and may see overtime. Penn State should come away with a split or a sweep, not only because it wants to, but because it needs to and it can.