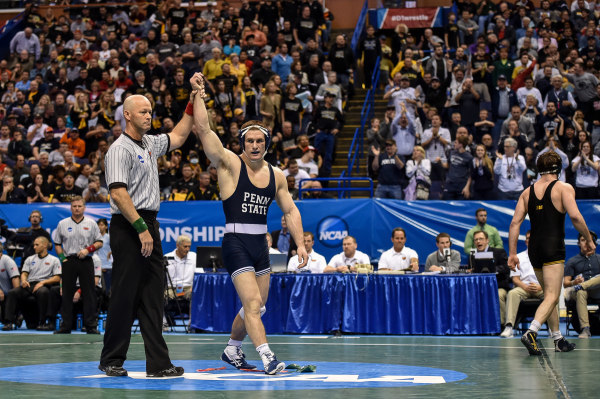 Matt Brown finally did it. The only honor that eluded the great Penn State wrestler over his esteemed his career was the big one, the individual national title. Tonight, in Matt Brown’s final match as a Nittany Lion, he made the leap. He became a national champion.

Brown’s championship did not come easily, and after an impressive run through the tournament he faced an extremely game Tyler Wilps of Pitt. Wilps is no joke, and gave Brown everything he could handle across all three periods. After an even first period that ended in a tie at 0-0, Wilps took the lead with an escape in the second that put him up 1-0 over Brown going into the final period. Brown then battled back, storming ahead to take a 3-1 lead. Wilps appeared to escape to make the score 3-2, but in what was the first of many controversial moments over the last minute, Cael Sanderson challenged the call. The referees determined that the escape was not valid, restoring Brown’s lead to 3-2.

Wilps tried again and escaped to make the score 3-2, then surprised Brown with a big takedown to go up 4-3 with 20 seconds left on the clock. Brown desperately sought an escape from bottom to even the score as the clock winded down. He got the point he was looking for when Wilps sunk to Brown’s legs and was called for stalling, pulling the bout even at 4-4.

Controversy erupted as Brown sought an escape in the final seconds to take the lead and win the match. In Wilps’ desperation to keep Brown under control, he committed a foul, locking his hands to prevent Brown from pulling away. While the refs did not make the call immediately, Cael Sanderson noticed and challenged. The replay showed the clear foul, and the refs overturned the no-call, giving Brown the win and the 2015 NCAA Championship at 174 pounds.

This served as a true storybook ending to Brown’s esteemed career. He lost a 2-1 decision in the 2013 NCAA final, and tonight he returned to the championship to finish what he started. He did just that, securing his place among the Lions’ all-time greats.

Jimmy Gulibon went 1-1 on Saturday, losing to A.J. Schopp of Edinboro via fall before securing fifth place by defeating Mason Beckman of Lehigh 9-5. Gulibon ends the year with a 26-9 overall record.

Penn State junior Morgan McIntosh faced defending national champion J’Den Cox of Missouri in the consolation semifinals, seeking a chance to claim a top-four finish. McIntosh grinded out a tough 3-1 win over Cox, putting himself into the consolation finals. Once there, he faced Scott Schiller of Minnesota. McIntosh utilized a series of takedowns to pull out a 12-7 victory and a 3rd place NCAA finish. He ends the season at 32-3 overall.

Heavyweight Jimmy Lawson ended his senior season in 6th place, falling once again to Iowa’s Bobby Telford in the 5th place match, 4-3. The two wrestlers were very evenly matched once again, but ultimately Lawson could not do enough to pull out the win.

Junior Jordan Conaway, yet another PSU All-American, closed out his tournament in 8th place. His performance served as a surprise to many, as he battled through a sometimes inconsistent season.

Overall, Penn State went 26-13 in the NCAA tournament. While the National Championship may be heading to Colombus with Ohio State, the Lions had another strong season nonetheless. With a strong group of returning wrestlers led by McIntosh and Gulibon, as well as a few blue-chip prospects waiting after a redshirt season, the future looks bright for Penn State wrestling.

I'm Mike Bacior. I major in Economics at PSU. I obsess over many things including mixed martial arts, the Philadelphia Eagles, and Taylor Swift. Find me on Twitter @MikeBacior or shoot me an email [email protected] 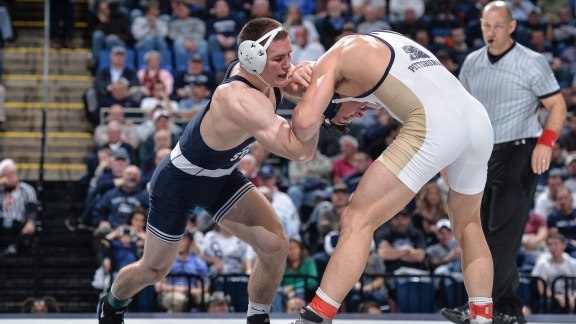 Penn State’s own Matt Brown added another impressive title to his resume when he was named Capital One Division I Academic All-America® of the Year this morning.

Why Do We Streak? Mifflin Streakers Share Their Answers