How Casey Bailey Will Help The Rebuilding Toronto Maple Leafs 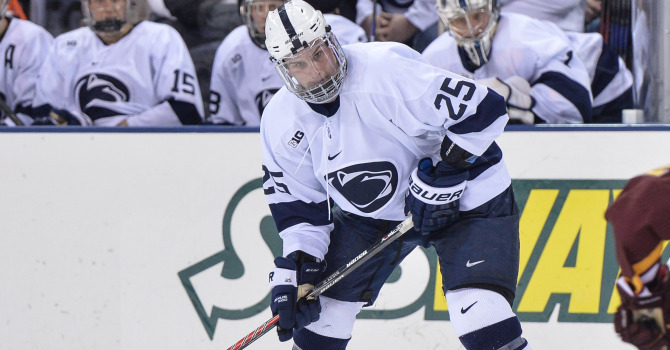 Penn State hockey’s all-time goals and points leader is headed north of the border, signing with the Toronto Maple Leafs of the NHL. For those not familiar with the NHL, Casey Bailey isn’t joining just any team; he’ll be lacing up his skates for one of the most storied franchises in league history. The Maple Leafs were one of the original six teams to join the NHL, beginning in 1917 as the Toronto Arenas, but adopted their iconic Maple Leafs nickname in 1927. Despite the franchise’s fabled past, the club hasn’t been to the playoffs since the heartbreaking first round collapse in Game 7 against the Boston Bruins during the lockout-shortened 2012-13 season.

The team is currently undergoing a rebuilding phase, and Bailey’s addition brings a much needed scoring element to the table.

The obvious benefit of adding a player of Bailey’s caliber is his scoring prowess. As previously mentioned, Bailey leaves Penn State with 45 goals and 80 total points — both vaulting him to the top of Penn State’s all-time scoring list. As it currently stands, Toronto ranks at No. 20 in total goals scored with 188 tallied on the year — a figure that played a big part in Toronto’s offensive struggles this season. A prolific scorer like Bailey gives the Maple Leafs a versatile player who knows how to get the puck into the net. Bailey’s style should translate perfectly from the collegiate ranks to the pros, as his sniper mentality poses a threat to score any time his stick touches the puck.

Bailey loves to shoot, especially from the top of the face-off circle, where his deadly wrister accounted for a sizable amount of his team-leading 22 goals in 2014-15. Bailey’s slap-shot is equally as effective, perfectly displayed by his one-timer that he blasted by Wisconsin goaltender Joel Rumpel in the team’s February 6 matchup against the Badgers.

Please, do yourself a favor and watch this absolute rocket of a one-timer from Casey Bailey (via @BigTenNetwork) http://t.co/ZLN1hxlYbM

Speaking of Bailey’s quick trigger finger, he led all Division I skaters with 211 shots in 2014-15, averaging out to 5.70 shots per game. To compare, Alex Ovechkin leads the NHL in shots per game with 4.9 — a full shot more than No. 2 leading shooter Max Pacioretty’s total of 3.9 per contest. This shows Bailey’s willingness to put shots on net, and proves that he isn’t afraid to let the puck fly.

As prolific as Bailey’s goal-scoring abilities are, he’s also equally effective passing the puck. Bailey totaled 18 assists in 2014-15 — good for third best on the team — and highlighted his abilities as an all-around playmaker on the ice, along with his talent as a facilitator who can maximize the offensive output of his line.

Bailey is no squirt, measuring in at 6-foot-3, 205 pounds, admirable size for an NHL caliber forward. He skates fluidly, and isn’t afraid to play physically and take the body along the boards. His long build gives him an imposing presence on the ice, and should complement his game when he suits up for Toronto.

Where He Matches Up

Don’t expect Bailey to make his professional debut skating out with Toronto’s first line, which includes James van Riemsdyk, Tyler Bozak, and Phil Kessel. I see him taking the ice on the team’s third line, but pairing best with Leafs’ second line center Nazem Kadri. Kadri is an electrifying weapon offensively, and despite a rather down year for his standards, is one of the more prolific playmakers on Toronto’s roster. With 36 points off 16 goals and 20 assists, Kadri knows how to find the open man, and could form a formidable duo with Bailey added to the lineup. Bailey will unfortunately have to wait until March 28 to pair with Kadri, as the forward serves two more games of a league mandated four-game suspension stemming from an illegal check to the head of Edmonton’s Matt Fraser.

Overall, Toronto gave Bailey the best chance to see time on the ice, and despite the team’s woeful 27-40-6 record, the signing of Bailey could be a match made in heaven as the former Penn State star tries to make a name for himself in the NHL.

Bailey will be joining the team this week, and aims to make his debut on Saturday against the Ottawa Senators.

Share via
How Casey Bailey Will Help The Rebuilding Toronto Maple Leafs
https://onwardstate.com/2015/03/24/how-casey-bailey-will-help-the-rebuilding-toronto-maple-leafs/
Follow @onwardstate
Send this to a friend