Onward Debate: When Should The 2015 Whiteout Be? 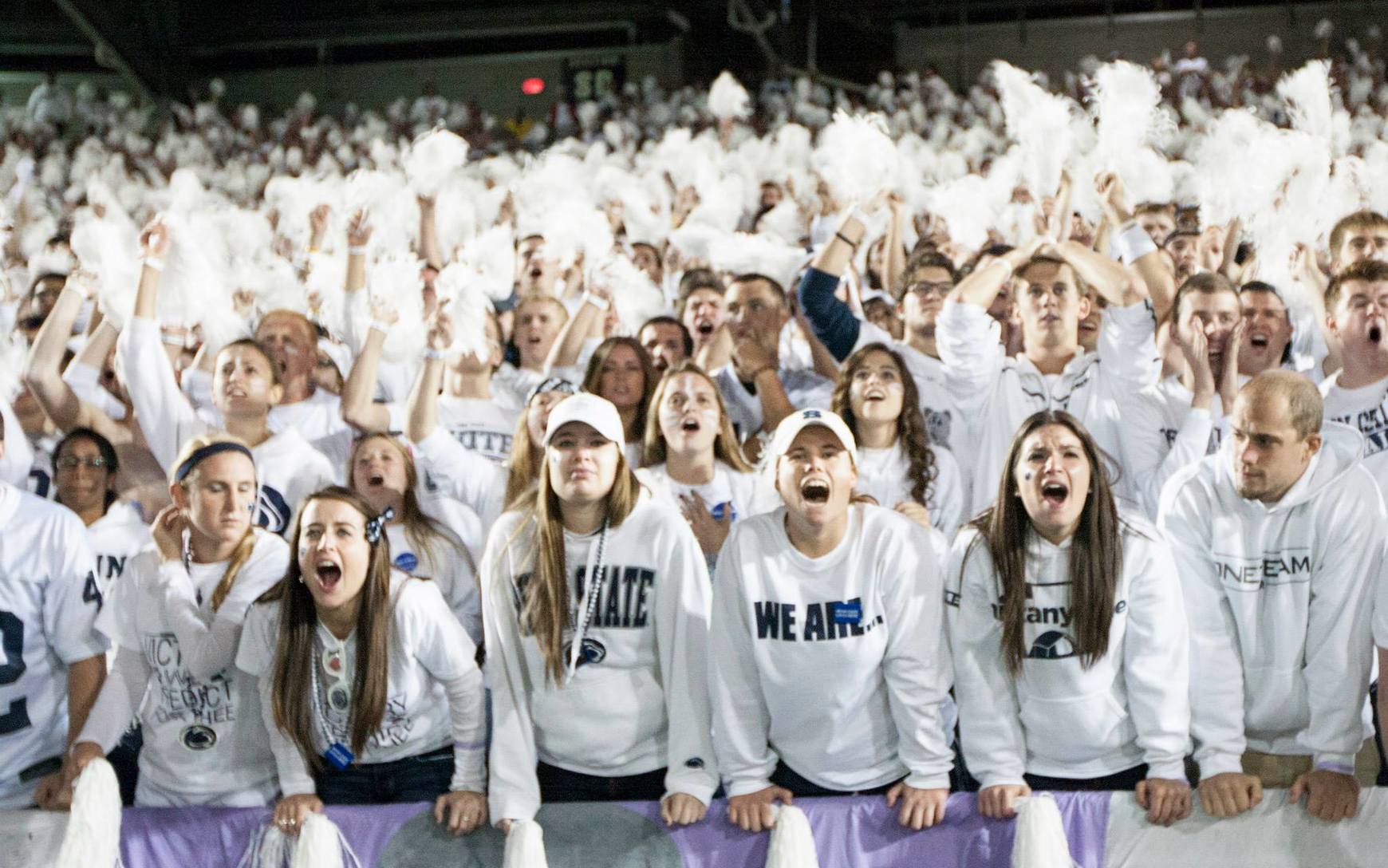 With Blue-White Weekend on tap, football is on everybody’s minds. Recently, a reader sent us an email about which game should host the 2015 Whiteout, arguing for a less conventional opponent: Army.

This got our staff thinking. The slate of 2015 Beaver Stadium games is underwhelming, to say the very least, leaving some ambiguity as to which game should drape the stadium in white:

Normally, Michigan would be the clear choice, but the program isn’t exactly in its best years, having fired coach Brady Hoke after a dismal 2014. Illinois has been whited-out before, but its program has since become the laughing stock of the Big Ten, sporting a 12-25 record since 2012. Rutgers desperately wants to be our rival, but certainly doesn’t have the history or roster to be a traditional Whiteout. The weak non-conference schedule speaks for itself, and Indiana is Indiana.

Without an easy choice for a Whiteout game, our staff debated which opponent is most deserving of seeing the greatest spectacle in college football.

I’ll get the cons of this choice out of the way now. It is undoubtedly a trite opponent, its selection meaning that Penn State would have the same two Whiteout opponents for a four-year span in the Wolverines and Ohio State. It would almost undoubtedly pale in comparison to the last Whiteout against Michigan. Michigan hasn’t been the national powerhouse it’s been known for some time now. This game is on the first Saturday of Thanksgiving break.

But does a trite opponent mean the Whiteout will be a disappointment? That certainly hasn’t been the case since I’ve been here. Will any game ever be better than the 2013 Whiteout against Michigan? Doubtful. Just because Michigan has fallen on some difficult times, do you hate it any less? The biggest knock on this selection is the time of the year during which it falls, and that’s a significant obstacle, sure. But Penn State would be wise to give students an extra incentive to stay in town for those games on the first Saturday of Thanksgiving break and give the seniors a packed student section to send them off…

…Which brings me to the pros of a Michigan Whiteout. To continue my point, Michigan is Senior Day, and the Whiteout has been held on Senior Day approximately zero times. With all the praise we’ve given to our strong senior classes over the years, we’ve yet to send any off with what is a reason many of them probably committed to Penn State. Yet many have told me the effect of a Whiteout is lost during afternoon games, which Big Ten November games have so often been. But the mandated November afternoon games are now a thing of the past, with the Michigan State-Maryland tilt on November 15 this season scheduled for primetime on the Big Ten Network. A matchup between schools of these followings could certainly result in turning on the lights — after all, Michigan did it for the first time ever in a Big Ten game just this season. That’s to say nothing of the fact that Michigan, for all of the criticism it’s taken in the past few years, still remains one of the elite programs in college sports. Jim Harbuagh left one of the most secure coaching positions in the NFL to return there to coach. Should we not show him the intensity he should expect from Beaver Stadium?

And, I mean, look at that schedule up there. No other program is even near Michigan’s echelon of historical excellence and current relevance. White-outing Rutgers gives it the satisfaction that we take it seriously, which should never happen. Illinois and Indiana are only relevant currently because their futility is funny. And while I respect the argument that Army could be a sign of respect, that’s what we have Military Appreciation Day for, and that is an event the administration here takes quite seriously and makes quite successful. In truth, it’s Michigan or no Whiteout, and the Whiteout is just too much of a cash cow to cancel.

As my fellow writers have and will point out, there is a lack of marquee home games this season. At the risk of sounding too curmudgeonly, the Whiteout used to be reserved for the big, must-see, have-to-be-there-in-person-or-else games, not just the most exciting game of the season. Think Ohio State in 2005. Notre Dame in 2007. Ohio State last season. The Whiteout is an event, and should be treated as such.

Certainly, there is an argument to be made to not have a Whiteout at all this season. As disappointing as that would be, it would focus the attention back on the students creating a genuine atmosphere of excitement, not something Penn State’s public relations decides to pump inorganic energy into in order to sell extra tickets to an otherwise dull affair.

But what if the Whiteout was instead used as a sign of respect? This idea was first suggested on the Rivals BWI McAndrew Message Board to hold the festivities against Army. With Army playing Penn State for the first time since 1979, the game on Oct. 3 represents a great opportunity for the university to pay respects to the armed services. Penn State already does a great job supporting active and retired service men and women on Military Appreciation Day, but with a large portion of West Point in attendance, this year’s game seems like the right time to extend a sign of gratitude. And what better way to do so than with an all-stadium Whiteout?

It wouldn’t just be any Whiteout, though. The student section’s “S-Zone” would take the shape of a red, white, and blue ribbon, while the Army band would perform the National Anthem before the game. There would also be a salute to veterans at halftime with ROTC members and cadets joining the ceremony. Throw in an F-16 flyover and you’ll have a game many won’t soon forget.

While it’s true Army doesn’t boast the same competitive prowess as Rutgers or Michigan (not to mention the lack of conference supremacy at stake), the atmosphere at Beaver Stadium would be something we’ve never seen before. With the stadium decked out in white, those in attendance who have served or are actively serving would be encouraged to wear colors so fans can find them in the crowd. By saluting Army, Penn State fans will only continue to enhance its game day reputation as some of the friendliest, most-inviting in all of college football. It’s a no-brainer.

Woah, woah. Calm down. I know it’s infuriating to see Rutgers mentioned as a rival to the Penn State Nittany Lions, a prestigious football program that has dominated the Scarlet Knights for all of history. But that program has taken a step back in recent years, and while that’s more the fault of Mark Emmert than the team, it’s an unfortunate reality. We saw that reality in action when Penn State traveled to Piscataway, N.J. in September to take on Rutgers. It took a fourth quarter comeback for the Nittany Lions to just barely edge the Knights.

Think back to the ire between the two fan bases in the week leading up to that game. Think back to the ire that continued into the week after. Rutgers fans were horrific to deal with. As I detailed after the game, I was spit at, cursed at, and had Sandusky referenced hurled my way. Sure, this says more about the class level of Rutgers fans than it does a legitimate rivalry, but isn’t the most important factor of a rivalry — after competitiveness — some dislike between the fan bases? That exists here, as does the competitiveness. At this juncture, Penn State can’t hang with teams like Ohio State, at least not over the course of a full season. For the time being, Penn State needs to prove itself worthy of again being a national powerhouse, and that begins with consistent victories over teams like Rutgers, Maryland, Purdue, and so on.

I’ll be honest with you. If the Michigan game wasn’t falling on a Saturday that almost guarantees a small crowd by Beaver Stadium standards, that’s the obvious choice. Penn State and Michigan are true rivals on every level and by every definition of that word. But what makes a Whiteout so great is the atmosphere. It undoubtedly needs to be a night game with 107,000 butts in 107,000 seats. I doubt that Michigan is a night game when most students won’t be in town. Rutgers, on the other hand, has been guaranteed as a primetime kickoff on the Big Ten Network.

This is the obvious answer. It would be nonsensical to have a Whiteout game against a non-Big Ten opponent like Army. It would be insane to white out what will almost certainly be an afternoon game with a limited turnout. It has to be Rutgers.

I know my opinion is going to be an unpopular one, so please hear me out. But I think if you have to debate which game should be the Whiteout, there shouldn’t be one.

Usually, when the home schedule comes out, there’s a game that people immediately notice, a game that sticks out. Ohio State in prime time fits the criteria, and so does Michigan on Homecoming. This year’s slate doesn’t have a single game that warrants the powerful force that is the Penn State Whiteout.

Look at the options:

Unfortunately, this has happened before. In 2010, the home schedule sucked just as bad as this year’s does. The team played Youngstown State, Kent State, Temple, Illinois, Michigan, Northwestern, Indiana, and Michigan State — not exactly an inspiring slate. The best game — and the game that featured a student section Whiteout in Matt McGloin’s first start — was against an underwhelming Wolverines squad in the final year of the Rich Rodriguez experiment. The athletic department rightly decided to not declare a Whiteout at all that year, and save it for the Alabama game in 2011.

Yes, Whiteouts are awesome. Yes, it would suck to not be surrounded by a sea of your friends, all donning the same color in solidarity with the team. But why cheapen the experience by declaring a Whiteout for a subpar opponent? Let’s wait until Ohio State comes to Happy Valley in 2016, kick its ass with a truly deserved Whiteout, and not dilute it by declaring one this season.

Share via
Onward Debate: When Should The 2015 Whiteout Be?
https://onwardstate.com/2015/04/17/onward-debate-when-should-the-2015-whiteout-be/
Follow @onwardstate
Send this to a friend