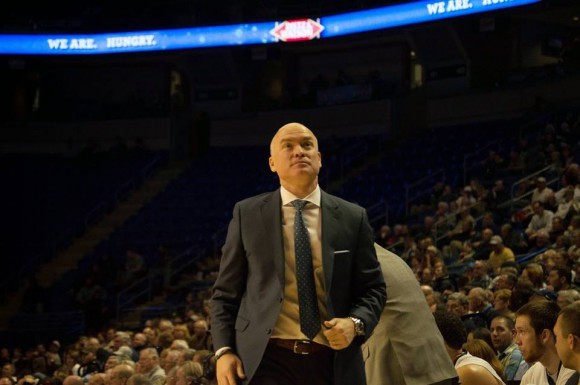 Fans around the country have been anticipating the Big Ten schedule announcement since the 2014-15 season concluded. Finally, that wait is now over, as the Big Ten released each school’s conference schedule — for both men and women — live on the Big Ten Network Thursday night.

In some exciting non-conference news, Penn State men’s basketball drew DePaul on Nov. 17, and will be broadcasted on ESPNU as part of the network’s Tip Off Marathon. This game — save for the team’s matchups against George Washington and Boston College — highlights a rather meager non-conference lineup.

The conference slate, on the other hand, is stocked with marquee matchups against the toughest opponents in the conference for both teams. The men’s team will play seven of its first 10 conference games on the road, which will include trips to Maryland, Michigan, Purdue, Northwestern, Ohio State, and Iowa. Notable home matchups include visits from Michigan State, Michigan, 2014-15 NCAA Tournament runner-up Wisconsin, and Indiana.

To say Penn State’s conference schedule is loaded would be a serious understatement, as recruiting alone in the past year was exceptionally strong throughout the conference. A number of ESPN Top-100 recruits — including top center Diamond Stone and top power forward Thomas Bryant to Maryland and Indiana, respectively — signed on with Big Ten schools, creating an influx of young talent that should reaffirm the conference’s status as the top conference in college basketball.

For the Lady Lions, who managed only six victories in 2014-15, things won’t necessarily be easier, but will surely be more manageable. The Lady Lions draw favorable home matchups late in the conference lineup against Maryland and Iowa — who finished No. 1 and No. 2 in the standings last season, respectively. Northwestern at the Bryce Jordan Center will kick off the conference slate for the ladies, followed by matchups at Minnesota, at home against Michigan State, and at Wisconsin. The Lady Lions can only improve upon last season, but defeating top-tier opponents late in the season should prove to test that logic.

Tip off is only three short months away, so prepare for what should be a fun year for both Penn State squads.