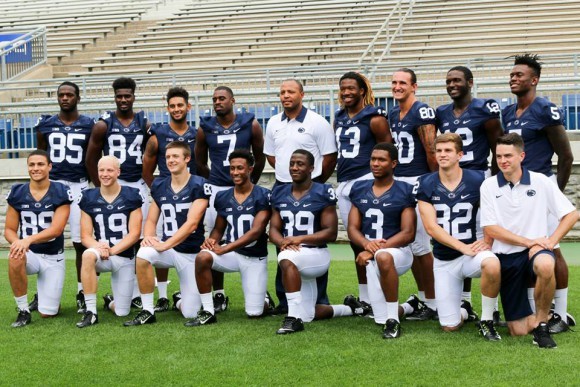 Four members of the elite 2015 recruiting class won’t have to wait long to make their Penn State debuts. James Franklin announced after practice on Wednesday that freshmen Brandon Polk, John Reid, Juwan Johnson, and Saquon Barkley are all expected to see the field in 2015 — a notion that should excite fans a great deal.

All four players came into Penn State with lofty expectations as four-star recruits, and the fact that Franklin gave each a vote of confidence bodes well for their standing on the depth chart. Franklin elaborated on his decision to green light the talented youngsters after practice.

“One of the challenges that we have here is that we graduate so many guys in three to three and a half years, we have to decide whether to redshirt a guy, but now he doesn’t come back for a fifth year,” Franklin said. “We have to decide the best way to take advantage of our roster, but that’s where we’re at right now. We have up to 14 young guys who could potentially see the field, we’re just in the process of making that decision.”

There’s obvious reason for excitement, especially with Johnson, Reid, and Barkley. Johnson, a towering receiver at 6-foot-4, 213 pounds, has a big frame and a wide catch radius. Ideally, he could see action in the redzone as a mismatch nightmare for opposing defensive backs, while developing into a safety valve for Christian Hackenberg in enemy territory. Wide receivers coach Josh Gattis further elaborated on his impressions of Johnson thus far.

“Juwan [Johnson] is a great kid, and an extremely hard worker. He’s got a great body, and is so passionate about the game of football,” Gattis said. “He comes from a family that has great athletes, and he’s going to bring another level to this offense.”

The same thing can be said about Reid, Barkley, and Polk, as all three players add a different dynamic to their respective positions. Reid is expected to add even more depth and talent to a young, loaded secondary, and could see time playing in a nickel back role.

Obviously, Saquon Barkley probably won’t be the featured back with Akeel Lynch in the fold, but that doesn’t mean he won’t see his share of carries. If anything, Barkley can provide running game coordinator Herb Hand an excellent change-of-pace option to complement the powerful Lynch. His shifty, explosive running style is one that could catch defenses off guard, while giving him vital experience early in his career that could prove important as he develops as a running back.

Coaches raved about Brandon Polk’s blistering speed — a trait that most likely put him in good standing with both Gattis and Franklin. While there is an abundance of talent in the wide receiver room this year, Polk’s early progression is a clear sign that his impact might be felt sooner rather than later.

Of course, all of this is pure speculation at this point, seeing as nobody has seen any of those freshmen in a college game. That said, Franklin’s decision to give the talented young players an opportunity to make an impact early is good sign. In a perfect world, the transition from high school to college football is seamless, and all four freshmen make an immediate impact.

Be sure to watch for the highly-touted first year players next weekend, when Penn State meets Temple for the regular season opener at Lincoln Financial Field.

Share via
Four Key Freshmen Not Expected To Redshirt
https://onwardstate.com/2015/08/27/four-key-freshmen-expected-to-play-not-redshirt/
Follow @onwardstate
Send this to a friend