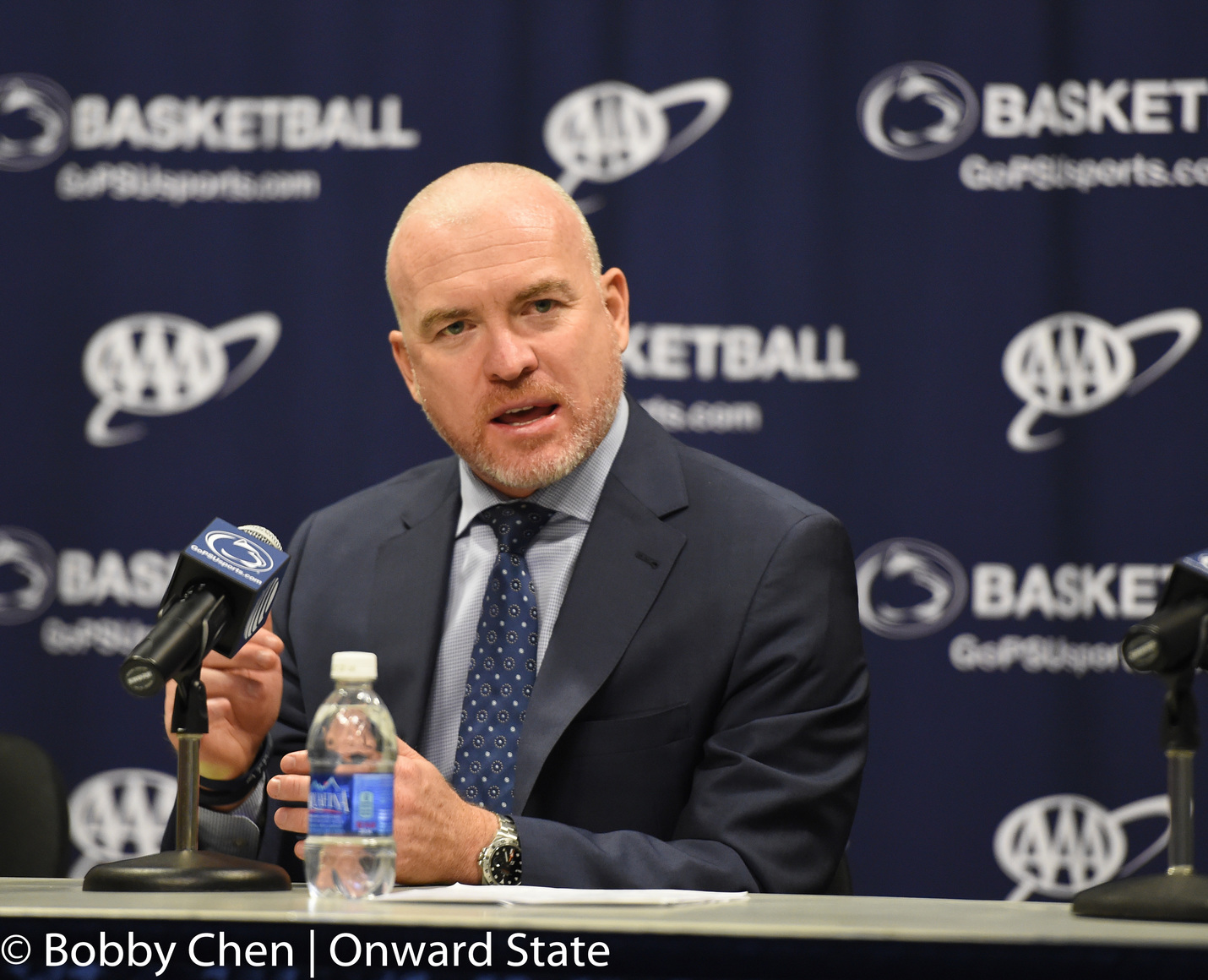 Pat Chambers is entering his fifth year as head coach of the Nittany Lions men’s basketball team. So far, he’s seen four years of hardships, struggles, and rejections from some top-rated potential recruits. It’s also been an incredible growing period for Penn State basketball. Many top rated recruits have decided on Penn State despite their peers’ rejection — Shep Garner and Josh Reaves are two of the most recent examples.

Last year, Penn State finished with an 18-16 overall record and a 4-14 record in the Big Ten. Coach Chambers was as optimistic as ever though on Tuesday during Media Day. Not only was he optimistic, but he had a confident attitude about him — one that knows something special is going on with his team. His confidence in the Nittany Lions moving forward was a huge focus on Media Day.

Chambers spent a lot of time talking about the incoming class of recruits, and how it is under a lot of pressure because it’s one of the best recruiting classes Penn State has ever seen.

Even though Chambers explained the incoming players have a long way to go, he described them as being very coachable and able to learn from their mistakes. He, along with many others who follow the team, are very optimistic about the skill this class can bring to the team.

Josh Reaves, the highly praised freshman and one of Penn State’s top recruits, got a lot of attention from Coach Chambers. On whether or not Chambers expects Reaves to start, Chambers said, “Josh has got to earn it. He’s got to earn it every single day just like Shep Garner does, just like Brandon Taylor does. He’s done very well.”

Jordan Dickerson, the big center who is a literal big force in the paint, got a lot of praise from Coach Chambers.

“If Jordan Dickerson is going to be the greatest shot blocker in Penn State history, which he has a chance to be, that will open up opportunities for us,” Chambers said. “I see a dominant force who can be one of the best shot blockers in the country.”

Being given the title of best shot blocker in the country and greatest in Penn State history is a significant title to live up to, but Pat Chambers is confident Dickerson will be able to rise to the occasion.

Chambers concluded Media Day by going over his recruiting “pitch” and how he was able to recruit such a great class. He described his recruiting as “an opportunity.” He said, “I think Penn State sells itself with the administration we have. I have most of my recruits meet Sandy [Barbour] and most recently meet Dr. Barron.” He also gave praise to Penn State fans and alumni. “When we bring them here on a football Saturday, it’s the fans, it’s the alums. It’s a no brainer.”

The players also emphasized the fact that they fell in love with the process of recruiting and being at Penn State. Shep Garner, Josh Reaves, and Mike Watkins all emphasized the fact that they never wanted to look anywhere else as soon as they visited campus and saw that the coaching staff and players believed in them, giving Coach Chambers reason to be optimistic and enthusiastic about the present and future of Penn State basketball.

Share via
Pat Chambers Optimistic About Penn State Basketball on Media Day
https://onwardstate.com/2015/10/07/pat-chambers-optimistic-about-penn-state-basketball-on-media-day/
Follow @onwardstate
Send this to a friend