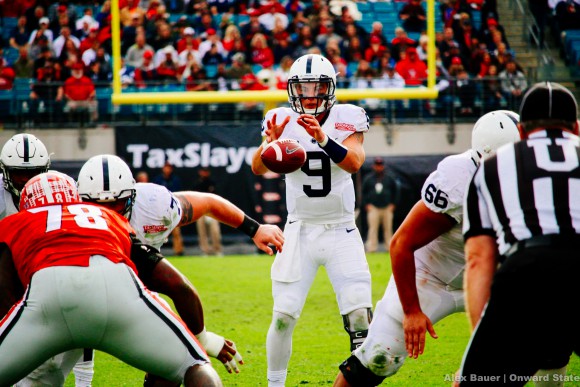 Trace McSorley and Christian Hackenberg are two completely different quarterbacks. Hackenberg stands 6-foot-4, while McSorley stands 6-feet — albeit generously. Hackenberg was a five-star high school recruit fielding a laundry list of offers from powerhouse programs, while McSorley only generated moderate hype as a three-star prospect — not that he didn’t have a dazzling list of scholarships either, but his didn’t come from the likes of Alabama or Florida. Two different athletes, two different playing styles. One is off to the NFL, while the other prepares to battle for the starting quarterback job at Penn State.

Not a lot was known about McSorley prior to this season. Fans knew he was a prolific passer for a decorated school during his high school days, and that he followed James Franklin from Vanderbilt, flipping his commitment prior to signing day. But with Christian Hackenberg firmly entrenched as the starter, Fans would have to wait for their chance to witness the dual-threat passer in action. But after two years of waiting in the wings, No. 9 was handed the reigns, potentially giving fans a glimpse into the future of Penn State.

With Hackenberg sidelined, McSorley took over about midway through the first half and played as good as an inexperienced backup quarterback in the middle of a bowl game would be expected to play: inconsistent and ineffective. The writing was on the wall for Penn State, as crushing defeat seemed imminent. But then, something marvelous happened — something that might give fans a glimmer of hope for the 2016 season. With each passing drive, McSorley grew more confident. He settled his feet, scanned the field, and stepped into his throws. He shuffled around the pocket with poise, and made smart decisions with the football in his hands where others might’ve faltered.

A gorgeous strike in the corner of the endzone to Geno Lewis breathed life into a team looking to erase a 21 point deficit. Eight minutes later, McSorley threw a pass that could’ve been mistaken for the type of throw an NFL quarterback might make, splitting three defenders before falling into the outstretched hands of DaeSean Hamilton in the endzone, leaving Penn State a mere touchdown away from tying the ballgame.

That wasn’t a lucky heave into the endzone. That was a calculated throw made by a confident quarterback. McSorley knew what was on the line, and he knew there were three defenders in the vicinity. The thing is, he simply didn’t care, because he knew he’d be able to get the job done. McSorley wasn’t the only one brimming with confidence during his 142 yard, two touchdown performance.

“I’d felt the synergy between myself and my teammates all through practice, so getting into the flow of the game was the biggest thing for me,” McSorley said. “My teammates helped keep me up and keep me confident, and everyone stepped their game up coming out of halftime.”

McSorely’s impressive showing came under the spotlight — a feeling that practice simply cannot replicate. Another feeling foreign to McSorley was entering the game knowing he wasn’t playing mop-up duty like he had in previous victories. Christian Hackenberg wasn’t coming back into the game, meaning it was his responsibility to guide the offense and get the Lions back on track.

“In my mind, I just try and equate it to practice,” McSorley said. “It was my time to run the offense, and the reinforcement my teammates provided was huge for me. I could tell that they really believed in me.”

The proof can be found in the team’s second half performance. Penn State was listless in the first half, but coming out of the locker room, it was easy to see that a switch was flipped on.The fiery McSorley lead the charge, and his teammates responded to that in a big way as they emulated his intensity, and nearly sent the game into overtime.

Make no mistake, nobody’s replacing the type of leadership and production that leaves with Hackenberg to the NFL, but that’s ok. McSorely’s performance should give him the upper hand in this spring’s upcoming quarterback battle between himself, Tommy Stevens, and newcomer Jake Zembiec. Nobody’s expecting McSorely to be Christian Hackenberg, because that’s simply impossible. Trace McSorley is Trace McSorley, and if he’s able to build on his TaxSlayer Bowl performance, a bright future lies ahead for the program.

James Franklin is months away from naming a permanent starter for 2016, but we learned something today; Trace McSorley can play, and he proved that on a national scale. It looks like he’s been taking notes during his two seasons of waiting behind Hackenberg.

Share via
Trace McSorley Makes His Case For Starting Quarterback Job With Impressive Bowl Showing
https://onwardstate.com/2016/01/02/trace-mcsorley-makes-his-case-for-starting-quarterback-job-with-impressive-bowl-showing/
Follow @onwardstate
Send this to a friend