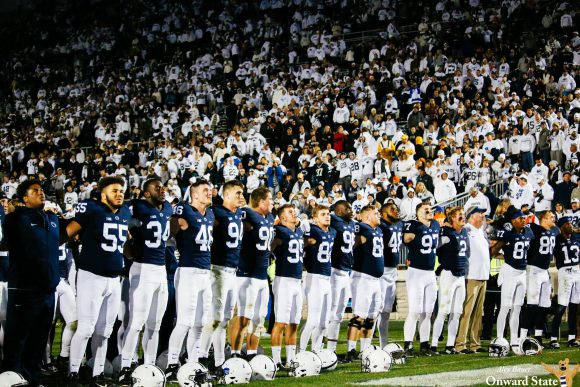 Throughout its history, Penn State fans have associated a number of songs with their beloved university. Whether it’s Seven Nation Army by the White Stripes or the Penn State Fight Song, folks in Happy Valley immediately think of certain songs when they think of the Nittany Lions.

The most iconic of these songs is perhaps the Penn State Alma Mater. Win or lose, Penn State’s student athletes in various sports will wrap their arms around one another and sing the official song of Penn State University to their undying fans, who are in turn swaying and singing it right back.

We all know the words, the tune, and the traditions associated with our Alma Mater. But how did it become the official song of Penn State?

Fred Lewis Pattee, who’s now best known as the namesake of the Pattee library, was an American literature professor at Penn State from 1895 to 1928.

Just six years after becoming a full-time professor in Happy Valley, Pattee wrote lyrics for a Penn State song in April 1901. He published a six-stanza version of the song as a suggestion to university president George Atherton.

The tune of the song was to that of “Lead Me On” by Cauviere, which was sung at previous Penn State commencement ceremonies. Pattee chose this tune because he felt it was best-suited to male voices, although the university was co-ed at the time.

Pattee decided to write the song because there was no single defining song of Penn State, but he had no indication how much impact his song would have on the history of Penn State.

The first singing of the Alma Mater took place at an alumni dinner two months later with Pennsylvania Governor James Beaver and President Atherton in attendance. Beaver loved the song and immediately declared it would become “the official song of Penn State.”

Despite Beaver’s praise for the new song, President Atherton did request one change after hearing it: He wanted to leave out the final two verses of the tune. You can read the full text of the two verses, which are almost never performed today, below.

Soon we know a guiding hand
Will disperse our little band,
Yet we’ll ever loyal stand
State to thee, State to thee.

Then Rah! Rah! for dear old State,
For our love can ne’er abate!
Ring the song with joy elate
Loud and long, loud and long.

Although Governor Beaver and President Atherton loved the Alma Mater as soon as they heard it, Fred Lewis Pattee realized there were flaws within his original rendition of the song.

Pattee wrote in his autobiography of his regret of two particular lyrics in the third stanza of his original rendition of the Alma Mater. Although Penn State was co-ed for 30 years when the song was written, Pattee chose to use “boyhood’s gate” and “into men” as lyrics in that third stanza because of the male-oriented ethos of the school.

These lyrics weren’t changed until 1975, which was declared as the International Women’s Year by the United Nations. Patricia Farrell, a former leisure studies professor at Penn State, acted as the spokeswoman for the movement that would change the lyrics of the Alma Mater.

The Penn State Board of Trustees accepted these suggestions that year, officially changing the lyrics of the Alma Mater to what we sing today.

Today, the Alma Mater is sung before and after home football games, and also at the end of virtually every other sporting event at Penn State. But as unthinkable as it may seem, the song was not always used in this now-conventional way.

In the 1940s, the Penn State Blue Band played an uptempo version of the Alma Mater during halftime of football games. Hummel Fishburn, the head of the music department and director of the Blue Band from 1939-1947, added the Alma Mater to the pregame show set list in his first year in charge of the band.

“It’s taken from the first phrase of the Alma Mater, done in fast time.” he said in a book on the history of the Blue Band about the version the band was then performing.

One of the most iconic playings of the Alma Mater came in November of 1947 when the Penn State Blue Band traveled to Annapolis with the football team for a game against Navy.

With United States President Harry Truman in attendance, the Blue Band included the Alma Mater in a halftime performance. Thoroughly impressed, he called the performance “superb” and thanked the university, the football team, and the band for a great day out.