‘Dancing In The Stands’: One Freshman Attempts The Ultimate Feat

THON Weekend may seem like a daunting experience for some. Weekends are normally times to relax after a week full of studying, exams, and grades. Spending a good portion of that weekend cramped in the BJC while getting little to no sleep is tough, even if you’re not staying nearly the full 46 hours.

But freshman Tom Dougherty thinks he can hold out. He’s been at THON with his fraternity, Alpha Delta Phi, since it all started on Friday. And he doesn’t plan on leaving until after this year’s fundraising total is revealed at 4 p.m. Sunday.

“When I got here, I kinda just felt that it was right,” Dougherty said. “Sometimes I get moments when my hair stands up on my arms when I’m at Penn State and I just have to stay wherever I’m at. This is one of those times.”

Clearly, Dougherty has grit — grit only those who can survive in ROTC can have. And that’s where Dougherty got it from. Being a member of ROTC has taught him how to persevere in harsh environments exactly like Section 106 of the Bryce Jordan Center.

But is “dancing in the stands” for all 46 hours really safe? After all, the 707 individuals actually registered to dance all weekend have special resources on the floor, like their DRCMS, basically 24-hour access to a good PB&J, and plenty of medical professionals (and professionals in training) to make sure everything goes well.

Dougherty says just because he isn’t privy to all these amenities doesn’t mean he can’t stand just as long as THON’s registered dancers.

“I’ve heard from some of my friends and from security like ‘Oh, you shouldn’t be doing that,’ especially since I don’t have much room to move around and I don’t get free food,” Dougherty said. “But I know how to stretch my body so I’m not too worried about that. And I make sure to air out my feet every so often with baby powder, and that I’m mentally and physically healthy.”

Clearly, Dougherty has things covered on his end. Survival is what he’s been trained for. This training even goes into his dress, down to the combat boots he has on his feet…

“I wear them during ROTC where I go 12 miles a day in them, so I thought I could go 46 hours in them,” Dougherty said.

…to the green tutu he wears with style.

“I didn’t realize that not a lot of guys wear tutus at THON, but I’m just rolling with it,” he added.

He doesn’t know what time it is either, but he has a rough idea from the FTK temporary tattoos on his arm from each time the Line Dance is performed. 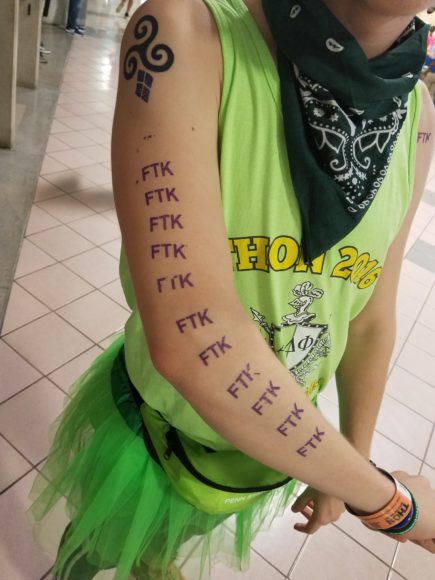 “Nobody is giving up on the floor. I just think it’s good to stay and watch them as they’re doing what they’re doing because they love THON so much,” Dougherty said. “I think that it’s cool that you can get involved as a freshman. Even just standing the stands, you’re taking part in it — something bigger than yourself.”

If anyone can go all 46, it’s ROTC-trained Tom Dougherty. And while it may be tough for most people to do, he thinks we all have it in us.

“I feel like people shouldn’t be afraid of it. I have a lot of energy and I feel like a lot of people do too,” Dougherty said. :Just because you can’t dance on the floor doesn’t mean that you can’t show support.”

Folks, please don’t try this at home…er…uh…in the stands of the Bryce Jordan Center. Seriously, there’s a reason THON provides all these resources for its 700+ dancers each year.

We caught up with Tom Sunday morning to see how he’s doing:

He still doesn’t know the time, but he guessed it was about 7 a.m. It was really 8 a.m. Personally, I’d rather think I had more time to go than less, so this will probably work out in his favor.

How does he feel? “Groggy, like pulling an all-nighter.” Or two all-nighters in a row, but who’s counting?

Has he changed clothes? “I’m sorry what? … oh, no.” The girl behind him snickered.

Here’s what his concourse-made “dancer meals” have been like:

Might we suggest a salad? Or maybe a good piece of fruit?

For others considering dancing all 46 hours in the stands, Tom says it’s most important to “know your limits” and to walk laps — lots and lots of laps.

He said he’d eventually like to dance for real on the floor at a future THON. As a freshman, he’s conceivably got at least three more chances.

Oh, and he’s still keeping track of each line dance. His FTK tattoos have overflowed to a second arm.

Here’s what 38 hours does to a person: