Replacing Coquese: Who Will Lead The Lady Lions Next? 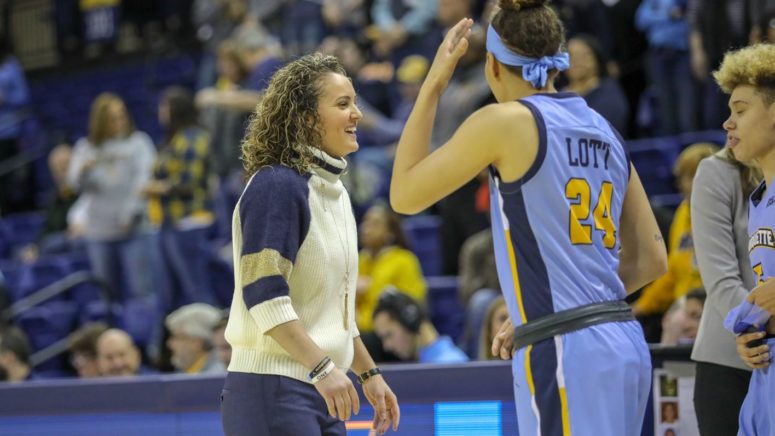 Following the decision to move on from Coquese Washington, Penn State women’s basketball is in the market for a new head coach.

The hiring will be just the third different leader of the Lady Lions in the past 40 years (the program’s entire NCAA history) and will mark another rebuilding effort, albeit under much different circumstances, like Washington faced at the beginning of her tenure in 2007.

Before the program began its slip in the final two seasons of Rene Portland’s career, it had missed the NCAA Tournament just three times in 23 seasons. It’s only been to the Big Dance four times in the 14 years since. Is it still a job coaches would jump at for the opportunity to lead?

We’ve assembled a list of five coaches with resumes including building mid-majors, leading established Power Fives, and histories attached to the Lady Lions. If you came here looking to see Suzie McConnell-Serio — yes, a Penn State legend as a player, but also a coach who went 67-87 at Pitt and had an investigation into verbal abuse allegations from former players at the end of her tenure — you can stop reading.

After another successful season with Marquette, Kieger is going to be a hot commodity for Power Five programs looking for a coach. The former Miami assistant took over in Milwaukee in 2014 and has delivered two Big East regular season championships and a conference tournament title in the past three years to grant the Golden Eagles three straight trips to the NCAA Tournament.

The 35-year-old just signed an extension last season, but the Big East on the women’s side isn’t the major conference it is on the men’s side. There’s history for such a switch from a Big East to Big Ten school, as well, with Michigan securing Kim Barnes Arico, who has likely led the Wolverines to their third NCAA Tournament in seven seasons, from St. John’s, after she turned the Red Storm into a Sweet 16-level team in 2012.

McLaughlin, currently the head coach at Penn, has had a history of building his Philly teams with local flavor. He spent 14 years turning Holy Family into a Division II power — winning 10 conference titles and becoming the fastest coach at any NCAA level to reach 400 wins. He followed that up by making the Quakers into one of the Ivy League’s best — taking them to three NCAA Tournaments and finishing in the conference’s top two with at least 20 wins in each of the past six years.

He knows how to recruit well in the state, but will he want to leave Philly? He’s credited not having to move his family out of the area as a major positive in his career.

Williams-Flournoy was a Lady Lion back from 1988 to 1991. Could she make her return after a handful of coaching stops in the near 30 years since?

In those stops, she’s held two head coaching positions: Georgetown (2004-12) and Auburn (2012-present). The Hoyas, who had all of one NCAA Tournament appearance before she arrived, went to the Big Dance three consecutive years under Williams-Flournoy, including the Sweet 16 in her final season. Her record at Auburn is 124-100 since taking over, and she’s likely led the Tigers to their third NCAA Tournament in four seasons.

Chmiel has been a key assistant on a number of notable women’s college basketball teams, including the Lady Lions during the Maggie Lucas/Alex Bentley years this decade when Penn State reached the Sweet 16 twice. They haven’t returned to the NCAA Tournament since he left in 2014 for Minnesota, where he spent a year before heading to South Carolina, where he was part of the 2017 national championship team.

He does have some head coaching experience, leading leading a pair of lower division men’s college teams in California and a National Women’s Basketball League team in San Jose before the organization folded.

The question is whether he would want to leave the Gamecocks. South Carolina has become a powerhouse in the women’s game and he has a long connection to the team’s head coach Dawn Staley, coaching her for a season in the WNBA before becoming part of her coaching staff at Temple.

Penn State athletic director Sandy Barbour hired Gottlieb away from UC Santa Barbara to become the Golden Bears head coach while she was at Cal in 2011. The team has all but secured its seventh NCAA Tournament bid in the eight seasons since the hire was made, which has included a trip to the Final Four.

Getting Gottlieb to move to a fizzling program at Penn State will take a lot more convincing from Barbour than joining a consistent postseason threat at Cal, but it all comes back to how the Lady Lions are viewed. Is it still a destination women’s basketball program with years of history, or is it just another Power Five rebuilding job?

Share via
Replacing Coquese: Who Will Lead The Lady Lions Next?
https://onwardstate.com/2019/03/13/replacing-coquese-who-will-lead-the-lady-lions-next/
Follow @onwardstate
Send this to a friend