Saquon Barkley, Miles Sanders Wind Up In The Same Division 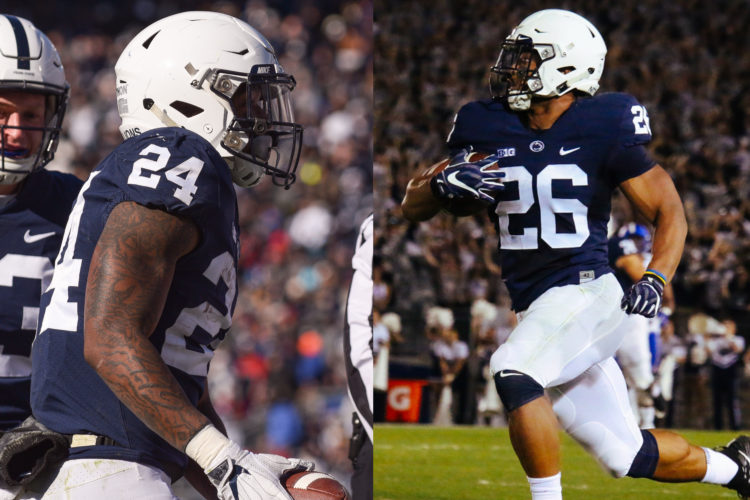 Penn State’s starting running back has been the first Nittany Lion off the board at the NFL Draft for two consecutive years, and they just so happened to wind up in the same division.

Miles Sanders was selected No. 53 overall by the Philadelphia Eagles in the 2019 NFL Draft just a year after the New York Giants selected Saquon Barkley with the second pick of the 2018 draft. The duo is the first pair of running backs from Penn State to be selected in the first two rounds in consecutive years since 1980 and 1981.

Oddly enough, the two division rivals won’t meet until week 14 of the 2019 season. The Eagles and Giants’ first meeting of the season will be played on Monday Night Football in Philadelphia before they wrap up the regular season on December 29 at MetLife Stadium.

Barkley expressed his excitement to face off against his former teammate twice a season on Twitter.

As evidenced by the rally following the Eagles’ Super Bowl victory last year, Philadelphia sports teams are pretty popular in Happy Valley. However, there are plenty of Giants fans in Happy Valley, too, so it’ll definitely be interesting to see the scenes in living rooms and bars across State College when New York and Philadelphia square off.

“[Johnson] loves Saquon,” Sanders said at the NFL Scouting Combine. “He loves Penn State guys. He said he was looking at Saquon since he was a sophomore. He sees the same things in me.”

Barkley firmly established himself as Penn State’s starting running back by the time Sanders arrived in Happy Valley as a five-star recruit in 2016. The New York Giants star rushed for 2,767 yards and scored 46 touchdowns while Sanders waited in the wings in 2016 and 2017.

Although Barkley stole the show during that time, Sanders showcased his potential in a backup role. He rushed for 6.8 yards per carry on 56 attempts as a freshman and sophomore before taking the reins as Penn State’s full-time starter last year.

Share via
Saquon Barkley, Miles Sanders Wind Up In The Same Division
https://onwardstate.com/2019/04/26/saquon-barkley-miles-sanders-wind-up-in-the-same-division/
Follow @onwardstate
Send this to a friend