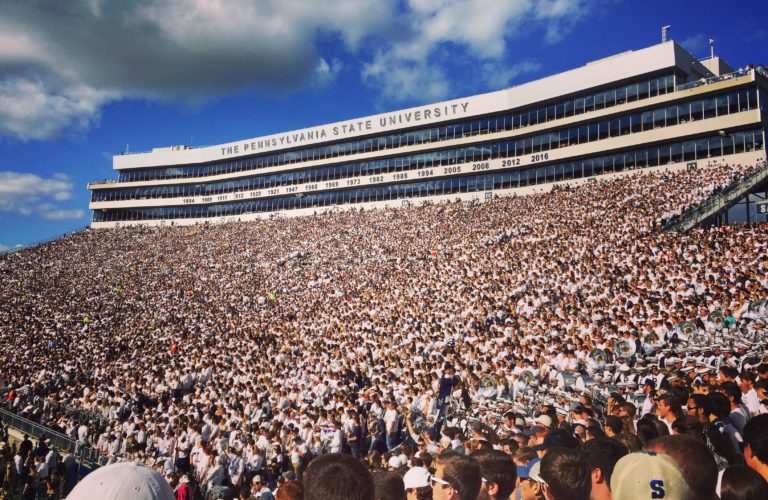 No. 15 Penn State will be back in action tomorrow for its season opener at Beaver Stadium. Head coach James Franklin is entering his sixth year at the helm of the Nittany Lions, and he’s coming off a 9-4 2018 season that ended with a defeat to Kentucky in the Citrus Bowl.

The Idaho Vandals have never played against Penn State before, and the FCS outfit will kick off the 2019 season at Beaver Stadium.

Idaho has mostly struggled under the direction of seventh-year head coach Paul Petrino. The Vandals posted a 9-4 record and won the Famous Idaho Potato Bowl in 2016, but Petrino’s record is 14-44 in his five other seasons as the team’s head coach.

Last year was Idaho’s first in the Big Sky, and it posted a 4-7 record and finished tied for ninth in the conference standings. The Vandals have only played against current Big Ten teams twice in program history — including a 27-17 loss to Michigan State in 2006 and a 38-17 defeat to Nebraska four years later.

The Vandals return starting quarterback Mason Petrino, who is also their best returning rusher after posting 245 yards and adding three scores on 77 carries last year. They’ll also have the services of leading tackler Christian Elliss back after he recorded 81 stops and four tackles-for-loss last year.

Mason Petrino is the son of Idaho’s head coach. He had a solid 2018 season leading the team’s offense. The senior’s 15-to-8 touchdown-to-interception ratio is good, but he completed only 60% of his pass attempts and totaled only 1,933 passing yards throughout the year. His backup — junior Colton Washington — is a 6’4″, 285-pound unit of a gunslinger. With a total of -51 rushing yards to his name, Washington isn’t much of a dual-threat, but there’s no arguing with his arm strength and size.

Petrino is the Vandals’ leading returning rusher, but the running backs who will line up with him in the backfield aren’t the most experienced. True freshmen Nick Romano and Kiahn Martinez are the first two names on Idaho’s depth chart at the position, and they’ll need to replace Isaiah Saunders, who totaled 945 yards and six touchdowns on the ground last season.

Wide receiver is perhaps the strength of Idaho’s offense, as it boasts two experienced weapons in Jeff Cotton and Cutrell Haywood. Although the team’s top wideout from 2018 — David Ungerer — won’t be back, Cotton and Haywood are, and they combined for 1,145 yards and 13 touchdowns last season. John Reid (5’10”, 181 pounds) and Tariq Castro-Fields (6’0″, 197 pounds) aren’t the most physically imposing cornerbacks in the world, so they might have some trouble dealing with the size of Cotton (6’2″, 204 pounds) and Haywood (6’0″, 204 pounds).

The offensive line features senior Noah Johnson at guard. He was named an FCS preseason All-American by Athlon Sports and Hero Sports, which also named him a third-team All-American following the conclusion of 2018. He’s the latest player to carry on Idaho’s “Guard U” legacy, which includes longtime NFL stalwarts Mark Schlereth and Mike Iupati.

Junior linebacker Christian Elliss is undoubtedly the star of Idaho’s defense after leading the team with 81 tackles last year. He posted four tackles-for-loss last season, as well, and he was named to Phil Steele’s preseason All-Big Sky second team entering 2019.

Cornerback Lloyd Hightower earned third-team All-Big Sky honors entering this weekend. He broke up 13 passes throughout last season. Hightower is 5’11” and 189 pounds, but he posted a solid 44 tackles — 3.5 of which came for a loss of yardage — in 2018. He’ll be flanked by redshirt freshman Christian Nash, who transferred to Idaho from Utah State after last season.

The Vandals’ defense will enjoy the services of several transfers at every position on the field. Defensive lineman Noah Elliss — Christian’s younger brother — joined the team for this season after kicking off his college career at Mississippi State. The 6’4″, 347-pounder will get the start at defensive tackle against Penn State.

Linebacker Robert Miller, defensive end Kayode Rufai, and safety Davontae Ginwright are among the other transfers in who will immediately step into the Vandals’ starting lineup this weekend. The three players moved to Idaho from Northwest Mississippi Community College, Boise State, and Western Michigan, respectively.

Idaho’s secret weapon is definitely redshirt junior kicker/punter Cade Coffey, who somehow managed to launch an 80-yard punt (!!!!) last season. The preseason All-American finished the 2018 season with just six touchbacks on 64 punts, and he managed to pin his opponents inside their 20-yard line 20 times while also handling kickoff duties. Coffey went 8-for-11 on field goal tries last year, and his career-long field goal is 46 yards.