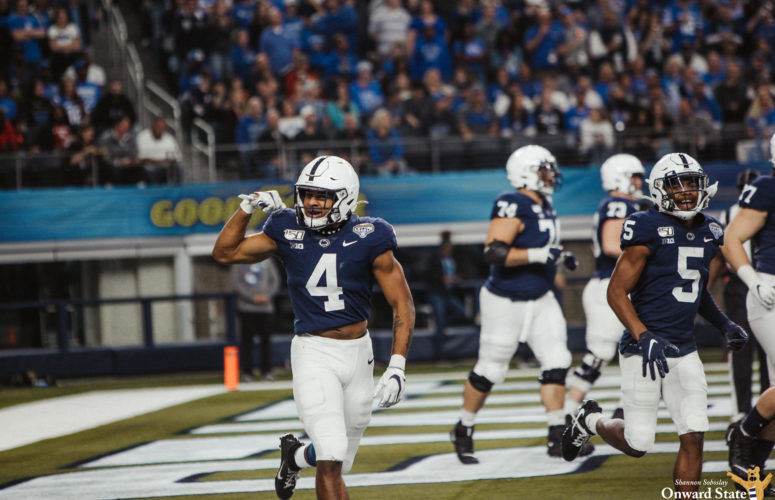 While the passing game wasn’t always there for Penn State, the Nittany Lions finished with an absurd 396 yards on the ground. Journey Brown was clearly the key for the offense, but Memphis couldn’t do much to stop any of Penn State’s running backs. The Tigers had plenty of scoring as well, but a few timely turnovers for Brent Pry’s unit proved massive for the Nittany Lions.

Penn State received the opening kickoff but went three-and-out on its first possession, picking up just one yard of offense. The Tigers struck first by putting together an 11-play drive that finished with a 48-yard field goal by Riley Patterson.

The Nittany Lions stormed back with a massive 32-yard touchdown run by Journey Brown that included no less than four broken tackles. The scoring drive took just three plays and 56 seconds, and Penn State took a 7-3 lead with 9:56 remaining in the first quarter.

A 56-yard connection from Brady White to Kedarian Jones on Memphis’ next possession helped the Tigers get into Nittany Lion territory. Patrick Taylor finished off the drive with a three-yard touchdown run and his squad took a 10-7 lead.

After a few defensive stops, the Nittany Lions’ offense came back to life with an eight-play, 45-yard drive that was capped off by a one-yard scoring rush by Noah Cain. A 15-yard catch and run by KJ Hamler put Penn State on the goal line, and the freshman running back took over from there. The Wild Dogs woke up after the score, as Micah Parsons and Yetur Gross-Matos forced back-to-back sacks to hand the ball back to Clifford and Co.

The fun didn’t stop for Penn State after that. A 26-yard punt by Adam Williams gave the Nittany Lions the ball at the Memphis 32-yard line, and Devyn Ford punched it in for a two-yard score after a four-play drive. Penn State took a 21-13 lead with 7:47 remaining in the first half.

The Nittany Lions weren’t done with the end zone yet, as Brown took it 56 yards to the house on the first play of the next possession. Penn State scored 21 unanswered points in less than six minutes of play (!!!).

After the Tigers scored on a one-yard rush by Kenny Gainwell, the Nittany Lions responded through the air. Clifford found Jahan Dotson open on a screen for a four-yard score and the Nittany Lions took a 35-20 lead. Memphis closed out the first half with a 44-yard field goal by Riley Patterson and shortened Penn State’s lead to 35-23 into halftime.

It didn’t take long for the scoring to get going in the second half, as Memphis drove 75 yards in just 2:44 and finished with a one-yard scoring rush by Brady White. Clifford was picked off on the ensuing Penn State possession, and Patterson followed it with a 51-yard field goal. Suddenly, Memphis trailed just 35-33 with 10:24 remaining in the third quarter.

Penn State responded with an eight-play, 3:06 drive but couldn’t punch it into the end zone. Instead, Jake Pinegar hit a 45-yard kick to give the Nittany Lions a 38-33 lead.

The Nittany Lions drove into Memphis territory on their next possession, but a massive stop on fourth and short gave the ball back to the Tigers. Garret Taylor stepped up on defense though, as he nabbed a Brady White pass that was tipped and took it to the house. The Nittany Lions took a 45-36 lead late in the third.

Memphis responded with a solid 51-yard drive, but once again couldn’t punch it in the end zone. Patterson was called on yet again, and the kicker nailed a 51-yard field goal to shorten Penn State’s lead to 45-39.

Noah Cain had an answer for the field goal. The freshman carried the ball on six consecutive plays to close out Penn State’s drive and capped it off with a one-yard touchdown rush. Clifford found Pat Freiermuth open on the two-point conversion, and Penn State took a 53-39 lead with 6:31 remaining.

The Tigers began to put together another drive, but a pass intended for Damonte Coxie was picked off by Marquis Wilson on Penn State’s own goal line. The Nittany Lion offense took over with just 4:36 remaining.

A steady diet of Journey Brown and Noah Cain helped to run the clock all the way down on the Nittany Lions’ final possession. Memphis got the ball back in time for one last play, but Brady White was sacked by Jayson Oweh to close out this one.

James Franklin and the Nittany Lions will return to Happy Valley with a third 11-win season in the past four seasons. Penn State won’t play in Beaver Stadium again until the Blue-White game on Saturday, April 18.