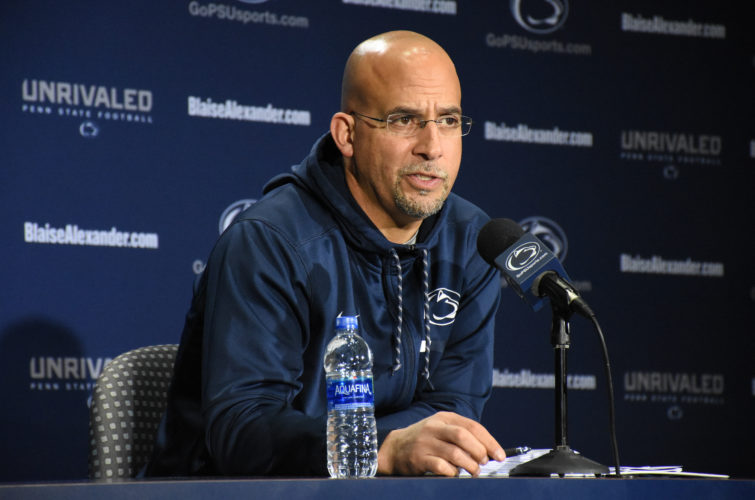 Penn State football has released the terms of head coach James Franklin’s six-year contract-extension that was previously announced on December 6.

The deal, which is slated to run through 2025, will pay Franklin a total of $35.4 million over the next six years. It carries an average of $5.9 million in guaranteed compensation per year — an upgrade from the $5.35 million per year that his previous contract paid him.

According to USA Today’s list of college football’s highest-paid coaches, Franklin’s new average annual base compensation of $5.9 million would’ve ranked 11th in the nation last season — exactly where he was ranked before this extension. In 2019, Penn State’s head coach was the third-highest paid in the Big Ten behind Michigan’s Jim Harbaugh and Purdue’s Jeff Brohm.

In addition to his base compensation, Franklin’s new deal comes with a smattering of bonuses. He’ll receive a retention bonus of $300,000 this year, and that’ll increase to $500,000 in each of the five remaining years of the deal. Each retention bonus will be paid out on December 31. On top of that, Franklin can also receive a maximum of $1 million in performance bonuses per season.

Here’s the full list of the head coach’s incentives in his new deal:

If Franklin leaves the Nittany Lions for another job in college or the NFL, the buyout clause begins at $5 million in 2020 and will decrease by $1 million in each year until 2025. There is no buyout clause in place if the head coach leaves the team in the final season of this contract.

Franklin has been linked with a move away from Happy Valley multiple times throughout his Penn State career. Texas A&M, USC, and Florida State have all been linked with the head coach over the past three-plus years. Athletic director Sandy Barbour told reporters that she actually doesn’t mind seeing her head football coach linked with other teams prior to Penn State’s 53-39 victory over Memphis in the 2019 Cotton Bowl Classic.

“I love that Penn State has a head coach that other people want,” Barbour said. “This contract — any contract — is not going to stop that, and I don’t really want it to. I want us to continue to have the success that draws other people to James, but he’s a Penn Stater. He’s our coach, and it’s going to remain that way.”

After factoring in bonuses, Franklin received $5,650,000 in total compensation from Penn State for the 2018-19 academic year in which the team won nine games and lost to Kentucky in the Citrus Bowl.

Share via
James Franklin\'s Contract Extension By The Numbers
https://onwardstate.com/2020/02/26/james-franklins-contract-extension-by-the-numbers-2/
Follow @onwardstate
Send this to a friend