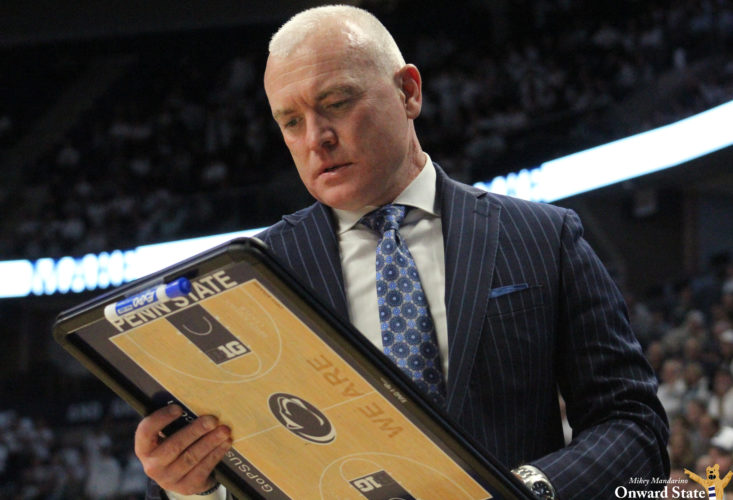 “I can tell you as difficult as this news may be, both President Barron and I believe this is the right outcome,” Barbour said.

She added Penn State won’t disclose many details of the personnel matters involved in Athletics’ internal investigation. Barbour reiterated her department is focused on supporting student-athletes amid this “difficult and unexpected news.”

Chambers delivered the news to the team at around 4:30 p.m. today, Barbour said. She noted there was “a little bit of shock” and disappointment among the team.

Barbour added both she and the team remain comfortable with interim head coach Jim Ferry taking the reins.

“I am confident that he and our talented staff will provide strong, focused, and determined leadership to our young men,” Barbour said.

In the meantime, Penn State will begin a national search for Chambers’ eventual replacement, according to Barbour.

New misconduct allegations surfaced after former Penn State guard Rasir Bolton alleged a comment Chambers made involving a “noose around [his] neck” led him to transfer. The investigation was conducted jointly by Penn State’s Affirmative Action and Athletics Integrity offices, and results were obtained “within the last two weeks.”

Vice President for Intercollegiate Athletics Sandy Barbour named assistant coach Jim Ferry the team’s interim head coach for the 2020-2021 season. He has 30 years of coaching experience under his belt and recently coached at Duquesne from 2012 to 2017, amassing a 60-97 overall record.

Original Story: Penn State men’s basketball coach Pat Chambers is reportedly expected to step down from his role with the team, according to CBS Sports insider Jon Rothstein.

According to Rothstein’s sources, Chambers’ departure is expected to be announced “soon.” He’s currently signed to a deal with the university through the 2021-2022 season.

Penn State Athletics did not immediately respond to a request for comment on Chambers’ alleged departure.

Should this be the end of his career with the Nittany Lions, Chambers will have posted a 148-150 regular-season record during his nine years in Happy Valley. Chambers led Penn State to an NIT Championship in 2018 after the team went 26-13 overall.

Share via
Pat Chambers Steps Down As Penn State Hoops Coach
https://onwardstate.com/2020/10/21/pat-chambers-steps-down-as-penn-state-hoops-coach/
Follow @onwardstate
Send this to a friend