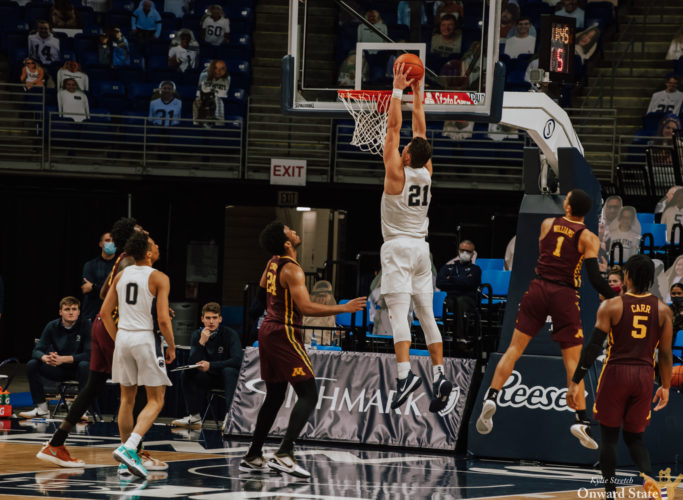 Original Story: The King of Delco is reportedly back in Happy Valley.

According to a report by Jon Rothstein, Penn State men’s basketball star big man John Harrar will return to Micah Shrewsberry’s squad for another season of college hoops with the Nittany Lions.

Harrar was one of six players who entered the transfer portal this past March just after Shrewsberry was hired as head coach. He now joins Izaiah Brockington and Seth Lundy in returning to the Nittany Lions, while Myreon Jones (Florida), Jamari Wheeler (Ohio State), and Trent Buttrick (UMass) have all found new teams.

The 6’9″, 240-pounder from Wallingford, Pennsylvania was a key piece for the Penn State this past season. The Nittany Lions lacked size, so Harrar was asked to carry the load for much of the 2020-21 campaign. He averaged 8.8 points and 8.8 rebounds, and played in all 31 games for Jim Ferry’s team.

Harrar also served as a captain for the group alongside Wheeler, and would be a massive boost for Penn State again next season. He was also named an All-Big Ten honorable mention just after the end of the regular season.

The senior has yet to confirm his decision to Happy Valley, but we’ll update this post with more informaiton as as it becomes available.

Share via
John Harrar Will Return To Penn State Hoops
https://onwardstate.com/2021/04/20/report-john-harrar-will-return-to-penn-state-hoops/
Follow @onwardstate
Send this to a friend