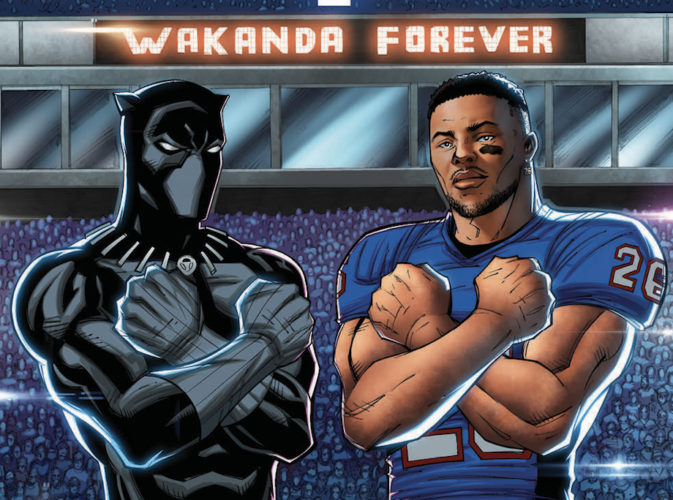 Over the years, we’ve seen Saquon Barkley do it all. Now, he’s making the jump to comic books.

The New York Giants running back and Penn State legend will appear on a variant edition cover of Black Panther No. 1, which is set to release on November 10. The new comic series will reboot Marvel’s Black Panther “with an action-packed espionage story.”

On the cover, Barkley joins the titular hero while crossing arms to represent the famous “Wakanda Forever” salute.

“I’ve been a Marvel fan my entire life, so appearing on a Marvel comic cover side-by-side with T’Challa, the Black Panther, is absolutely a dream come true,” Barkley said in a release.

The special variant comic cover was produced through hustl., a sports and entertainment agency. Chief Operating Officer Kei Harris said Barkley was a no-brainer choice for the appearance.

“We could not have asked for a better comic book or athlete for the launch of our collectible variant covers program,” Harris said. “An insanely talented athlete and a wonderful and generous person, Saquon will be the first in a line of greats to appear on our exclusive, specially designed Marvel variant covers.”

Although Barkley’s variant cover won’t release until November 10, you can preorder a copy for $29.99 today. Each book comes with a certificate of authenticity.

Share via
Saquon Barkley To Appear On Black Panther Comic Book Cover
https://onwardstate.com/2021/10/05/saquon-barkley-to-appear-on-black-panther-comic-book-cover/
Follow @onwardstate
Send this to a friend