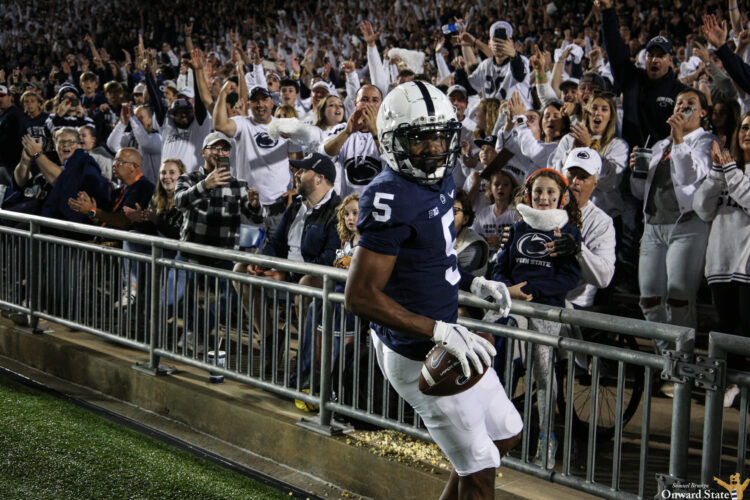 In case you lost track, the Nittany Lions already have two ranked victories under their belts this season. The season-opening 16-10 victory at Camp Randall Stadium was against a Wisconsin team ranked No. 12 in the nation at the time, and while the Badgers now sit out of the AP Top 25 at 1-3 overall, their other two losses have come at the hands of talented Notre Dame and Michigan squads.

Up to this point, however, the Nittany Lions’ most notable win is clearly the White Out victory over Auburn. The Tigers were ranked No. 22 at the time, and Bryan Harsin’s squad now sits at 4-1 with a No. 18 ranking after last weekend’s win over LSU at Death Valley.

Penn State now has already two ranked wins behind it just five weeks into the season, which is two more than it had at this point in any of James Franklin’s seasons in Happy Valley. In fact, not counting the Cotton Bowl Classic, the Nittany Lions only had three total wins over ranked opponents during its last “real” season of football back in 2019.

One of the most notable ranked victories during that 11-2 run was a road battle against No. 15 Iowa at Kinnick Stadium. Penn State took down the Hawkeyes 17-12 in a gritty, classic Big Ten matchup that included 102 rushing yards from then-freshman Noah Cain. The Nittany Lions are expecting another brutal, ground-it-out contest this weekend when they travel to Iowa City to battle against the No. 3 Hawkeyes.

As big as this weekend’s game will be, however, it’s only the beginning of a brutal slate of Big Ten play for the Nittany Lions. After a well-deserved bye week and a home game against a 2-4 Illinois squad, Franklin’s team has games left against No. 9 Michigan, No. 11 Michigan State, and No. 7 Ohio State. Don’t forget about Maryland and Rutgers, either, who have both received votes in the AP Top 25 Poll this season.

Considered by most to be the second-best conference in college football, the Big Ten has offered the Nittany Lions plenty of tough schedules before. However, it’s arguable that Penn State hasn’t faced a slate this tough in James Franklin’s tenure. With five ranked regular-season opponents on the schedule at the moment, it would match 2019’s total.

However, several seasons prior have included consecutive battles against some of the top teams in the conference. 2017 likely comes to mind for many fans, as the Nittany Lions needed to face No. 19 Michigan, No. 6 Ohio State, and No. 24 Michigan State in a three-week span.

This season, the Nittany Lions follow Iowa with a bye week, Ohio State with Maryland, and Michigan with Rutgers. Penn State will finish the season with its battle for the Land-Grant Trophy against Michigan State.

As difficult as this slate remains, the Nittany Lions can lean on the fact that they already have two ranked wins behind them, including one on the road. Heading into what James Franklin knows is one of the toughest environments in the Big Ten, Penn State will see if that confidence can carry into yet another massive victory in 2021.

“It’s a tough environment. There’s no doubt about it,” Franklin said. “What makes it challenging is the size of the crowd. The intensity of the crowd, and then kind of the way their field is set up. The sidelines are tight. They are right on top of you.”

Share via
Taking Stock Of Penn State Football\'s Brutal Schedule Ahead Of Trip To Iowa
https://onwardstate.com/2021/10/06/taking-stock-of-penn-state-footballs-brutal-schedule-ahead-of-trip-to-iowa/
Follow @onwardstate
Send this to a friend