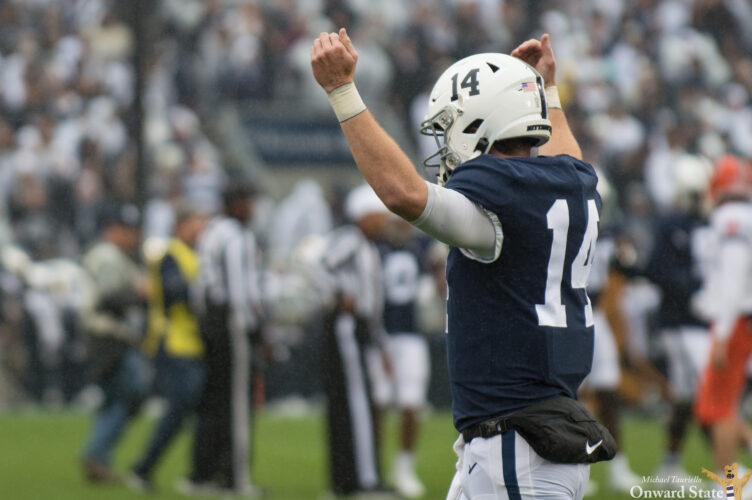 Entering the bye week at the midpoint of the season, Sean Clifford’s drastic improvement from last year’s ugly campaign was one of the most pleasant surprises of 2021 for Penn State football thus far.

When the quarterback went down in second quarter against Iowa two weeks ago, it was proven just how important the redshirt senior is to this offense. Penn State was up 17-3 when Clifford was knocked out, but a Ta’Quan Roberson-led unit struggled to do much of anything, and allowed the Hawkeyes to climb all the way back and win the game.

Clifford did have a bye week to try and recover from whatever injury he sustained, but it was clear Saturday he wasn’t his usual self.

“We just had way too many guys that played significant roles in that game that did not practice… full-speed, full-go all week long,” James Franklin said postgame. “Sean was one of those guys.”

It was made public on Wednesday of this past week that Clifford was practicing with pads on, and even had been taking reps earlier in the week. Franklin noted that the quarterback was doing everything he could to get to a point where he could play. Clearly he did enough, in the eyes of the coaches and the medical staff, to put him on the field against the Fighting Illini.

“We felt like Sean gave us the best opportunity to win,” Franklin said.

The coach added that the team “had confidence” Clifford would be able to play throughout the week. The quarterback’s health improved on a day-to-day basis, and there was enough positive feedback to slot him in as QB1.

Despite the fact that he was able to play, Clifford was limited in what he could do against one of the worst defenses in Big Ten. Those limits were most clear in his ability, or lack thereof, to move in the pocket and run when needed.

“He was limited today. That’s why we tried to mix the run and the pass in there to take some of that off of him,” Franklin said. “Obviously it’s a big part of his game that he didn’t have today.”

Entering Saturday’s contest, Illinois was dead last in the Big Ten by allowing 427.9 yards per game. However, a lack of mobility for Clifford clearly halts Mike Yurcich’s offense in a powerful way, regardless of the opposing defense.

Penn State’s running backs have struggled in a big way for much of this season, and the quarterback’s ability to move with his feet clearly helped give some sort of balance to the Nittany Lions’ attack. Despite the fact that he said postgame he wasn’t limited by the injury, the quarterback certainly wasn’t moving at 100%.

Clifford already has two rushing touchdowns this season, and Penn State could’ve used that savvy and creative option on several occasions Saturday — most notably during the run of nine two-point conversion attempts to finish overtime.

“I even talked to a couple offensive lineman going into this game… We thought that we were in a really good place with the run game,” Clifford said. “We just gotta be more consistent everywhere.”

As for the passing attack, the Nittany Lions finished with 165 yards through the air. KeAndre Lambert-Smith’s 42-yard score in the first half was the play of the day, while Clifford’s favorite target, Jahan Dotson, paced the group with six catches worth 69 yards.

The second of that pair gave a quick look into what Clifford’s preparation looked like from his perspective throughout the week.

“He was practicing with us this week. We knew he was healthy. We knew Coach Franklin wasn’t gonna put him out there if it would jeopardize his health or anything like that,” Dotson said. “He was able to play today and we’re thankful for that.”

“If Sean’s down. We gotta have the next man up. We were prepared for whoever was gonna be our quarterback today. We just gotta execute,” Dotson added.

With what was supposed to be a nice welcome to the second half of the season behind them, the Nittany Lions now must turn their focus to a trip to Columbus. Penn State hasn’t won on the road against Ohio State since 2011, and it’s hard to imagine that will change next weekend if its starting quarterback isn’t 100%.

As Clifford continues to work back to full health over the course of this week while the Buckeyes loom ahead, he and his star wideout will remain close leaders of an offense that needs a spark in every sense of the word.

“We all have tough games. We all have tough days, no matter what we’re going through,” Dotson said. “That’s why we’re brothers. We have each other’s back. I’m gonna literally text him right after this — watch the film with him. We’re just gonna try to fix this thing.”