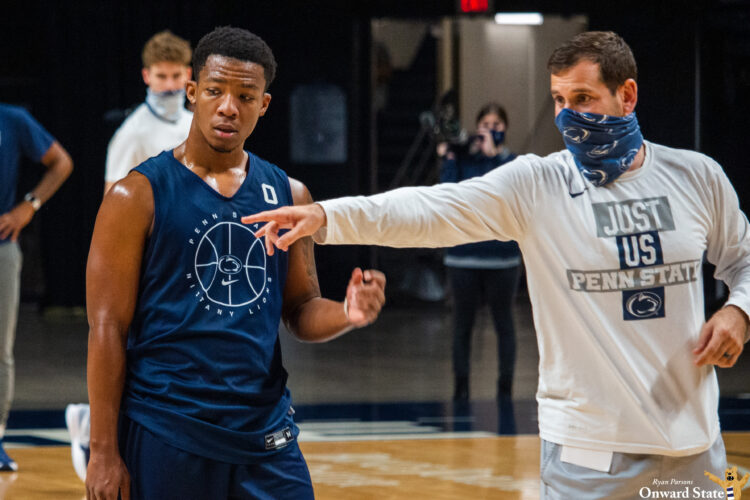 It’s not lost on Penn State men’s basketball big man John Harrar that if he’s ever going to win in Happy Valley, the time is now.

Now entering his extra year of eligibility (as granted by the NCAA due to the pandemic), Harrar was one of the key pieces that Micah Shrewsberry recruited back to the Bryce Jordan Center. Myles Dread and Seth Lundy are also a part of that club, but the former Purdue assistant couldn’t bring every member of last year’s team back in the blue and white for the 2021-22 campaign.

To name a few, Izaiah Brockington, Myreon Jones, and Jamari Wheeler all elected to move on from the Penn State program following the bumpy departure of Pat Chambers. The third of that trio made his decision to transfer to Ohio State just over two weeks after last year’s season finished.

With several high-profile exits, Shrewsberry had to hit the transfer portal to bolster up his roster. The first-year head coach made connections with several college basketball veterans through the portal, and thanks to those moves, the Nittany Lions now have seven seniors on their roster.

Former Gardner-Webb guard Jaheam Cornwall put together a dominant four-year career in the Big-South Conference. However, the Brooklyn native has made it clear that he and the rest of the seasoned players on the roster aren’t being shy about why they’re here for one last ride at the college level.

“Being a guy that made the NCAA Tournament, the first thing I said to them was, ‘I want to go back again and make a run,'” Cornwall said. “We definitely want to make that run, and we’re building a team right now that can compete in that tournament.”

Along with Cornwall, Shrewsberry also brings in transfers such as Jalen Pickett, Greg Lee, and Jalanni White, all of whom are seniors. There are no specifics on a starting five rotation just yet, but you’d think those players wouldn’t come to Happy Valley if they didn’t believe they have a chance for meaningful playing time on an exciting team.

With this in mind, Shrewsberry is still focused on developing the future of the program here, as he already has five players committed to the 2022 class. But winning now is on the forefront for him and the coaching staff, players he re-recruited, and guys he went out and grabbed in the transfer portal.

“I don’t want to put a ceiling on them in terms of ‘let’s set this goal, and if we don’t reach that goal our season’s a failure,'” Shrewsberry said. “I don’t know what that goal is gonna be for our team this year. But we’re putting ourselves in position to have success as a team. I want them to dream big and do what they want to do because I think they can.

“I want them to have that win-now mentality. I love these guys because the older guys have a chip on their shoulders. They know their opportunities are limited,” Shrewsberry added.

As hungry as the players and their head coach are, there’s no secret that there’s plenty of question marks surrounding this team. The Nittany Lions finished 11-14 under interim head coach Jim Ferry last winter, and that was followed by that mass exodus of star players. Shrewsberry managed to retain some talent and bring in those names from the portal, but how this group gels together in an all-new situation remains to be seen.

The head coach fully understands some of that chatter surrounding his new squad, but he doesn’t mind it in the slightest. Leading up to the teeam’s season opener on November 10, Shrewsberry appreciates that underdog status.

“I love being a team that’s kinda counted out. I love the underdog mentality,” Shrewsberry said. “I love being able to go in and just swing freely. I love it. Nobody expects us to do anything? That’s great. Keep thinking that way. Keep talking to us…All it’s doing is driving us. It’s fueling us to try and conquer expectations.”