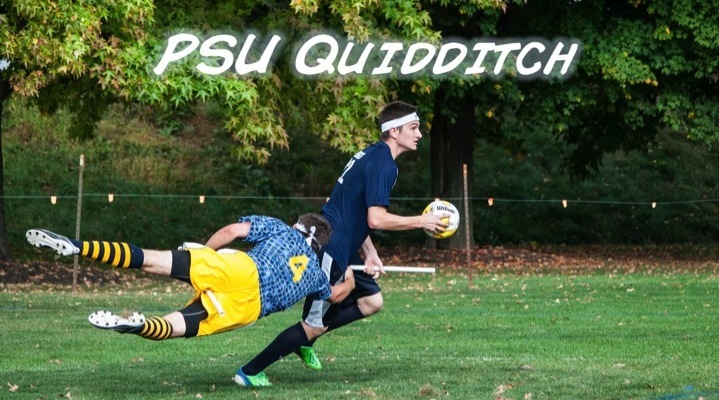 Quidditch is not a child’s game. The co-ed sport — described as a mixture of rugby, handball, and dodgeball — is played on college campuses and communities across the country and around the world, with the end goal of qualifying for the International Quidditch Association’s World Cup.

Penn State’s own Quidditch team hosted the Nittany Invitational this past weekend, its first intercollegiate tournament of the year. Schools such as Maryland, Pitt, and NYU traveled to State College for a shot at the tournament crown. (For a full breakdown of each team, you can read a preview of the tournament written by the International Quidditch Association’s “Mid-Atlantic Correspondent.” No, we didn’t just make that up.)

Wish you could have seen it? Don’t worry, Onward State captured the sights and sounds of the tournament for you right here:

You might be curious — if the Quidditch of Harry Potter is played with magical brooms, enchanted Bludgers, and a self-propelled Flying Snitch, what is the sport that these Muggles are playing? Well, the brooms are replaced with PVC pipes, the Bludgers are dodgeballs, and the Snitch is a gold-clad human with a tennis ball attached to his waist, which Seekers attempt to capture to score 30 points and to end the match.

The rules of the game are similar to the Quidditch of Harry Potter, minus the flying and adding the full-body tackling of rugby. Each team fields seven players:

Basically, Penn State Quidditch is just like any other athletic team, right down to their pregame cheer:

The Quidditch team even has a coach!

Despite its early loss to NYU in pool play, Penn State advanced to the finals in tournament play, where it suffered a tough loss to Maryland, 120-50. However, take solace in the fact that Penn State crushed Pitt, 130-50.

We got Second Place overall at the Penn State Nittany Cup! Thanks so much for everyone who came out and supported us! http://t.co/Sw9ZxTK4tR — Penn State Quidditch (@PSUQuidditch) October 7, 2013 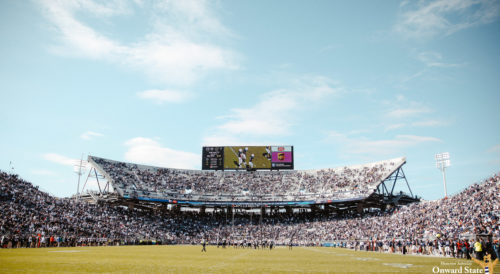 Share via
Sights and Sounds from the Quidditch Pitch: Penn State\'s Nittany Invitational
https://onwardstate.com/2013/10/07/sights-and-sounds-from-the-quidditch-pitch-penn-states-nittany-invitational/
Follow @onwardstate
Send this to a friend