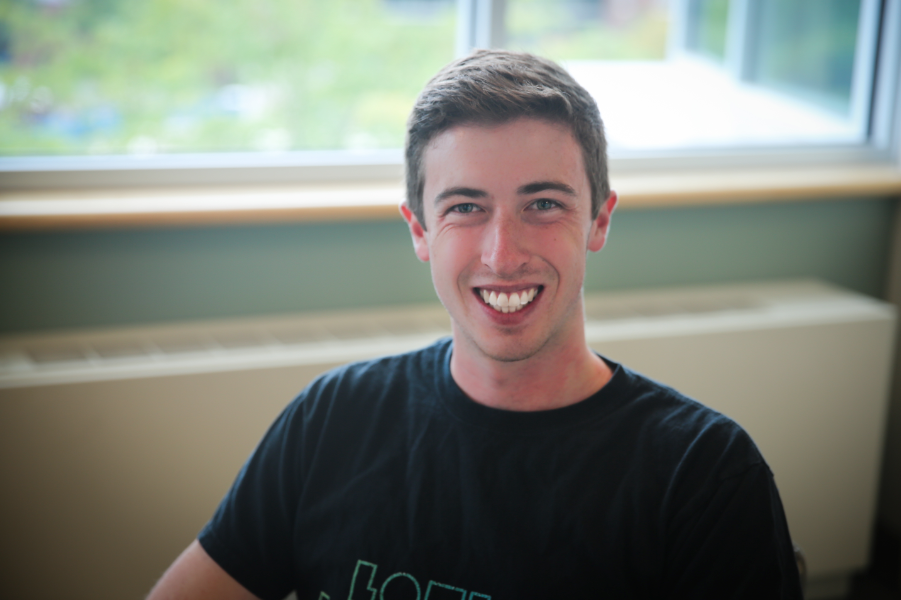 With THON season in full swing, we conducted a series of interviews with each member of the THON 2014 Executive Committee in order to better connect the Penn State community with the leaders of the largest student run philanthropy in the world. This week features Technology Director Patrick Lafferty.

Fun Fact: I’ve never been stung by a bee in my entire life.

Onward State: Why did you apply to be a part of the Executive Committee for THON 2014?

Patrick Lafferty: I came up on the organization side of things, so I was really involved in Ohana for pretty much my whole college career, and then served as president last year. I spent two years on the executive team for Ohana and both years it was just such an unbelievable experience for me to be able to be such a driving factor of the success of something I care about so much was so amazing to me. I knew I had another year ahead of me. All year I was kind of looking forward to taking the year off, but then THON weekend came and I danced for Ohana and the total was raised and it was like in an instant, in that moment, I was like I need to do more, and I want to do more for this organization. It was in that moment that I decided to apply for the Executive Committee, because I think that there is a unique perspective I can bring, coming from the org side, and if there is any more work I can do for this organization, that’s something I want to be a part of.

PL: We do any and all things Tech. One of the funny misconceptions about Tech is that we also do the videos and stuff, and I always have to tell people no, that’s Entertainment. We do really just Technology. We deal with all of our websites mostly. So THON.org, a public website, the THON store, as well as the PASS system for THON weekend which is just a web application that we run on all the computers in the BJC THON weekend, as well as THINK, which has kind of been our biggest project this year with the rewrite of THINK into THINK Ahead. Obviously the first two are just regular public websites and content managing systems, and then the last two are database management systems. So we track 15,000 plus volunteers’ activity, all of their fundraising efforts and everything go into THINK mostly, and a little bit into PASS, and we manage and display all that information to whoever needs it to do their job in THON. We also have the mobile application. That’s something new that we’ve been working on, and while it’s still in its infancy right now, we have been spending a lot of time this year to bring the mobile app up to speed and have it actually be something usable for the THON community. My responsibility amongst all of those is really just overseeing my development teams. It’s a lot of resource management; making sure that if a project needs more hands on than another project that I’m allocating projects to all of my captains in a sensible way. I’m also making sure that the needs of the rest of the Executive Committee are being met on all of the solutions that we’re creating on these sites, and I think that kind of shows exactly what the Technology Committee is all about. We’re there to make the rest of the THON community’s lives easier. So that’s a big part of my job is just making sure that things are easy to use and get things done in the right way, and not just get the job done, but actually provide a solution to the people that will be using it.

OS: What are your overall goals for this year? What are you looking to change and improve to make the Technology Committee the best it can be?

PL: Coming into this, the biggest thing for me was to reduce the amount of times that you hear from someone in THON, “Oh, THINK is down again.” Just to bring that number down, and with the rest of our sites as well; not just THINK but the PASS system, THON.org, the THON store, and all of that. We did a lot this summer that’s really going to help us reach that goal. One of the problems that we’ve had with THON in the past is that we’ve hosted all these sites on servers. Not to get too technical, they’re being hosted on machines that are really underpowered for the amount of people that use them now, because technology has become such an integral part of THON. So we moved them onto entirely new machines that are significantly more powerful and significantly more efficient, so there’s a good chance that these sites won’t go down this year, which I think is really exciting for Technology, especially for how critical THINK is becoming in a lot of different aspects. Other than that, obviously just continually improving efficiencies on all of the sites is a goal of Technology every single year. It’s right in our mission statement, which is to continually provide efficient and effective solutions for the rest of the THON community, and that’s something that we’ll always continue to do. On a committee level, I’ve also been spending a decent bit of time getting Technology to have a bit more of a presence in the THON community, not just the kind of the behind closed doors coders that nobody gets to see. I’ve been doing as much as I can to give them a little bit more of a face as a committee and to kind of even out the captain experience across the board for everyone.

OS: What moment or moments are you most looking forward to during this upcoming THON year? Be as specific or vague as you’d like.

PL: I think the launch of THINK Ahead was a huge moment for us. That was something that we had just been working on all summer long, and that was such a big moment. Moving forward with the rest of the year, I’m really excited to see Family Carnival from this side of things. From the organization side of things it’s kind of hard, because you have a very limited amount of passes, and I was there for the logo reveal last year, but that’s all you’re there for. I’ve never really been able to experience Family Carnival, and to be able to be there with my captain committee and experience the whole thing I’m really excited for that. Believe it or not, I’m actually kind of looking forward to the first canning drop-off, because that’s always been an exciting moment for me, even when we’d come in to drop off money for Ohana these past couple of years. It’s just like this wow moment, like okay this is happening, THON is actually happening. All of the money is being counted up there and that’s a cool moment because it’s just kind of the start.

OS: Why do you THON?

PL: I’ve been pretty blessed throughout my life to not have cancer have affected me as much as it has affected so many other people. It’s kind of funny because it was never at the forefront of the things that I was passionate about before college, and it was actually THON that made me realize how horrible the disease is, and not only that, but the power and influence that we as a group of students have to make a change. That sense of unity and moving towards a common goal is really amazing to me and something that has blown me away year after year, and it’s only getting stronger every single year. I think it’s embodied in when people ask “What’s your favorite THON memory?” The moment that made me THON is also my favorite THON memory. It all kind of happened at once. It was my freshman year, and I had just joined Ohana right before THON and I went and I stood with Ohana, but only because I knew a couple people. And as the weekend went on, I got continuously more and more into it. And I kind of was getting wild and crazy and into the whole event, and I had one of those blue morph suits like people wear to football games. So I put one of those on and I had all my orange Ohana gear on top of it and I’m in the front playing with the Ohana letters and spinning them around and stuff, and one of our THON children, Molly Brixius, was on her dad’s shoulders on the floor, and she just looked at me. She’d never seen me before, and she couldn’t even see my face, but it didn’t even matter. She saw me just being goofy and got this big old smile on her face, and it was such a cool moment for me that such little things that we do as students can brighten a kid’s day who’s going through these bad times. So that’s why I THON.

OS: Name an event or two that you think will make this year’s line dance.

PL: I’m secretly hoping that Don’t Drop That Thun Thun Thun is going to make it in there, but I don’t know if that’s going to be possible.

OS: If you could be any dinosaur, which would you be and why?

PL: I don’t know the name of it, but whatever those big guys were with the long necks who just kind of hung out eating leaves all day. Yeah, they probably got preyed on a lot, but putting that aside that seems like a pretty chill way to live. 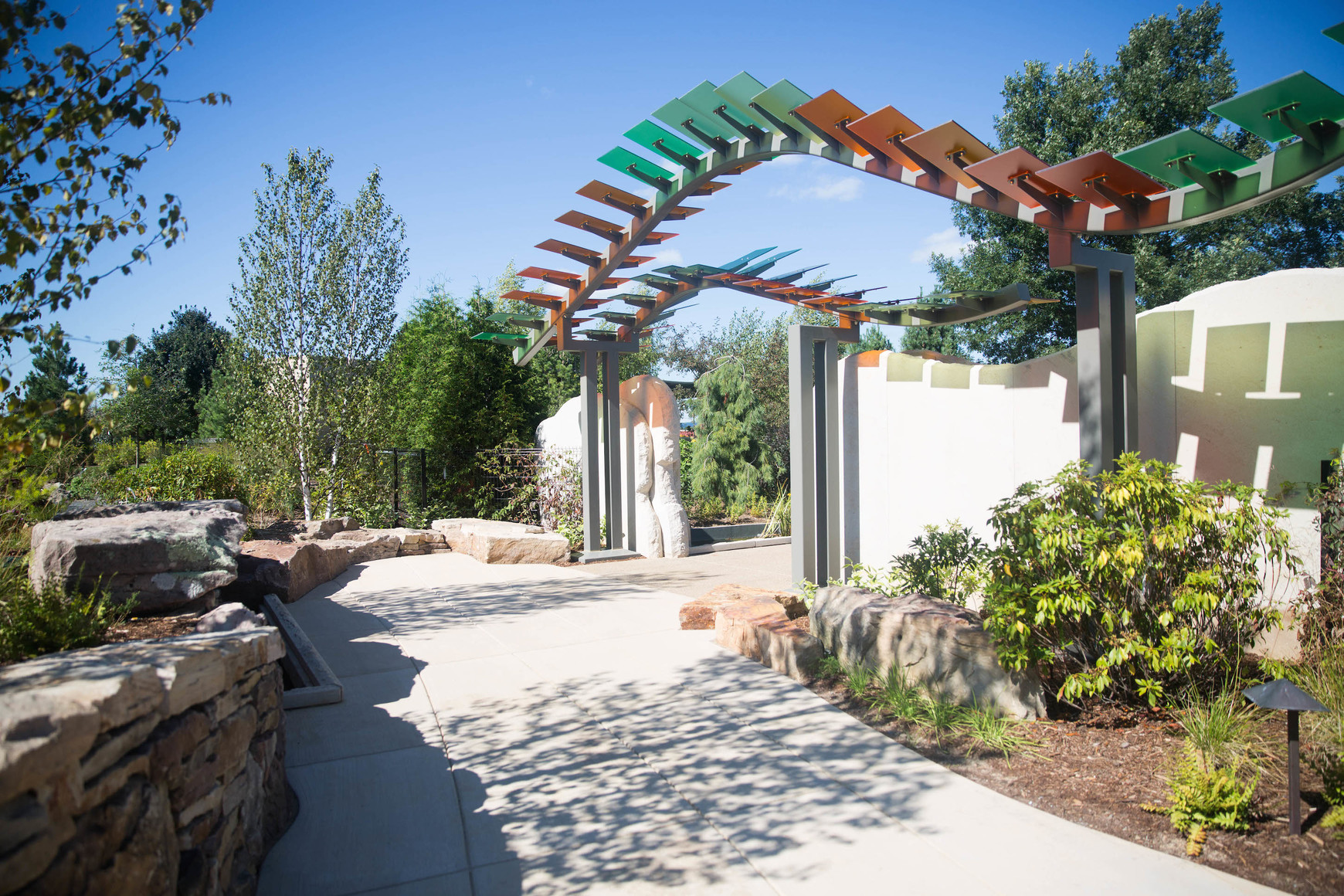 A Tour of the Children’s Garden at the Arboretum

This summer marked the opening of the latest addition to the Penn State Arboretum: a Children’s Garden. We compiled a photo tour to give you a look at what to expect on your next visit.