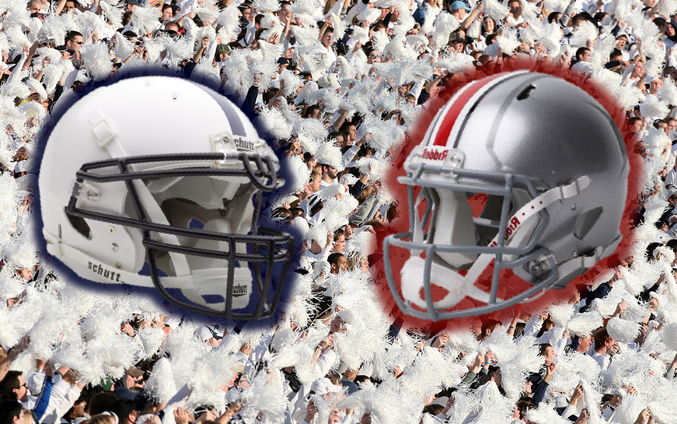 Not many have high hopes for tomorrow’s Whiteout against the Buckeyes. Penn State is a 14-point underdog after losing two straight clunkers, and Ohio State is on fire. But you never know in college football, so with that in mind, our writers took a shot at predicting how tomorrow’s game will go down.

This is only the 19th time in the last 22 years that Penn State has been a double-digit underdog, home or away. The last time? 2013, against Wisconsin, and the Nittany Lions went on to win that game by a touchdown.

Tomorrow, Penn State won’t be as fortunate. After practice on Wednesday, James Franklin made no mistake qualifying the Buckeyes as the “best” team his Nittany Lions have seen this year.

J.T. Barrett, who replaced an injured Braxton Miller before the season began, could easily enter the Heisman conversation with another big performance. He’s thrown 17 touchdowns in the last four games, a stretch in which the Buckeyes have torched their opponents for at least 50 points an outing.

Ohio State also has one of the best defensive lines in the country. Penn State has one of the worst offensive lines in the Big Ten. Offensive coordinator John Donovan will call plays from the sideline – a situation that Franklin said will make Christian Hackenberg more comfortable. But in the booth or on the sideline, neither Donovan nor the offensive line will be able to push back the Buckeyes. 4-0 looked much more promising a month ago.

Okay, if you can’t tell by now, I’m an optimist. I truly believe that Ohio State is the more talented team, and I know that the Buckeyes’ ferocious front four is (most likely) going to run rampant through our weak offensive line. What I can tell you, however, is that there will be magic in the air on Saturday night. It doesn’t get much better than a whiteout under the lights, and I think that the electric atmosphere of Beaver Stadium will propel the Nittany Lions to a victory, by a last second field goal, no less.

In order for this to happen, the Buckeyes need to play flawed. Penn State’s stout defensive unit will need to expose Ohio State’s Barrett, and force him to turn the ball over. As we saw against Rutgers, turnovers don’t always lead to points, so Hackenberg and the Nittany Lion offense will need to capitalize on these turnovers and put points on the board. Hackenberg needs to get rid of the ball quickly, as he will be under constant pressure from an Ohio State defensive line that features two surefire NFL prospects.

The students and fans will need to play their part too. It will be their job to ensure that every offensive play for Ohio State is a living hell, and they need to show the visiting Buckeyes why teams hate playing in Happy Valley. Bounces will need to go Penn State’s way, and a little bit of luck might be needed too. But I’m a believer, and I know that the Buckeyes can be defeated on Saturday night in front of a national television audience.

It might be a pipe dream, and I might end up eating my words if we get clobbered by 50, but it has to start somewhere. The past four weeks have not been pleasant for the football program, with two consecutive losses casting doubt over the team and coaching staff. Crazier things have happened, and I feel something magical is about to happen.

I hate myself for this score. Yes, it’s logical and probably more likely than a Penn State win, but just writing that I think Ohio State will win feels dirty.

Oh well. I do think that if Penn State can stop the Buckeyes early, and somehow get an even slightly competent performance from the offensive line, there is a legitimate chance at victory. But realistically, I see Penn State getting a field goal to start the game, then watching Ohio State score 17 straight points. After that, I see a Penn State touchdown late to put victory teasingly in reach, followed by a prompt Ohio State touchdown, either on the kickoff or first play of their drive. This Ohio State team is no joke, especially on one of the only places that matters against the Lions, defensive line. I’m hoping for the best, but expecting a night with more sacks than points.

If it wasn’t for the appeal of a evening kickoff and a White House, just thinking about this game would be incredibly depressing.

But hey, Penn State football is super unpredictable! The team always seems to find a way to both shockingly lose games it’s supposed to win (vs. Ohio and Virginia. in 2012, vs. Indiana in 2013) and miraculously win a game they’re supposed to lose (vs. No. 24 Northwestern, Wisconsin in 2012, vs. No. 18 Michigan, No. 14 Wisconsin in 2013). The No. 13 Buckeyes certainly fall into the second category.

I’m cautiously optimistic that Penn State’s defense can handle Barrett, because although the freshman has accounted for 1,433 all-purpose yards and 20 touchdowns over the past four games, it came against inferior competition in Kent State, Cincinnati, Maryland, and Rutgers.

The Lions’ defense will be the first real test for Ohio State’s young signal caller. To quote defensive coordinator Bob Shoop, Penn State’s front seven is “legit,” and should be able to limit the Buckeyes offense.

However, the offensive line will remain a mess, and it’s not getting any favors this week having to face a stout defensive front coached by Larry Johnson Sr. I think Hackenberg improves after a rough past two games and shows flashes of the top-tier quarterback he’s capable of being, but unless the protection improves, it’s going to be a long night for the Nittany Lion offense.

The No. 13 Buckeyes come in to Beaver Stadium having dropped 50+ points in each of their last four games. The Nittany Lions’ sixth-ranked scoring defense may break that streak, but this Ohio State team is still thoroughly good.

Before the season, Hackenberg and Ohio State’s Braxton Miller (and Michigan State’s Connor Cook) were predicted to duke it out to establish who the best Big Ten quarterback is. When Miller went down with an injury, many Penn State fans, myself definitely included, hoped that Hackenberg would distance himself from the competition. But with 17 passing touchdowns in the last four games, it’s been Miller’s replacement, J.T. Barrett, who has been looking elite while Penn State’s offensive line has held back Hackenberg’s production.

Almost all statistics point to this being an easy win for Ohio State, but protecting Beaver Stadium is certainly possible for the Nittany Lions. If the team can feed off of a crazy home crowd, the defense maintains its disruptive, dominant play, and (here’s the toughest part) the offense can produce long scoring drives, keeping Barrett and Co. on the bench, the game will be more interesting than most experts expect.

Those are all “ifs,” though. If the game doesn’t go Penn State’s way, well, at least we play Temple in three weeks.

For the first time all season, I’m changing my tune. Penn State has a very good defense, but it’s going to be on the field an awful lot, because the Buckeyes’ line is incredible, and our offensive line is, well, not. In fact, I don’t see Hackenberg finishing this game. This could get so bad it’s time for Trace McSorley and Michael O’Connor to get some reps, not for Hackenberg’s play, but for his safety. For all the concerns losing Braxton Miller raised for Ohio State, Barrett has been nothing short of fantastic. You have to hope the Lions can feed off the home crowd and at least cover the spread, but I’m not optimistic.

Ohio State’s defensive line is going to dominate Penn State’s offensive line at the point of attack and make it difficult for them to move the ball at all. Barrett has kept Ohio State’s offense humming even without Braxton Miller, and despite the Penn State defense’s high level of play so far, I expect the Buckeyes to put up some points. The bottom line is that the Penn State offensive line is the crucial factor that’s going to make this game non-competitive, and the Nittany Lions quite frankly should be satisfied if they narrow the margin of defeat from last season’s beatdown in Columbus.

Hey. Stay until the end of the game, students. No matter how bad it might get. You only get so many of these.