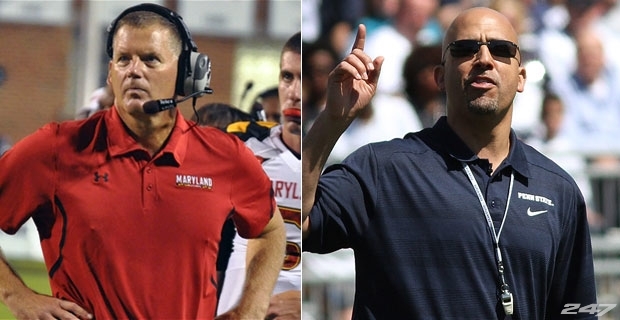 Good afternoon, Penn State fans! The Nittany Lions (4-3) will face Maryland for the 38th time today in Beaver Stadium, meeting on the field for the first time in 21 years. Penn State is looking to halt a three-game losing streak after nearly defeating the No. 13 Buckeyes last weekend in double-overtime. Maryland (5-3) is coming off a 52-7 beatdown at the hands of the Wisconsin Badgers, but the Terrapins maintain a 2-2 record and sit third in the East division in their first season as a member of the Big Ten.

We will have updates throughout the game on this page, including game analysis, photos, and more. Here’s the media information you’ll need, and here’s our staff’s game predictions.

Final: Maryland beats Penn State for only the second time in school history. Series now stands 35-2-1 in favor of the Nittany Lions.

0:23 4Q: Fumble on the quarterback sneak on 4th and 1 from the PSU 27. Penn State recovers, but that’s all she wrote. Maryland can bleed the clock with a kneel down.

3:32 4Q: Penn State forces a Maryland punt after a huge sack from freshman safety Marcus Allen on 3rd and 12. 53-yard punt by Maryland gives Penn State the ball at their own 18 yard line, looking to run out the clock. PSU leads 19-17.

11:38 4Q: Grant Haley fumbles the ensuing kickoff, and two big Maryland plays have the Terps knocking on the goal line.

End 3Q: Penn State leads 16-7. Three straight first-down completions have Maryland to the PSU 9-yard line. Terps looking to punch it in to get back into this game.

8:39 3Q: Penn State’s defense remains strong, forcing another three and out and a Maryland punt. After a 44-yard punt, Penn State takes over on their own 17.

9:33 3Q: A familiar story: back-to-back three and outs from both teams gives Maryland the ball on their own 25. Hackenberg nearly fumbles the ball away while being hit on third down, but the play is ruled an incomplete pass. Pasquariello boots a 47-yarder pinning UMD in their own end. First down Maryland.

12:06 3Q: Penn State forces a three and out on Maryland’s first drive of the second half, but can’t get anything going on their own possession. Two Akeel Lynch runs for no gain and a Hackenberg incompletion force a 36-yard punt from Pasquariello. First down Maryland at their own 36.

Halftime: Penn State heads into the locker room leading 9-7. The Nittany Lions decided to take a knee and run the clock out after Hackenberg is sacked for a loss of eight on first down from their own 11.

Hackenberg is 8-of-24 (33 percent) with 74 yards through one half of football. Three Maryland sacks and constant pressure have forced some errant throws from the sophomore signal caller. Penn State could only muster 102 yards of total offense, yet leads the Terrapins on the strength of three Sam Ficken field goals.

Maryland’s offense hasn’t fared much better, amassing only 66 total yards of offense. C.J. Brown is 8-of-18 (44 percent) for 34 yards and one touchdown.

Both teams combined for three turnovers (PSU 2, UMD 1) in an ugly first half. A total of 11 penalties for 128 yards so far.

0:53 2Q: Penn State fumbles the ball right back, as Hackenberg is sacked for 12 yards. Maryland recovers at the their own 44-yard line. The Terps drive is stalled, however, after three straight incompletions from C.J. Brown. Penn State takes over on their own 11 after a 45-yard punt that is returned for no gain by Della Valle.

3:04 2Q: A chop-block penalty pushes Maryland back to the PSU 16, where C.J. Brown is sacked by Deion Barnes on third down, forcing a fumble that’s recovered by Maryland. A 41-yard punt is fair caught by Della Valle at the Maryland 45-yard line. Penn State will look to take the lead on this drive with great starting field position.

5:06 2Q: Two big penalties on Maryland allow Penn State to move the ball deep into Maryland territory. A roughing the passer call negates a would-be pick six from Hackenberg, keeping the drive alive. The wildcat showed some promise, converting a key third down in Maryland territory, but the drive stalls after a Hackenberg incompletion on 3rd down intended for Mike Gesicki. Sam Ficken boots a 25-yard field goal to pull PSU within one, trailing 7-6.

11:21 2Q: Maryland is forced to punt after an ineligible receiver down field penalty stalls the drive. Wartman makes a key stop short of the sticks on third down. Penn State takes over on their own 43-yard line after a short return from Jesse Della Valle.

12:43 2Q: Hackenberg completes a 12-yard pass to freshman wideout Chris Godwin to move the PSU 34, but the drive stalls after three straight incompletions. Maryland will take over at their own 10-yard line after a 44-yard punt from Pasquariello and a blocking in the back penalty assessed to Maryland on the return moves the Terps back.

13:52 2Q: A personal foul penalty on freshman safety Marcus Allen puts Maryland at the 8-yard line, and C.J. Brown throws a 2-yard strike in the back of the end zone two plays later for the game’s first touchdown. Maryland leads 7-3.

End 1st: Maryland converts a 3rd and 1 at the PSU 33 after appearing to be stopped short of the first down marker. A 16-yard completion has Maryland knocking on the door of the red zone. It will be 2nd and short at the PSU 24 when the second quarter begins.

2:22 1Q: An ugly three and out features a Belton run for no gain, a sack, and a Hackenberg incompletion. A 24-yard punt from Pasquariello gives Maryland the ball at the Penn State 43.

3:46 1Q: Deion Barnes sacks C.J. Brown for six yards, and two incompletions leads to Maryland’s drive stalling at their own 32-yard line. Penn State takes over at their own 26 after the punt.

5:04 1Q: After converting a 4th and 1 from their own 29-yard line and driving into Maryland territory, Hackenberg is intercepted on an ill-advised deep pass in double coverage. Maryland takes over at their own 15.

8:43 1Q: After two late hit penalties on Penn State’s Jordan Lucas and Adrian Amos on third down give Maryland a first down at the PSU 37, Penn State’s defense holds. Penn State takes over after a punt on their own 20 yard line.

15:00 1Q: Penn State won the toss, and elected to receive. An unsportsmanlike conduct penalty will be assessed to Maryland on the opening kick.

Although it’s too early for most students after what was probably a long Halloween night of debauchery, it’s never too early for Pitt jokes. It’s windy day here at Beaver Stadium as the players take the field for warmups. Expected to be gusting at 17 miles per hour at noon. Just over 90 minutes until kickoff.

It’s a windy fall day at Beaver Stadium as Penn State prepares to meet Maryland for the first time since 1993. pic.twitter.com/hLchUGko6X