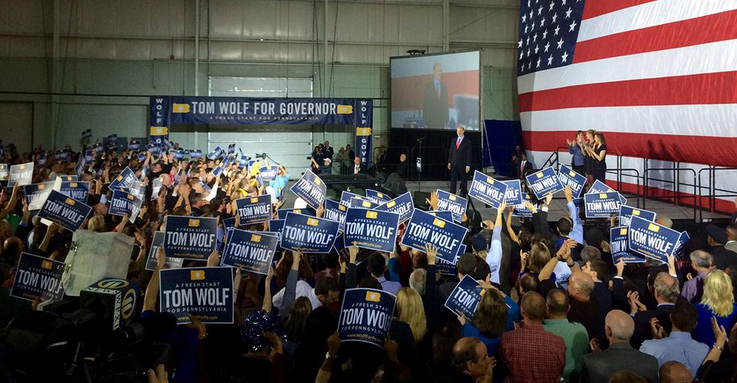 The gubernatorial race was called for Democratic challenger Wolf by multiple outlets tonight about 30 minutes after the polls closed. Wolf defeated Corbett in a race closely-watched by Penn Staters due to Corbett’s involvement in the aftermath of the Sandusky Scandal.

Wolf’s election over an incumbent is almost unheard of in gubernatorial politics — it was the first time a newcomer took down an incumbent in Pennsylvania since 1968. Seen by many as a referendum on Corbett’s past four years as governor, Wolf’s stance on many issues lay in stark contrast to Corbett’s. He ran a campaign based heavily on restoring funding to public education and tax restructing. He held a lead over Corbett throughout his campaign, and Corbett had less than a 1 percent chance to win today, according to FiveThirtyEight. In Centre County, Wolf won 57 percent of the vote.

Elsewhere locally, incumbents retained their seats. Rep. Glenn Thompson (R), the incumbent congressman for the 5th District of Pennsylvania, defeated Kerith Taylor-Strano (D) to hold his position for another two years. This will be Thompson’s fourth term after he gathered 55 percent of the vote in Centre County.

Democratic State Representative Scott Conklin, who introduced a bill to restructure Penn State’s Board of Trustees, won his race and will continue to represent the 77th legislative district of Pennsylvania in the General Assembly. He defeated Penn State senior and Libertarian Charles Martin, gathering about 83 percent of the vote.

State Senator Jake Corman, one of many to sue the NCAA over its jurisdiction on the $60 million fine to Penn State, also won in his unopposed reelection bid. He gathered about 95 percent of the vote. Finally, State Rep. Kerry Benninghoff was re-elected after running unopposed for the 171st district.