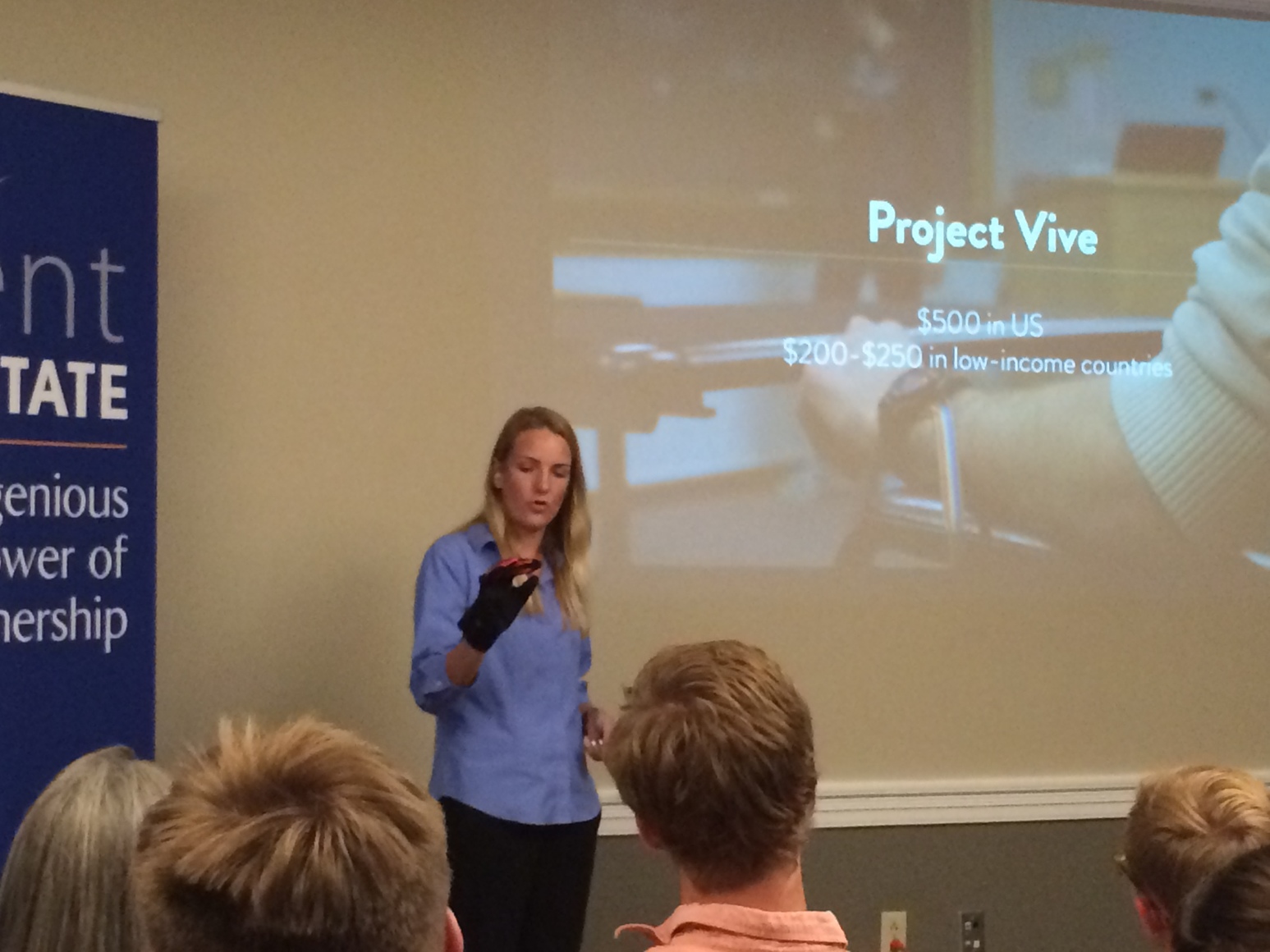 Officially introduced last February, the Penn State Summers Founders Program provides six team of entrepreneurs — all with at least one current student — a $10,000 grant to pursue a startup dream for the summer. Five of the six teams, which were introduced for the inaugural summer in April, presented their products at the program’s first “Demo Day” Wednesday evening in Atherton Hall.

The Founders Program is the brainchild of, among others, recent graduate Eli Kariv and not-as-recent-but still-young graduate Matt Brezina, both of whom pursued startup ventures after Penn State. It’s also one of the most concrete examples of President Eric Barron’s continued support for student entrepreneurship.

“I think that this is a great example of not just what Penn State can do, but what our entire community can do together,” Schreyer Honors College Dean Christian Brady said at the event.

Here’s a update of what the teams have been up to since they were first introduced in April at Pegula.

Founder and CEO Jason Cohen gave an articulate, impassioned, and technical presentation to introduce Gastrograph, an app that serves as a quality control for beverage producers. Existing technology and machinery is not predictive, meaning beverage producers can’t always detect a flaw immediately — that is, before a beverage is in the hands of the consumer.

Gastrograph works to fix that, by reviewing data in real time, then using complex algorithms to analyze a cause and solution. For now, it’s a 10-person team, and the project began as Cohen’s master thesis project.

The technology sounds confusing and somewhat abstract to a casual audience, but it seems to be effective for producers. The team turned down a $2.2 million acquisition offer, and now has trials with four of then 10 largest beer producers in the country.

When Mitch Robinson, the former head of Innoblue, noticed Microsoft Word and other word processors could not easily create resumes, he created Resume Ruby. The software helps students and professionals craft resumes through numerous templates that cater to a students’ experiences.

“We’re building software to help students and professionals stand out in the workplace,” he said during his presentation.

This summer, Robinson’s company saw 1,000 people sign up. He’s now working to diversify the its profile by allowing the resumes to be turned into professional websites, and support other job-finding applications.

The youngest of the Summers Founders teams, junior Kevin Paroda and Q-Through are working to transform three-dimensional printing. Traditional 3-D printers requires a person to manually operate the machine every time a new part, or side, of a product is printed. This process is incredibly time consuming and inefficient.

Paroda and his team of two other classmates are creating an automated, vacuum-powered conveyor belt that effectively automates this manual work.

“It brings automation to 3-D printing,” he explained.

They’ll soon begin working with a new 3-D printing lab on campus, and will turn to the crowdfunding site Kickstarter to raise funds.

This team, a male trio of three recent college graduates, is working to transform surgery with a multi-jointed endoscope for surgeons.

Rob Chisena, who presented the product, explained that current devices for endoscopic surgery are not accurate enough once they enter the body, leaving room for scarred tissue and other potential issues to arise.

“In current endoscopes, the doctor is holding onto one end, pushing it in, twisting, and he’s got another end [to control it]– it’s a simple system,” Chisena, the project manager and Penn State graduate, told us last semester. “We’re trying to make it so the doctor is not physically touching the endoscope in some way. He’s got a system where he’s got a camera and can pitch the thing left, right, up, or down as he sees fit.”

The endoscopic market is taking off, and Chisena expects it to increase $10 billion in the next 10 years. To keep up, or stay ahead, they’ve partnered with surgeons at the Hershey Medical Center to turn this product that they controlled with an Xbox controller in April into a more feasible reality.

Senior Mary Elizabeth McCulloch was working at a special needs orphanage in Ecuador when the initial seeds for Project Vive were planted. Though severe speech disabilities affect many across the globe, there are no affordable tools to give a voice to those with nonverbal communication disabilities.

The existing market includes two major groups of products: LCD screens with picture icons that produce words or phrases, and eye tracking software. Both start in the thousands of dollars, and ultimately approach $60,000.

The simple product consists of a glove and an earpiece. Using her finger, McCulloch scanned through menus that played in her ear to compose a thought. Seconds later a brief sentence played, a scene that thoroughly impressed the sizable audience.

“[This] ensures anyone can have a voice, and that we won’t have to take it away,” she said.

The Undeniably Fit team wasn’t present at the Demo Day, but here’s our description when they were first introduced:

“UFit Thrive,” according to its website, “is a fitness program for people living with diabetes created by Undeniably Fit, LLC — a company with a mission to change the lives of people living with chronic illnesses by creating comprehensive fitness and wellness programs for them. We created UFit because diabetes can be stopped and we want to be a part of the movement against diabetes.”