Tyler Oakley Sends Heritage Hall Into A Fit Of Giggles 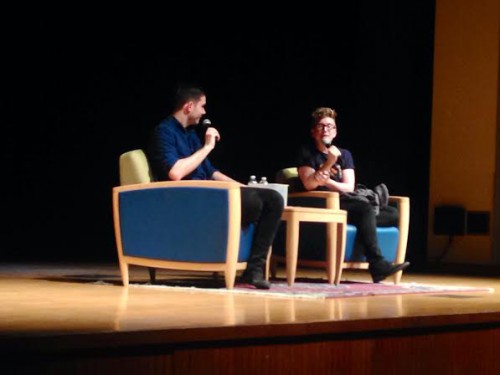 “So there I was as an RA,” Tyler Oakley laughs, “Busting this kid in a baby costume, diaper and all, for having a baby bottle full of whiskey.”

Thanks to the Student Programming Association, YouTube sensation Tyler Oakley came to perform for Penn State as a guest lecturer. Oakley’s recollection of his misadventures as an RA were, without a doubt, priceless. But that doesn’t even begin to cover the hilarity that ensued in Heritage Hall last night. We were lucky enough to speak with Oakley and learn more about his unique story.

Oakley has been taking the internet by storm since 2007. He attended Michigan State University, where he studied communications. During his time in East Lansing, he discovered his passion for vlogging and social media.

While a student at Michigan State, Oakley worked at the school’s telemarketing center and helped develop a digital presence in their career services network. This sounds like a fairly normal college path, however, while managing his curriculum and extra curriculars, Oakley was also busy building his online empire.

“Everything I did helped me with learning to effectively communicate and advertise, foster communities, and market myself. I never regretted MSU, it always felt like the right choice for me.”

Eight years of hard work and dedication later, Oakley is now a notable name in the entertainment industry. With over eight million subscribers and 559 million total video views, Oakley has truly made a name for himself — and he’s not stopping any time soon.

Accompanying Oakley during his lecture was Korey Kuhl, Oakley’s best friend. The duo had dynamic energy, and fed off of each other extremely well. The two met at Michigan State, and had a handful of stories and silly moments to share. Oakley discussed his experience moving from Michigan to San Francisco, as well as his final destination and current home — Los Angeles.

Oakley figured San Francisco would have more options for social media positions, his initial career choice, and he was right. After a few years in the bay area, his YouTube presence started to really pick up. He found himself flying down to LA more and more.

“I decided that if I wanted to really make it happen, I’d have to go where my management was, where the entertainment industry was, and where the YouTube community was,” he explained. “Three years later, I definitely think I made the right decision.”

The YouTube sensation wasn’t selfish, giving advice to aspiring social media celebrities. He emphasized the importance of individuality and honesty in one’s work — attributes that truly shine through when trying to gain a viewership.

“Be yourself — nobody wants to subscribe to you if you’re emulating something that already exists and is successful. Don’t give up — it took me five years for my channel to be big enough to go full-time. Do it for the right reasons.”

Oakley kept Heritage Hall lively throughout his entire performance, stopping frequently to allow the hundreds of students to giggle uncontrollably. He even wrapped up his lecture with the “We Are!” chant, documenting the entire experience on his SnapChat account.

To wrap up the interview, Oakley was faced with the quintessential Onward State question. If you were a dinosaur, which one would you be and why?

“Maybe a Brontosaurus? I used to love Little Foot in Land Before Time. That’s a hard question! Surely not whatever Ducky was, she was so annoying.”

Share via
Tyler Oakley Sends Heritage Hall Into A Fit Of Giggles
https://onwardstate.com/2016/03/18/tyler-oakley-sends-heritage-hall-into-a-fit-of-giggles/
Follow @onwardstate
Send this to a friend