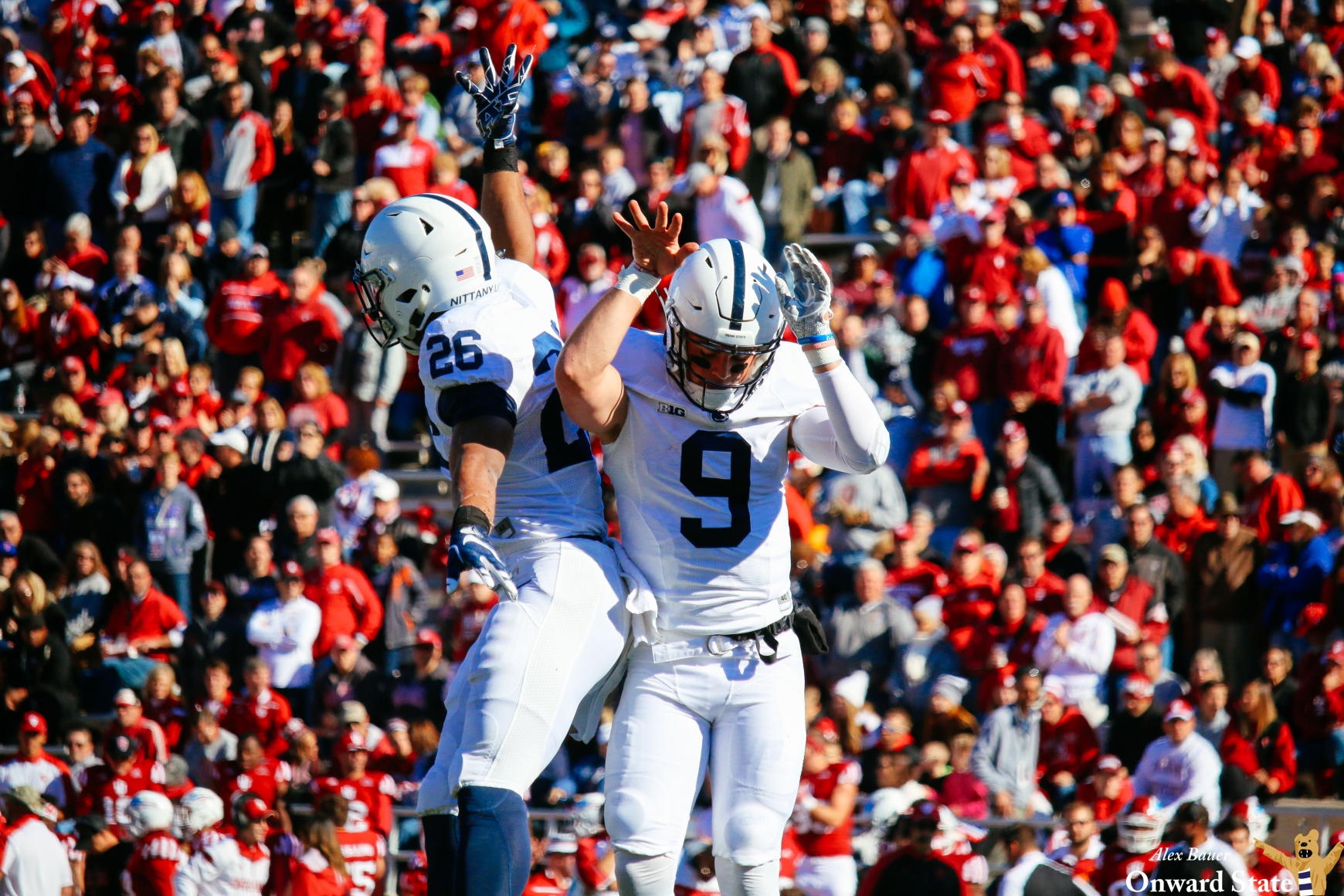 No. 10 Penn State (8-2, 6-1 Big Ten) packed up its iconic white uniforms for a business trip to Bloomington. James Franklin’s Nittany Lions entered Saturday’s noon clash at Memorial Stadium ranked inside the Top 10 for the first time since 2009. They extended their win streak to six games in a close 45-31 victory.

Indiana won the opening coin toss and elected to defer its choice to the second half. Trace McSorley, decked out in a fresh white sleeve and glove, led the Nittany Lions down the field on a prompt seven-play, 60-yard drive. McSorley burst up the middle on third and goal from the 10 to make it 7-0 Penn State with 11:28 to go in the first quarter. That feat marked the third straight game Joe Moorhead’s offense scored on its first drive.

Brent Pry’s defense held the Hoosiers to five plays on their next series. Sophomore corner John Reid resumed his punt return duties and picked up 19 yards to the Penn State 29. Freshman punter Blake Gillikin made the play of his career as the Nittany Lions were forced to boot it away. Despite a botched snap, Gillikin managed to retrieve the ball and spectacularly get the punt off, saving roughly 50 yards of field position. After holding Kevin Wilson’s bunch to another brief offensive series, the Nittany Lions immediately got cooking with a 45-yard toss from McSorley to Mike Gesicki. However, the redshirt sophomore signal caller would come out of the ballgame with an apparent injury later in the series. Backup quarterback and Indianapolis native Tommy Stevens replaced him in the lineup, yet he was stopped short of the chains on fourth and two. McSorley would be back out there the following drive, but the Nittany Lions couldn’t get much going and would be forced to punt. Paris Palmer went down with an injury and was replaced by redshirt freshman left guard Ryan Bates. Derek Dowrey took his old spot, and Chasz Wright made his first start at right tackle in place of Brendan Mahon.

Lagow led a balanced Indiana drive deep into Penn State territory that culminated in a five-yard touchdown pass to Ricky Jones in the right corner of the end zone. The Hoosiers tied things up at 7-7 with 12:13 before the half thanks to a steady picking apart of the Nittany Lion secondary through the air. Penn State gambled on fourth and one near midfield, but Saquon Barkley was stuffed for a deflating turnover on downs. Senior safety Malik Golden gave Penn State a much-needed spark by recovering a fumble at its 46-yard line. Despite being forced to punt once more, the Nittany Lions got another gift when Indiana muffed the catch on the six-yard line. McSorley hit Chris Godwin on first and goal and Penn State took a 14-7 lead with 4:43 left before the break.

McSorley would later throw his first pick since Michigan on first down as he tried to find DeAndre Thompkins, but Rashard Fant wrestled the ball away. Indiana would draw even at 14-14 on a 12-yard touchdown run by Devine Redding with 1:00 on the clock. The Nittany Lions were swallowed up on their final drive before the half, heading into the locker room gripped in a tie.

Penn State is tied with Indiana 14-14 after an ugly first half. pic.twitter.com/G8HXg9YVs5

Lagow and the Hoosiers started the second half refreshed as the junior quarterback hit Nick Westbrook for a 34-yard gain into Penn State territory. Griffin Oakes would drive home a 47-yard field goal to give Indiana a 17-14 lead a little over three minutes into the third quarter. McSorley would throw his second interception of the afternoon — this time to Tony Fields — on the Nittany Lions’ next drive. Redding came up just short of the goal line on third down, and Indiana would go for it on the one-yard line. After Jason Cabinda went down hard a few plays earlier, Brandon Smith took his place and made a huge deflection on fourth and goal to give Penn State the ball back.

The Nittany Lions settled for a punt but were able to avoid going down by two scores thanks to some clutch defense. Gillikin’s boot was fair caught at the Indiana 26-yard line. Marcus Allen saved a touchdown as backup quarterback Zander Diamont found Camion Patrick for a 52-yard gain. Redding would waltz into end zone for his second score of the day from six yards out as Indiana went up 24-14 with 3:13 to play in the third quarter. Penn State got the shot of adrenaline it needed when McSorley dropped on a dime to Saeed Blacknall for 43 yards down the left sideline. Chris Godwin’s second touchdown of the game, this time from 21 yards,  would cut Indiana’s lead to 24-21 just before the end of the third quarter. After stuffing Indiana’s offense for a quick three-and-out, Gregg Garrity checked in to return the ensuing punt at the Penn State 24. A bit of flea-flicker trickeration by the Nittany Lions worked to perfection as Barkley tossed it back to McSorley, who found a wide-open DaeSean Hamilton for 54 yards. Barkley would finally break through for his first touchdown of the day from four yards out to give Penn State a 28-24 advantage with 12:23 to play.

Lagow led the Hoosiers right back, though, as they hit paydirt from 40 yards when he found a wide-open Nick Westbrook to regain the lead, 31-28, just over a minute later. A costly offensive pass interference call on Saeed Blacknall thwarted Penn State’s next drive and forced Gillikin on to punt. When they needed it most, the Nittany Lions came up with a huge three-and-out with the help of a holding call on Indiana.

Steven Gonzalez checked in at left guard, flipping Dowrey to the right on Penn State’s next drive. McSorley found Godwin for another enormous play then Barkley dragged a pile of defenders to the Indiana two-yard line. He would cross the goal line shortly after for his second score and a 35-31 Penn State lead with 3:58 to play. Tyler Davis added to the cushion with a 39-yard field goal to make it 38-31 with 1:09 left. Torrence Brown’s fumble recovery for a nine-yard touchdown capped the scoring at 45-31 and gave Penn State a few style points. The Nittany Lions improved to 19-1 all-time against Indiana and breathed a deep sigh of relief as the final whistle blew.

Though his two interceptions gave the Hoosiers some momentum, the Ashburn, Va., native finished 16-of-30 passing for 332 yards through the air and three total touchdowns (one rushing) in a gritty comeback.

The Nittany Lions travel to Piscataway, N.J., for a primetime tilt with Rutgers at 8:00 p.m. on Big Ten Network next Saturday. 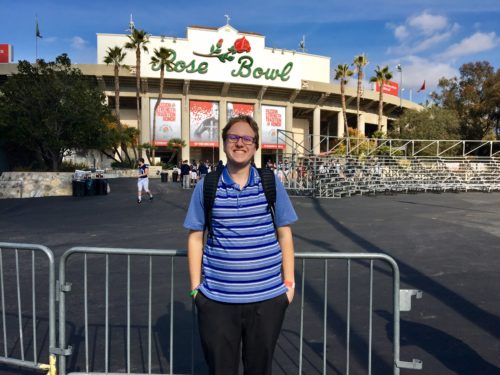