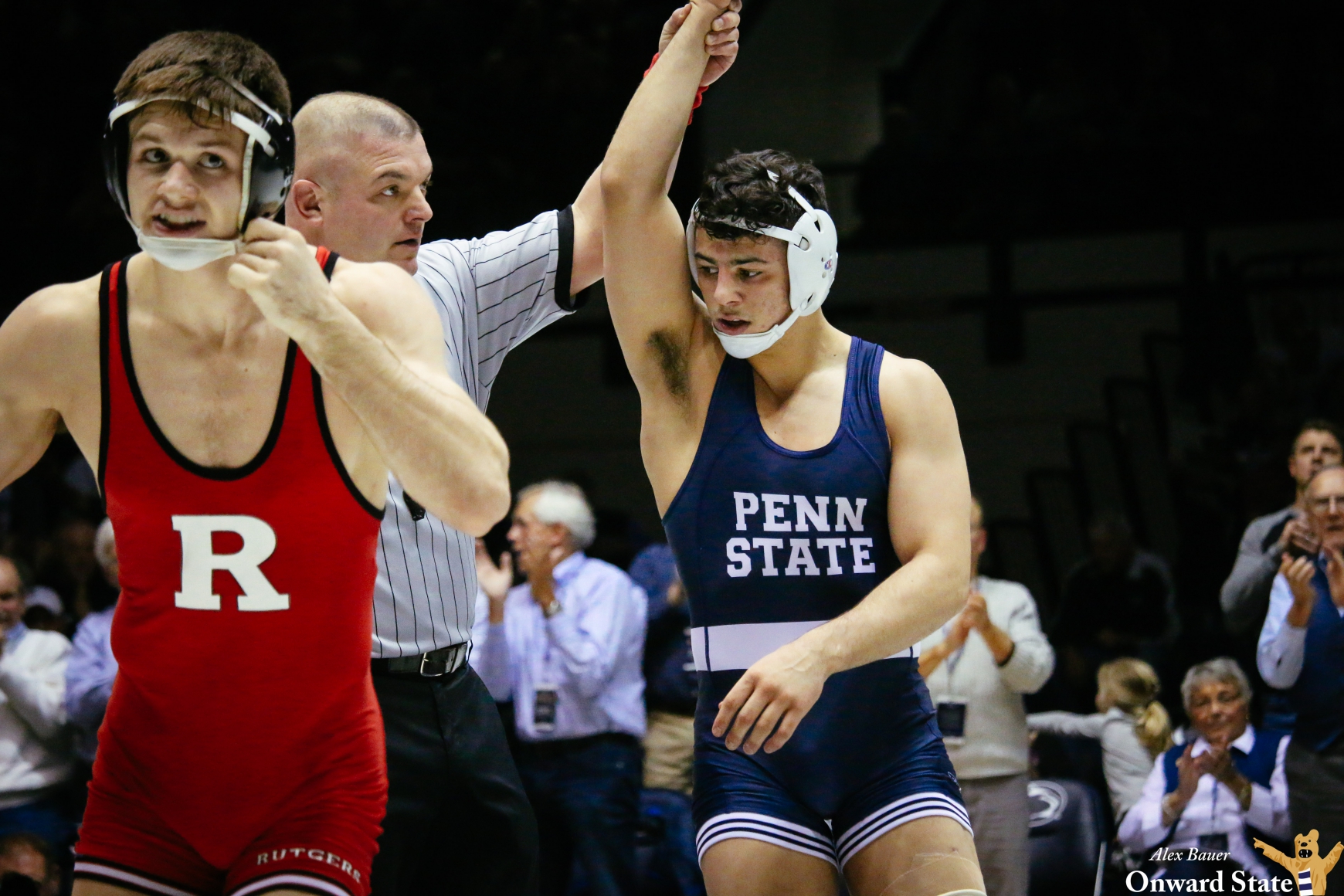 With Wednesday’s news that Nick Suriano would not be competing at the NCAA Championships, Penn State seemed like it needed to put together a nearly perfect tournament to defend its national title. After a first day of the tournament where almost everything went right, it didn’t seem like the Nittany Lions could do much better. Then day two happened.

On the second day of the NCAA Championships, Penn State was 14-4 overall and 5-0 in the semifinals, as five Nittany Lions qualified for the national finals. After two days, Penn State has run away with the team score with 121 points, leading Ohio State’s 89.5 and Oklahoma State’s 86.

If the tournament were to end after the Friday, the point total would be the fifth most in program history. The 2012 team’s 143 points was the most ever by Penn State and is certainly in striking distance with another strong round from the Nittany Lions. The all-time record is 170 points, which Iowa posted in 1997 with 5 first-place finishers and eight All-Americans.

All five of Penn State’s finalists come at weights 149-184 lbs., a royal flush of five straight qualifiers. This is the fourth time in program history and second year in a row where the Nittany Lions are sending five wrestlers to the national finals. All four have been under head coach Cael Sanderson.

Defending champion Zain Retherford extended his winning streak to 63 matches and advanced to the finals at 149 lbs. with his third straight technical fall of the tournament against South Dakota State’s Alex Kocer in the quarterfinals and then pin against Iowa’s Brandon Sorensen. At 157 lbs., Jason Nolf pinned Rider’s Bryant Clagon and then majored Tyler Berger 13-5 to return to the finals after finishing second last year.

The wrestler who beat Nolf in the finals last year, Illinois’ Isaiah Martinez, will face Vincenzo Joseph in Saturday’s 165 lb. championship bout. In the quarterfinals, Joseph overcame a 4-2 deficit at the start of the third period against Missouri’s Daniel Lewis to clinch a quarterfinals berth. There, he outlasted fellow redshirt freshman Logan Massa of Michigan 5-4 to set up his third meeting of the year with Martinez, who has beaten him twice this season.

Fellow freshman Mark Hall also advanced to the finals at 174 lbs. with a 10-2 major decision over Virginia Tech’s Zach Epperly in the quarterfinals and controversial 4-2 upset over top seed and previously unbeaten Zahid Valencia of Arizona State. Late in the third period with the score tied 1-1, Valencia appeared to take Hall down but a strategic challenge by Sanderson called off the takedown and gave Hall a point due to a technical violation against Valencia. The challenge revealed a snap at the headgear by Valencia; Hall responded with another takedown to confirm his trip to the finals.

The final match of the historic evening for the Nittany Lions lasted just 61 seconds as Bo Nickal promptly pinned Iowa’s Sammy Brooks, the Big Ten champ and who he had previously pinned in :38 seconds in their dual meeting. That was his second pin of the day; in the quarterfinals, he knocked out TJ Dudley of Nebraksa with a fall.

Over in the consolation bracket, Jimmy Gulibon went 2-1 on Thursday but lost in the blood round to fall short of earning All-American status. His 6-3 loss to Kevin Jack of NC State brought his Penn State career to a close; he finished with 74-47 record. After a 2-0 first day, Matt McCutcheon dropped both of his matches on Thursday and was eliminated from All-American contention.

At heavyweight, Nick Nevills lost his first match of the day, a 3-1 loss to Duke’s Jacob Kasper but beat Pitt’s Ryan Solomon 2-0 to stay alive in the blood round and then proceeded to move on with a 6-4 win against Minnesota’s Michael Kroells.

Nevills will be competing in the consolation bracket Saturday morning starting at 11:00 a.m. on ESPNU before Retherford, Nolf, Joseph, Hall, and Nickal take the mat starting at 8:00 p.m. on ESPN for first place.

Below are Saturday’s NCAA Finals matchups. Follow our live blog and @OnwardState and @OnwardStSports for all of your Day 3 coverage.

*A fan vote on Twitter chose the 184 lb. matchup as the last bout of Saturday evening, with the action starting at 197 lbs.