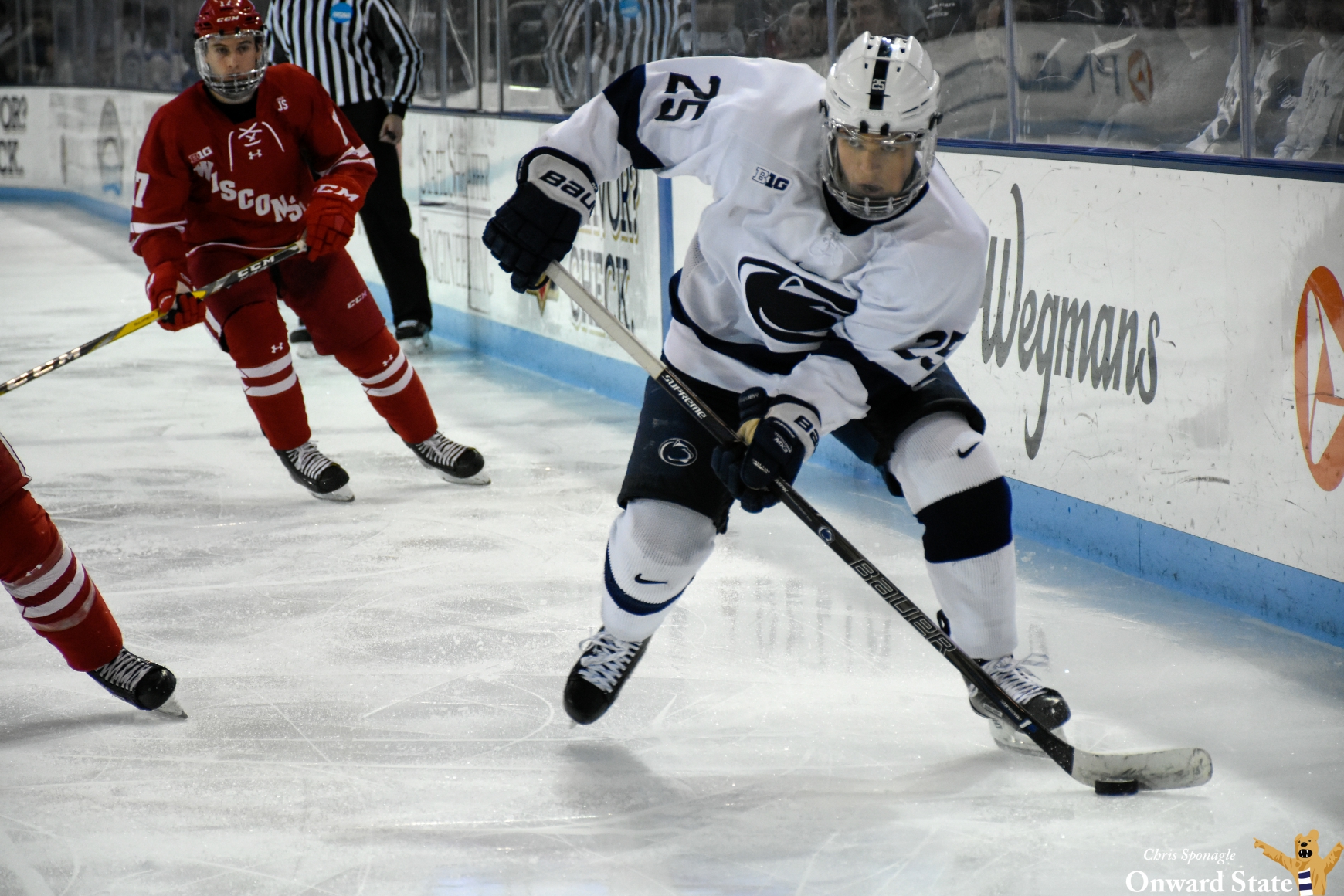 The 2016-17 NCAA hockey season officially came to a close with No. 1 Denver’s National Championship Game victory over No. 2 Minnesota-Duluth. With that, all eyes in the world of college hockey now shift towards the NHL’s Final Central Scouting Rankings, which will be released in the very near future.

Penn State freshman standout Denis Smirnov was the only Penn State player to receive a ranking on the NHL’s Midterm Central Scouting Rankings, coming in as the No. 167-ranked skater in North America. This ranking indicates that Smirnov should be drafted somewhere in the middle three rounds of the seven-round draft, but it’s never too early to speculate where the Russian will land. Here are five NHL organizations where Denis Smirnov could potentially wind up at the 2017 NHL Draft in Chicago.

Pittsburgh is the most logical NHL fit for Smirnov for a variety of reasons. First, Smirnov’s countryman and Penn State teammate Nikita Pavlychev was selected by the Penguins in the 7th round of the 2015 NHL Draft. Since the Penguins are perennial Stanley Cup contenders and routinely avoid selecting high, their prospect pool isn’t among the strongest in the league, and the only strong wing prospect currently in the Penguins’ organization is Daniel Sprong.

Pittsburgh’s amateur scouts have paid close attention throughout the year to Pavlychev; subsequently, the defending Stanley Cup Champions also became familiar with Smirnov’s game. Since drafting the talented freshman would address the Penguins’ need for more winger prospects, Pittsburgh figures to be the most likely landing spot for Smirnov.

Shifting to the eastern side of Pennsylvania, Philadelphia could be a good fit for Smirnov in this year’s NHL Draft. Although the Flyers selected seven forwards in last year’s draft, five of them are centers, and only one of them is a natural left wing.

The Flyers are willing to allow their prospects to grow in the Big Ten — with forwards Tanner Laczynski and Cooper Marody playing for Ohio State and Michigan last season, respectively. Goal scoring wasn’t Philadelphia’s biggest issue last season, but the team did finish in the bottom half of the league in goals per game. Although familiar faces like Claude Giroux, Jakub Voracek, and Wayne Simmonds all had decent offensive seasons, the Flyers’ big problem was depth scoring. The Flyers have 10 picks to use in this year’s draft, and six of them come in the middle three rounds when Smirnov is most likely to be selected. If the Flyers continue to stock up on forward prospects in the NHL Draft, then Philadelphia is another possible destination for Smirnov.

The connection between the Buffalo Sabres and Penn State Hockey is obvious, but Smirnov would fit in well to the Sabres’ prospect pool. The Sabres have a good amount of strong wing prospects in their system already, including top-10 draft pick Alex Nylander, but failing to sign ex-Harvard forward Jimmy Vesey after Buffalo acquired his rights from Nashville before his free agency “sweepstakes” last summer was a missed opportunity for the Sabres. Penn State left winger Brett Murray was drafted in the 4th round by Buffalo in 2016, so it’s clear that Terry Pegula and the Sabres’ organization are comfortable with at least one of their prospects developing in Hockey Valley.

While Smirnov alone won’t fill the void left in Buffalo’s prospect pool by the failure to sign Vesey — who scored 16 goals and 11 assists in his first NHL campaign with the New York Rangers — he would definitely add depth and offensive flair to the Sabres’ organization.

Although the Devils didn’t scout Penn State much throughout the 2016-17 season, New Jersey could be a good fit for Smirnov. The Devils’ already-weak prospect pool is being further depleted by the “graduation” of several prospects to the NHL as Miles Wood, John Quenneville, and Blake Coleman will likely be full-time NHLers next season.

The Devils do have 11 selections in this year’s draft, including five in the middle three rounds, so New Jersey isn’t afraid to dip into the NCAA ranks for prospects; forward Alexander Kerfoot, defenseman Michael Kapla, and forward Joey Anderson all played NCAA hockey last season, and all of them are currently in the Devils’ system.

Although St. Louis isn’t all that familiar with Penn State, Smirnov addresses the Blues’ desperate need for solid winger prospects. Over the past few seasons, the Blues have been one of those “tweener” teams that’s been good enough to make the playoffs and win a series or two every year, but never good enough to be considered serious Stanley Cup contenders. Therefore, they’ve traded away draft picks for veteran rentals in hopes of making a Stanley Cup run, and the picks they’ve kept have been around the 20-25 spot in each round.

St. Louis does have a few good forward prospects, including Tage Thompson and Jordan Kyrou, but both of them are centers. St. Louis has very few strong wing prospects in their system at this point, so adding Smirnov would address one of their system’s biggest needs.