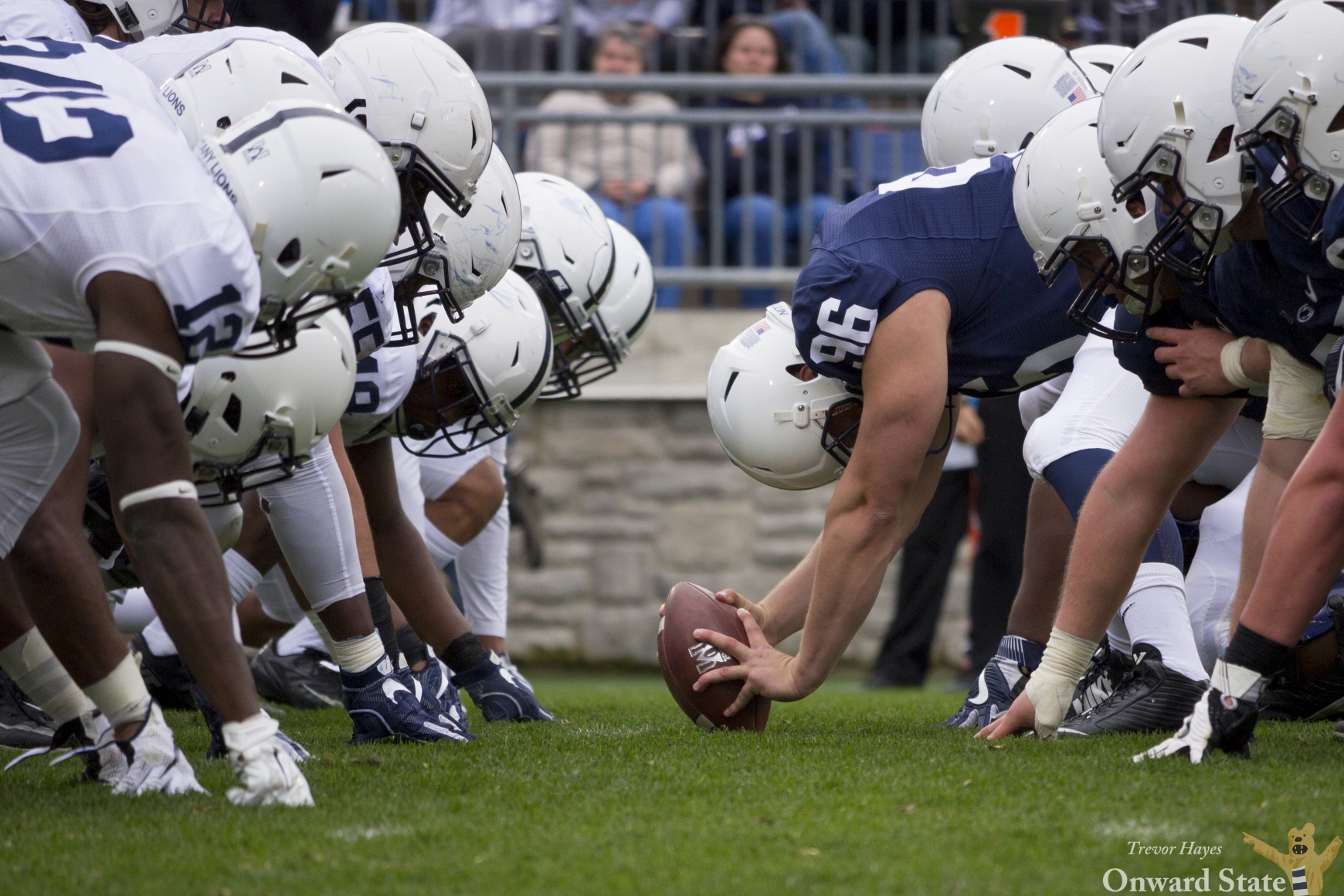 Sophomore offensive lineman Connor McGovern won’t be getting much attention following Blue’s domination of White on Saturday, and that’s probably what James Franklin was looking for with his new center.

McGovern has been primed to replace graduated center Brian Gaia, transitioning from a freshman season where he played 13 games as a right guard and earned an honorable mention to the All-Big Ten freshman team.

With a pretty smooth performance and seemingly no issues from either Trace McSorley or Tommy Stevens handling the snap, McGovern was successful. With a number of returning starters to the front line, center was a big question that had a pretty solid answer, which will be key to continuing the unit’s confidence going forward.

“Definitely confidence has grown a whole lot [in the offensive line] since last year,” McGovern said. “Last year, we were a little bit iffy about ourselves, this year we are determined to be leaders of the offense.”

Having spent a year playing alongside the former man at center, McGovern took the opportunity to learn a few things from James Franklin’s original conversion to the position.

For McGovern, learning the new role from Gaia was a lot less about the on-field workings of the position, and more about the vibe you give to your teammates to help work as a unit.

“I talked to [Gaia] a lot last year,” McGovern said. “I just remember picking up his confidence and him being a leader out there, so I’m just trying to pick up on that.”

Part of his ability to succeed early on at the position might have to do with the fact that it’s not his first time at center. Having played the position throughout high school and being recruited as a center for the Nittany Lions, McGovern was flipped all along the O-line as a tackle and guard before finally settling in at the right guard spot for the 2016 season.

Joe Moorhead’s shot gun offense is a switch from his high school’s, but the increased versatility from consistently switching positions and his opportunities through the last year to get reps in the spot have helped him quickly adjust to his newest role.

“It was completely different [in high school]. We were under center every single snap,” McGovern said. “Last spring there was a learning curve, but I was able to go [at center] last fall and I’m fine with it now.”

In Blue-White, McGovern had the chance to snap to two different quarterbacks with McSorley getting the reps in the first half and Stevens in the second.

Regardless of who’s back there to take the snap, McGovern, along with the entire offensive line, is confident in its ability to succeed going forward.

“There’s no real difference with the snap and all that. I feel very comfortable with both of them back there,” McGovern said. “I know that’s how the whole offensive line feels.”

Share via
Connor McGovern Confident In Debut At Center
https://onwardstate.com/2017/04/22/connor-mcgovern-confident-in-debut-at-center/
Follow @onwardstate
Send this to a friend