Pep Rally 2018 didn’t disappoint (not that it even could). This year’s edition was a lip sync battle — pitting the best of Penn State Athletics against each other.

Like the theme of this year’s pep rally, “Defeating Our Common Opponent,” the night was more about uniting for the cause than taking down each other. But let’s be real, men’s gymnastics took out the field again this year — earning its second-straight pep rally title by defeating the men’s golf team in the final.

Per usual, the Lionettes got things started with a performance to rally the Bryce Jordan Center crowd before the competition began.

If that didn’t get the building pumped, then a couple of surprise guests really brought the house down.

The groups of teams were broken down into two divisions: the East Team (Philadelphia captained by Stefen Wisniewski) and the West Team (Pittsburgh captained by Jesse James).

Women’s volleyball broke it down to kick off the show — going all black for the occasion.

Was the men’s soccer team’s performance for the kids — hmmm, I don’t know? With breakaway pants and ripping off their shirts, the team got the BJC a little hot and bothered after that performance.

Women’s fencing’s medley brought this back to a PG rating — incorporating some superhero costumes and Spice Girls tunes and men’s tennis took us back to the 2010 World Cup with Shakira’s “Waka Waka. 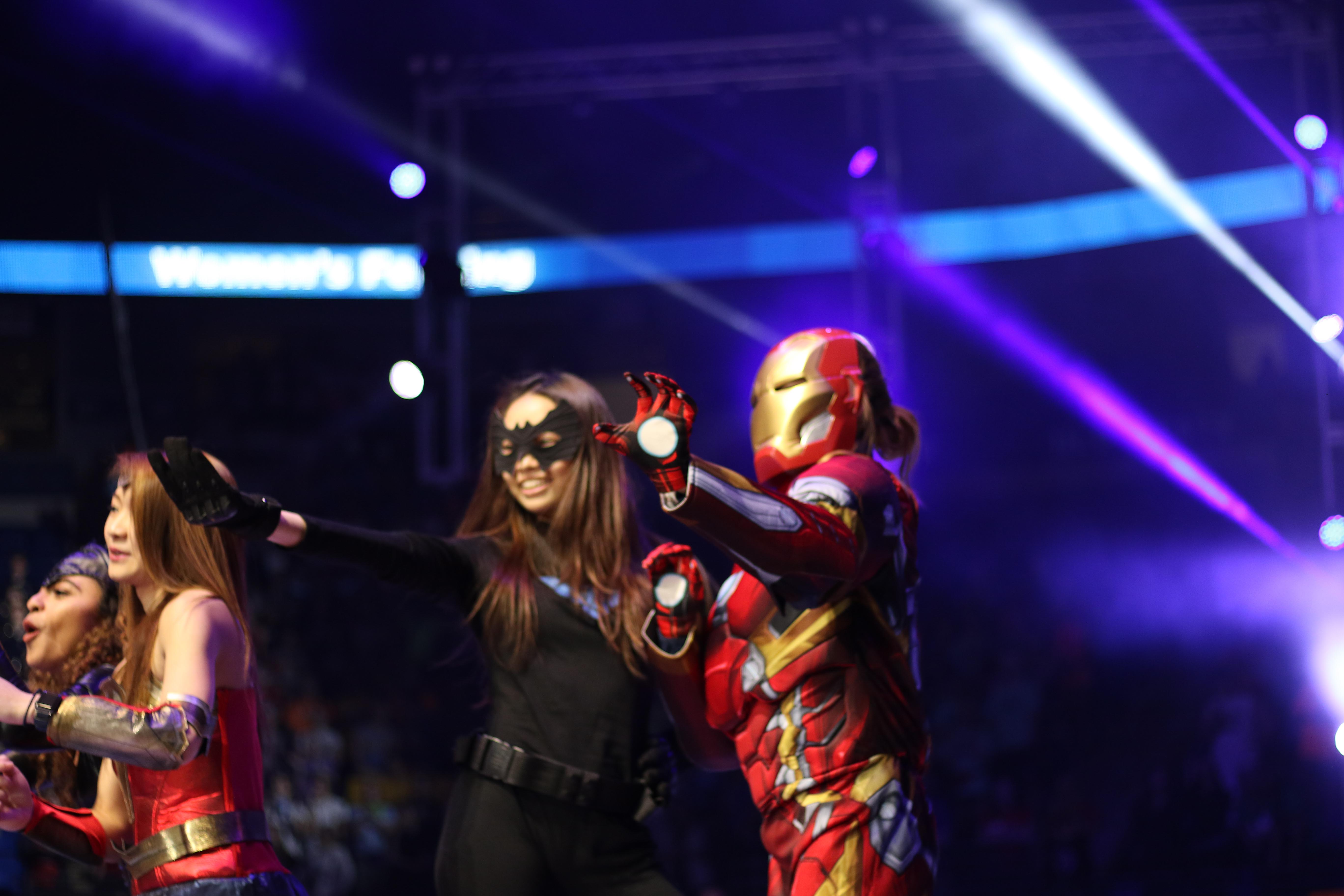 Women’s rugby had the best of the throwbacks — highlighted by Black Eyed Peas and *NSYNC mixes. Throw in a couple backflips and this team appeared to put itself in the finals conversation.

Women's Rugby showed up to the Pep Rally with high energy and awesome moves! pic.twitter.com/5WwCFeobuT

Men’s lax, team sweatsuits, sunglasses, and all following its win earlier today, brought in the dance moves, and some well-synchronized choreography.

After winning a game earlier today, Men's Lacrosse still had time to break it down at the Pep Rally. pic.twitter.com/U2uauEtWj5

I don’t know what it is, but Lil Mama’s “Lip Gloss” is apparently a big-time lip sync song with field hockey incorporating it into their performance like other teams did.

Men’s golf’s THON dancer Connor Raeman revealed his team had some tricks up its sleeve for the pep rally — that apparently included a dude in drag, a love story, and some backflips. Certainly interesting. 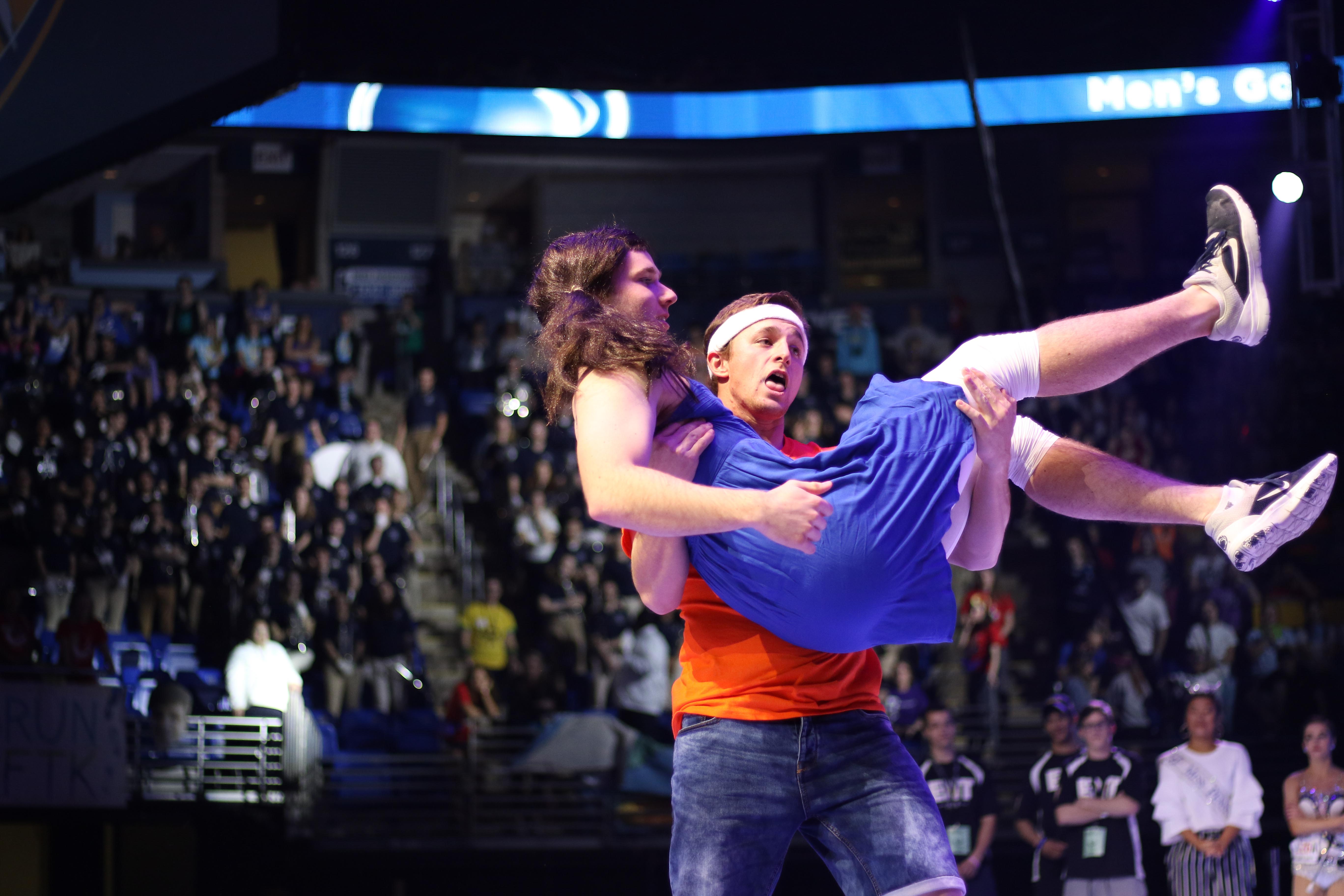 Block out them haters with some shades, women’s gymnastics. It wasn’t the top performance of the night, but it had some acrobatics to appease the fans.

The special guests all had their favorites after the West division finished up, with men’s golf receiving the most votes. Athletic Director Sandy Barbour, however, wasn’t willing to divulge a favorite.

“I love all my children,” Barbour said.

Women’s golf was all about the country theme as it opened the competition for the Philadelphia division.

Football always manages to charm the crowd (thankfully it still had the chance to). Yet despite a nice performance that included a Backstreet Boys opening and some “Swag Surfin’,” it just wasn’t at the same level as football’s pep-rally winning team from two years ago. 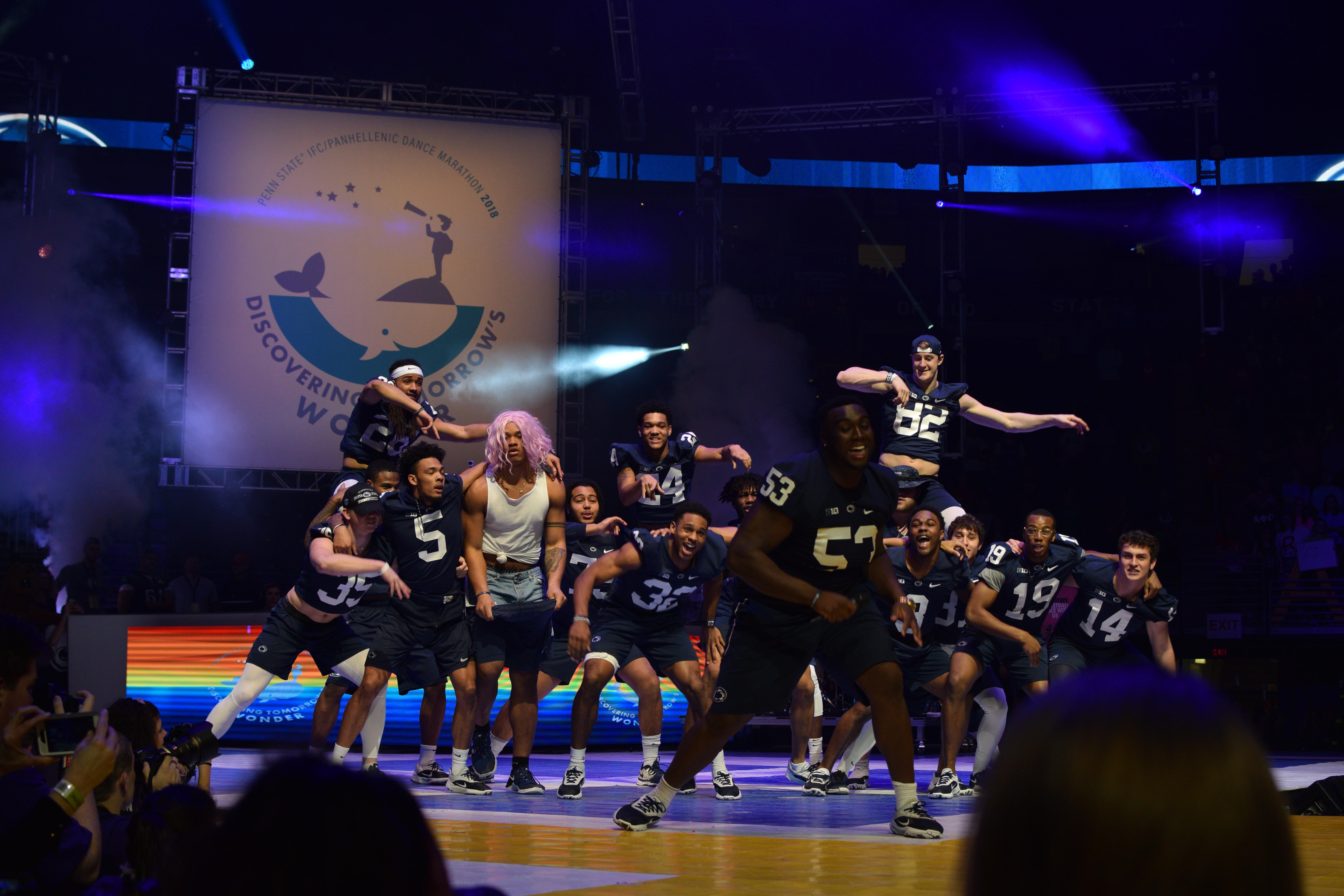 All Beyonce, all day for the women’s lacrosse team. This team’s medley song choice, along with the choreography, probably made it a fan favorite for a number of folks in the BJC. If that’s not your groove, then maybe Michael Jackson is, in which case, you’d be all about the men’s fencing team.

“Stranger things have happened here?” That’s for sure. Women’s soccer never disappoints. Bringing hip-hop, all denim, and a boombox to following its opening from the Netflix hit, Stranger Things.

Men’s swimming and diving brought the all-white tees and picked up on the *NSYNC beat, like several other teams on the night.

Women’s hockey or the Barden Bellas? We’re not sure. The Bryce Jordan Center might as well have been Lincoln Center as it brought a Pitch Perfect medley. 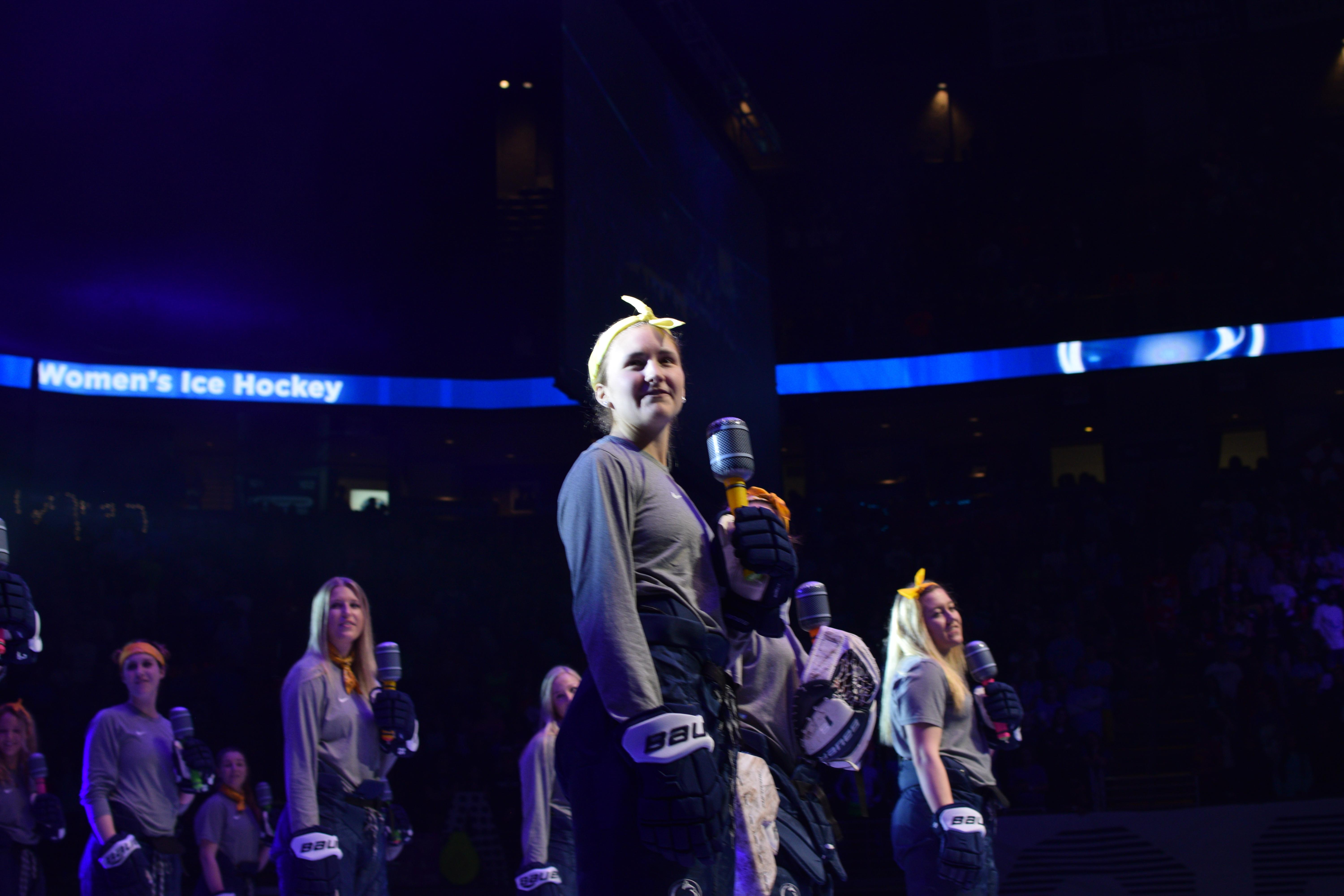 The men’s gymnastics team entered the stage to a huge ovation as reigning champions and, well, it made its case to repeat right off the bat. It had the acrobatics, it had the music (highlighted by Fergie’s “Fergalicious”), and it had the choreography. The roar of the crowd just from hearing the words “men’s gymnastics” likely secured its spot in the final, but alas, it wasn’t unanimous from the judges. 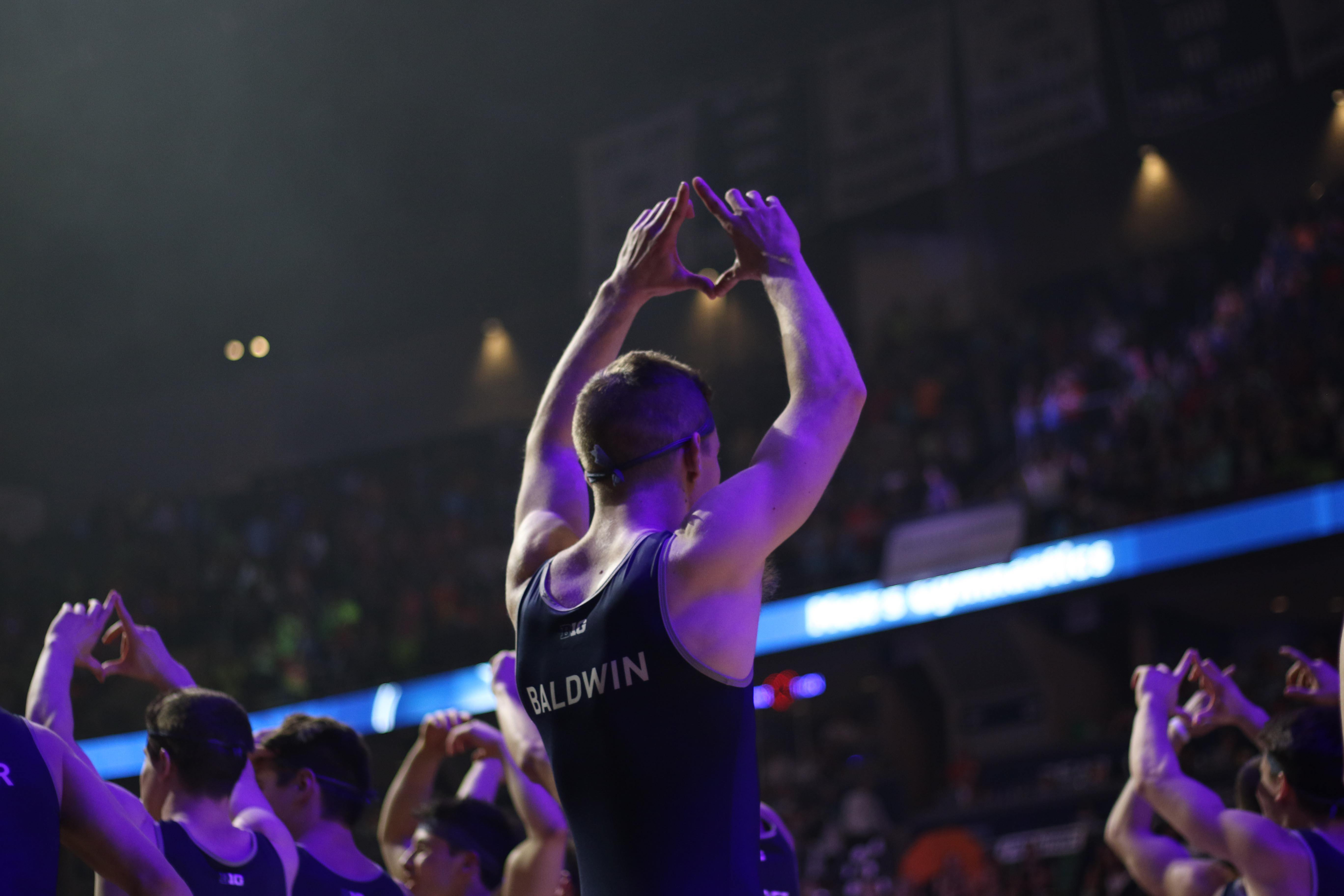 Men’s golf earned the berth to the final, much like Raeman predicted, from the West division after a tight decision. It put up a valiant effort, but it would end up having to face a dynasty for the title.

Men’s gymnastics ended up in the final from the East division, and made it clear that the decision in the championship round wouldn’t even be close. The gymnasts were synchronized down to every specific part of every song. Round of applause decided the winner and the crowd nearly blew the roof off the building — officially declaring men’s gymnastics as repeat champions.

The crowd reaction that won the Pep Rally Title for the men's gymnastics team. pic.twitter.com/6mP7OZF0Xz